If you love the rains and adventure is your middle name, then these monsoon treks are just what you need! 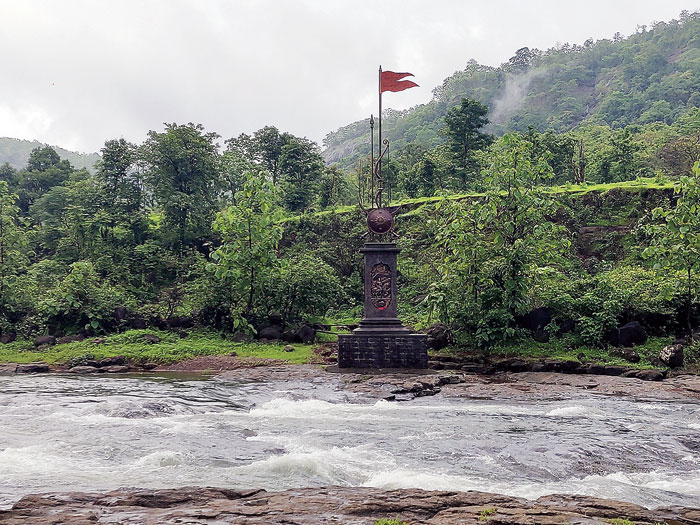 The War Memorial in Umberkhind that was later built at the place where Kartalab Khan had surrendered to Shivaji
Sourced by the author
Ushnota Paul   |     |   Published 10.08.19, 01:22 PM

If you love the rains and adventure is your middle name, then these monsoon treks are just what you need! Recently, The Telegraph was invited by Countryside Adventure Holidays on a trek with a moderate level of difficulty to Umberkhind in Maharashtra that had a walking duration of around five to six hours.

The best part about this trek was that it touched places of historical interest. It is in these khinds (ravines) that Shivaji is said to have defeated Uzbek general Kartalab Khan in 1659, when the commander was sent by the Mughal ruler Aurangzeb to defeat Shivaji. Shivaji’s smaller army managed to trap, ambush and defeat Kartalab’s armies in the dense forests in Umberkhind.

With that kind of historical backdrop, we were all raring to go. The journey started early in the morning. We took a bus from Mumbai and stopped for breakfast at a restaurant near Khopoli.

The road from there was surrounded by lush green with trees on both sides of the road. It was raining on and off as we reached our base — Chavani village. From there the group started its trek, where we retraced the route that Shivaji had taken during his face-off with Kartalab.

The walk began from Umberkhind, where we saw the War Memorial — it was later built at the place where Kartalab had surrendered to Shivaji. We made our way through the Kurvande Pass and this part of the trek was the most difficult because we were ascending. 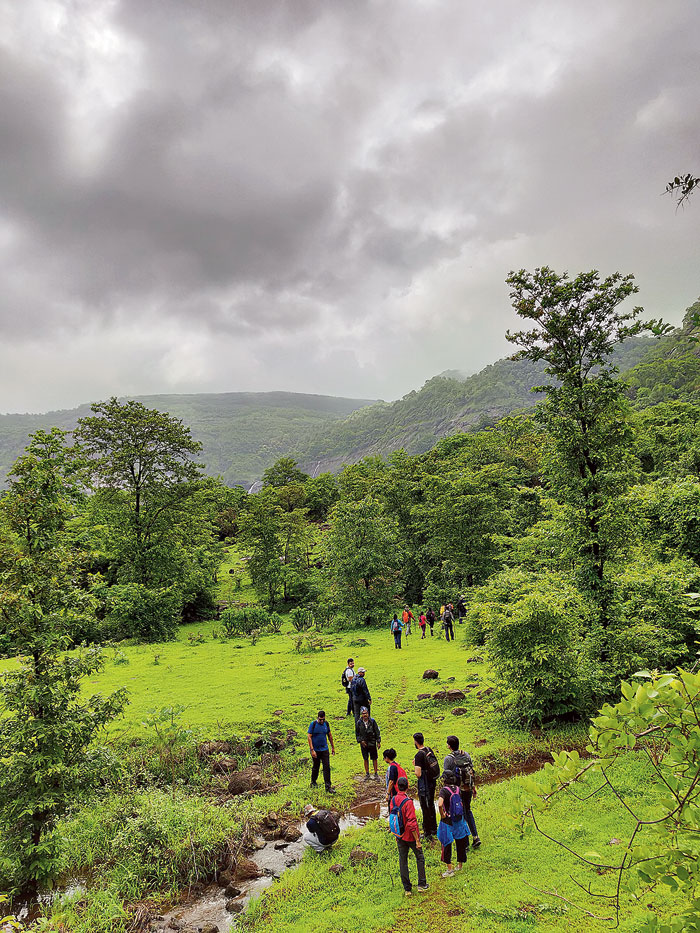 After a hard day’s trek, the group jumped into this stream to cool down.
Sourced by the author

We crossed lush meadows and fast-flowing streams and kept climbing till we reached a plateau after a couple of hours. We took some rest under the trees that were in full bloom during the monsoons. All of us even made sure to plant some seeds in the damp soil, hoping that they will grow into beautiful trees one day. 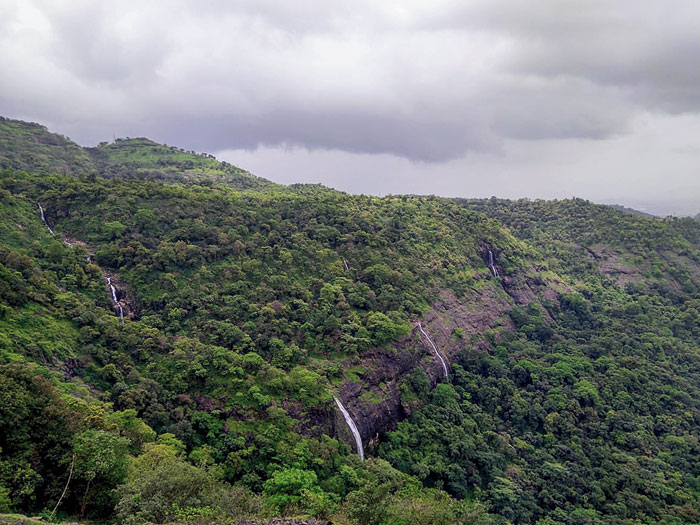 The breathtaking panoramic view after reaching the plateau below Duke’s Nose — the mighty Sahayadris in all its glory!
Sourced by the author

Intermittent rains continued as the trail took us through the jungles of the Sahyadris. We had to cross a stream on the way. We got into the water to wash and cool ourselves down. The cold water refreshed us. It was past noon when we finally reached the plateau below Duke’s Nose near Lonavala, where we broke for lunch.

Our packed lunch boxes had a whole array of items starting from sandwiches to energy bars. The view from the top was absolutely breathtaking and cannot be expressed in mere words.

The trek to Umberkhind through the Sahyadris is a one-day affair. The cloudy skies, drizzles, streams gushing from the mountains, breathtaking greenery all around is a perfect way to spend an otherwise lazy Sunday.

After clicking some group pictures, finishing lunch and enjoying the panoramic view of the mighty Sahyadris, we finally started our descent. It was steep and we had to walk down slowly, all the while making sure that the person behind us and ahead of us were fine too. 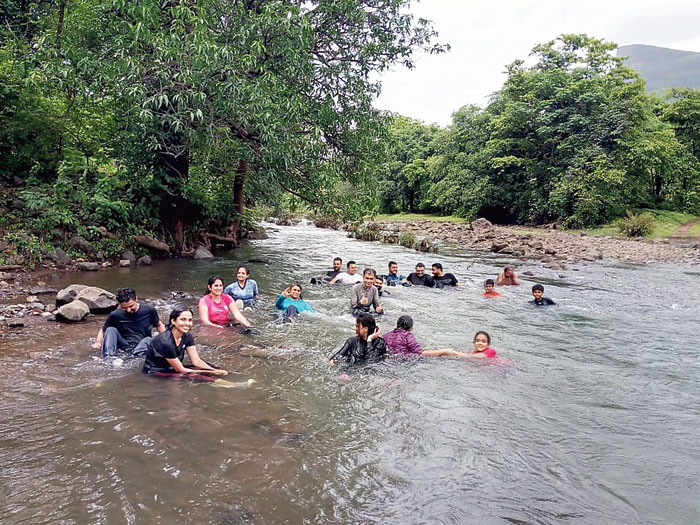 After a hard day’s trek, the group jumped into this stream to cool down.
Sourced by the author

When we finally reached a big stream, the whole group jumped right in! We let the cool water relax our bodies and minds. We finally reached the villages with lush green surroundings and found our bus waiting for us.

The base village of Chavani is about 61km from Mumbai and it takes about two hours to get there. This trek makes for a great weekend hiking experience for beginners or mid-level trekkers. So if you’re visiting Mumbai and are in the mood to do something else apart from the usual ‘Netflix and chill’ one of these weekends, tag along with Countryside Adventure Holidays for some outdoor activity. 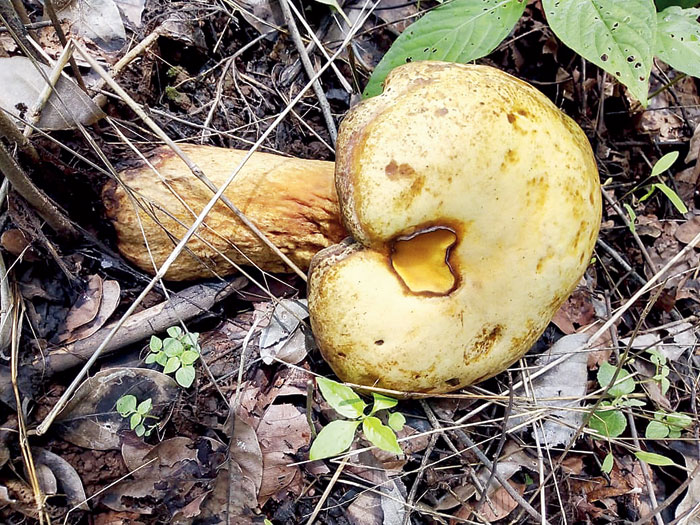 We found a giant mushroom in the jungle trail!
Sourced by the author

They have more weekend trekking plans coming up this monsoon. They also organise tailored experiential, adventure and offbeat holidays to places ranging from Himachal Pradesh, Nepal and Bhutan to Mongolia, Iceland, South Africa. And just recently they have added South America and Antarctica to the mix.