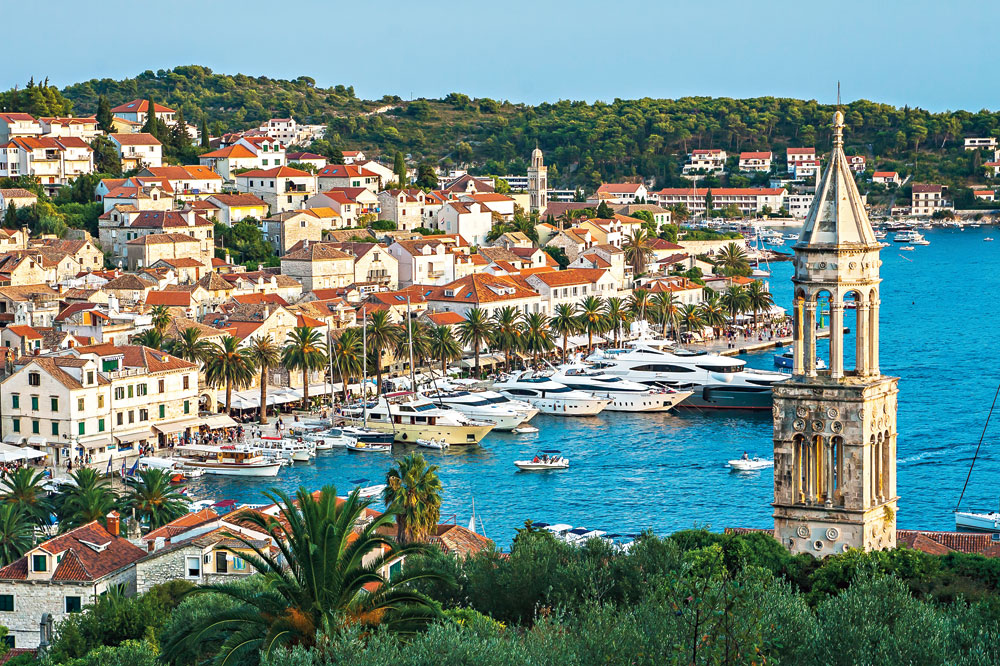 Emma Thomson is an undergraduate student of the University of Glasgow, who has interned with t2

As we had a few days in Croatia, we were able to do several day trips and, after hearing murmurs that the island of Hvar was the place to be, we wondered what we were missing out on? Soon we decided to head over to the island, which has been likened to St. Tropez, Mykonos and Ibiza, to see what all the fuss was about and we certainly were not disappointed!

Situated in the Adriatic Sea off the Dalmatian coast and just a two-hour ferry ride from Split, Hvar is the perfect break from city life. With sleek marble streets, picturesque crystal-clear waters, palm trees, and grand yachts at the harbour, the sun-soaked town centre looks like something straight out of a postcard, and the ornamented Gothic architecture of the cathedral and St Stephen’s Square, dating back to the 13th-century, really cements the historical aspect of the town.

We soon realised that Hvar is not only beautiful but also has so much more to offer. With many bars, restaurants, and interesting shops run by the locals, there is something new to uncover up each stony path and the laid-back vibe of the town makes it easy to settle in. After taking in our surroundings we strolled along to Red Baron, a bar on the marina-side strip that allows you to sip on refreshing cocktails in a relaxed outdoor-lounge setting. What’s more, the open-sided awning allows clear views of the sun as it set into the glistening waters where fancy yachts lingered by the dock. Next we headed back towards Trg Sveti, the town square of Hvar, where we indulged in nibbles and Prosecco at Pjaca, a classy restaurant and bar that spills out on to the courtyard.

Afterwards we wandered along the seafront to explore the main action of the island: the party scene. There are several busy spots in the centre that we had heard were worth checking out, so we decided to hit them first. Aloha Bar proved a fun spot to get into the party mood as they served cocktails in pitchers filled with sparklers and copious quantities of straws and had a small dance floor area where we could enjoy the popular music. We then progressed to Kiva Bar, a raucous club that was filled to the rafters with people — clearly a popular spot for locals and tourists, with an international mix of clubbers — the party continues out onto their alleyway where the music blasts.

We had been told by fellow travellers that despite the lively atmosphere of Hvar’s town centre, the biggest clubbing place was actually a 10-minute boat ride away across Stipanska Bay. On Marinkovac Island is the mysterious Carpe Diem Beach Club. Featuring funky visuals displayed across large screens, rose-tinted lighting, and a dance-floor under the trees, the club is reminiscent of a psychedelic forest, yet the tasteful furnishing, lounging and pool areas add to the laid-back beach club flair of the place.

With dancers and performers up on the main stage area, bubbles, and a good crowd, Carpe Diem perfectly manages to capture a carnivalesque feel that entices you. Plus the club hosts big name DJs each night. So, if you are a fan of techno, house, or electronic music, Carpe Diem is definitely the place for you — and just one of many reasons to visit the idyllic island of Hvar!

For many British students, spending the summer travelling around Europe has become a sort of rite of passage. It was the same for me. Starting from Marseille, we went all around Europe, eventually finishing the trip in Amsterdam. Somewhere early on, we arrived at Hvar in Croatia.

Of the many beautiful and interesting sights we saw, one of my favourites was in Split, one of Croatia’s most popular destinations due to its beaches and the fortress-like complex at its centre.

We arrived at Split’s railway station, Zeljeznicki Kolodvor Split, around 7am on a summer Monday, planning to stay in the city for the next four days. As the station is by the bus terminal and ferry port, we immediately set off on our first day trip to Krka National Park as it was just a short bus ride away.

The coach took us directly to the small town of Skradin, where we bought tickets for the park; the entry fee also includes a boat transfer over to the park, which allowed us to get their easily and quickly. Once we had arrived, we were free to explore the place and admire the series of seven amazing waterfalls.

The most captivating part of our time there was swimming by Skradinski Buk, a clear turquoise, natural stretch of water with high waterfalls at one side and cascades at the other. It was the perfect location to relax in the sun, soak in the soothing waters, and capture the beautiful views — the waterfalls of Krka are a must-see if you choose to visit Split! 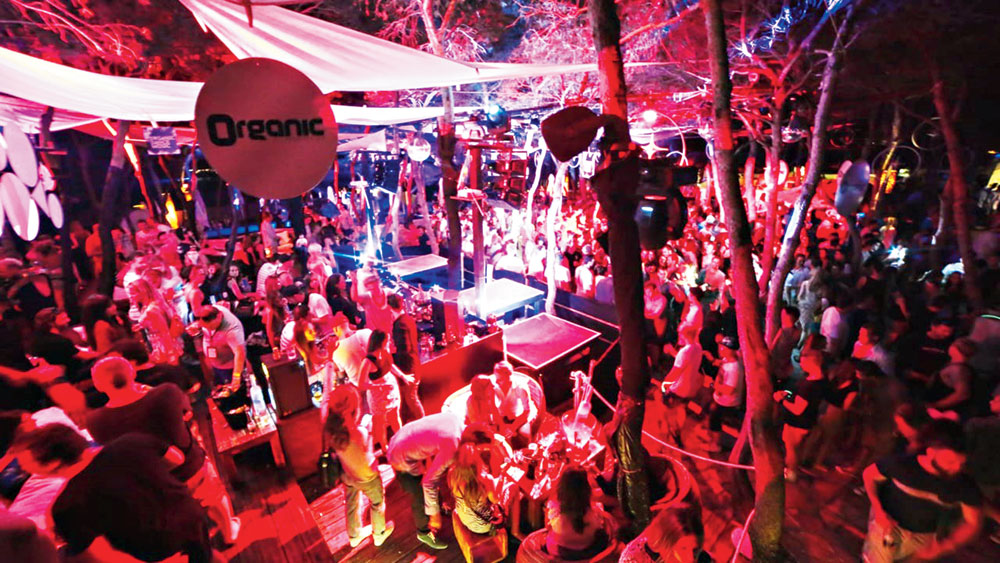 The Carpe Diem Beach Club on Marinkovic Island, a 10-minute boat ride away from Hvar is high on party action
Sourced by the Telegraph 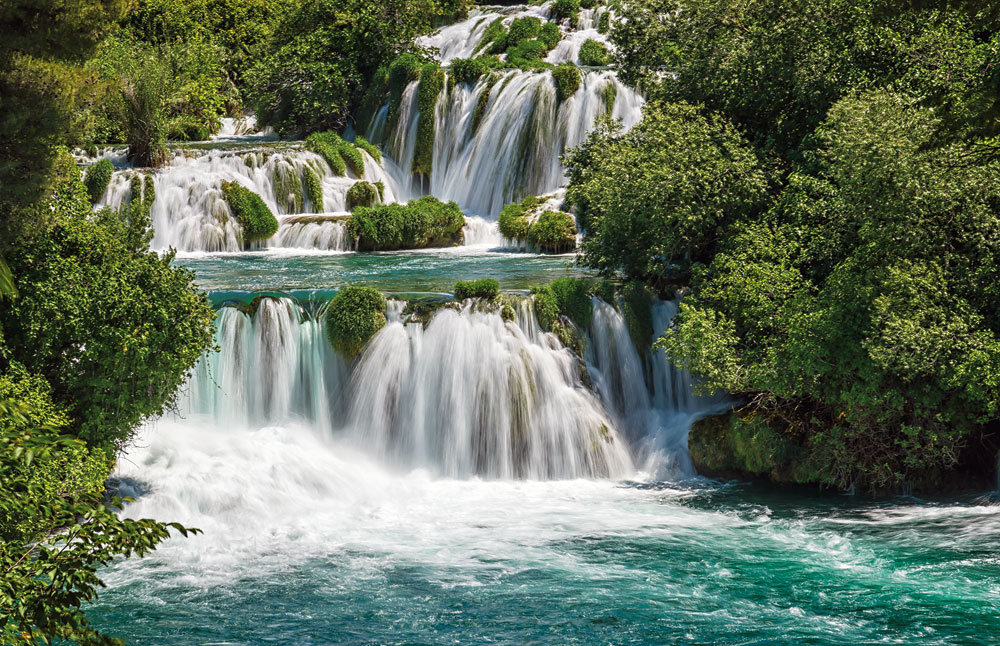 The spectacular series of waterfalls is one of the main draws at the Krka National Park, a short distance from Split in Croatia
Sourced by the Telegraph

If the all night parties of Hvar’s town centre don’t sound like your scene, or you simply need a night away from it, then Stari Grad (or “Old Town”) on Hvar’s north coast offers an equally pleasurable but quieter ambience, proving that the island truly has something for everyone. Outside the town, the Stari Grad plains are supposed to be some of the longest-cultivated agricultural lands in the world. Taking a stroll through the fields, one can sense that the place has an archaic and quaint look that should interest those with an eye for photography.

A major attraction of Hvar — which we unfortunately didn’t get a chance to explore — are the hidden beaches and deserted lagoons of the Pakleni Islands. Said to be one of the most beautiful parts of the Hvar Riviera and located to the southwest of the town, the chain of islands presents itself as the perfect romantic getaway for couples, or equally, as a fun-filled excursion for friends or family as it offers numerous bathing spots, secluded bays and incredibly turquoise waters.

So, if you are thinking where next to go on your summer break, look no further than the limitlessly beautiful country of Croatia.