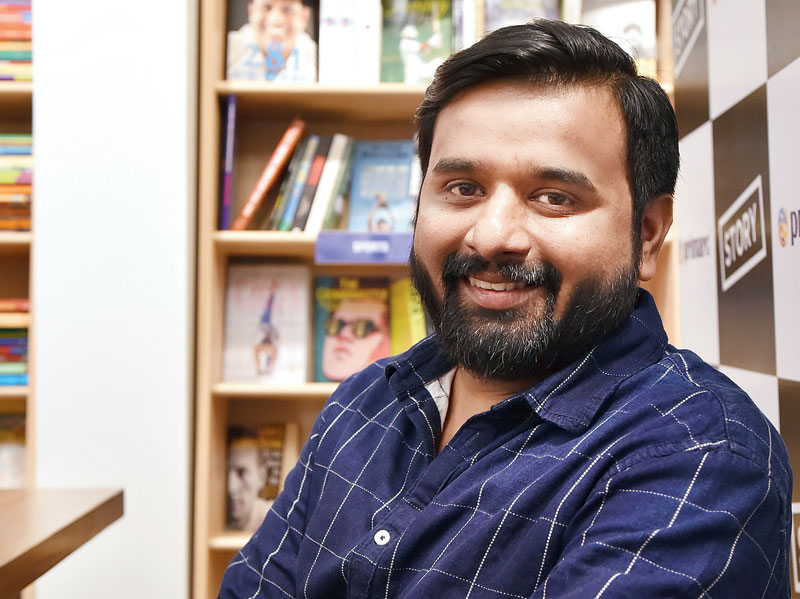 A teenager walks up to Sudeep Nagarkar with a big smile and a pile of his books stacked in her arms all the way up to her head, almost obstructing her view. Her smile deepens as her favourite author signs every book for her, one by one. An elderly couple jostle through the horde of youngsters lining up to get to him, every one of them eager to get their copies signed. And that’s perhaps just a glimpse of the sweep of his popularity.

From doling out life lessons and relationship advice while explaining one-liners from his books, to reminiscing on his journey as a writer, and confidently claiming how everyone would probably feel a “déjà vu while reading through many instances” in his books, Sudeep Nagarkar was both the heart and soul of the launch of his latest book Stand by Me at Story on Elgin Road. The “emotion-charged thrilling love story” by one of the bestselling authors of young adult fiction in India marks his drift into the thriller genre.

“You can’t know the formula for writing a bestselling book. When I got my first book published in 2011, social media was not so strong. From 2008 to 2011, I read every book from the point of view of how I am supposed to write, grasping the technical aspects. You should enjoy the process of writing, write a good story and you have to be very focused throughout,” came his matter-of-fact advice to budding writers. The free-flowing session saw him respond to questions from the young audience, while also sharing insights about his latest book and his love for reading. “I used to read a lot from childhood. I started reading with Goosebumps and went on to Hardy Boys, Archie comics. From my school days, I read a lot. So, it’s quite difficult to name one book which inspired me, as somewhere, every book has inspired me. My favourite author currently would be Jhumpa Lahiri.” he said. 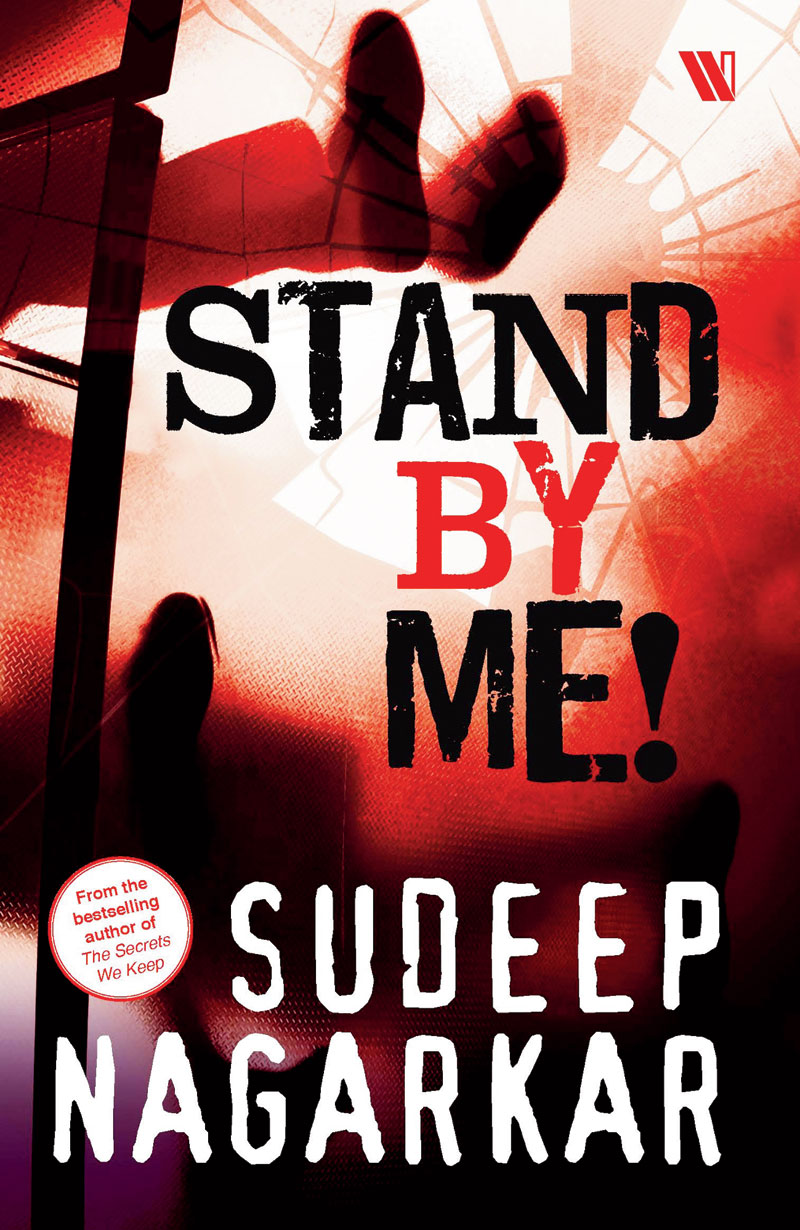 The Telegraph caught up with him for a short chat after the session.

For the character Mihir in your upcoming book Stand by Me, ‘fiction always felt real and non-fiction seemed far from realistic’. What does Sudeep Nagarkar have to say to this?

I believe that nothing is fiction, to be very frank. Everything is inspired from real life, and what happens if you go too far or too much into the fictional world is that somewhere reality seems unrealistic. See, probably when you were a kid, you were brought up reading Cinderella stories, which never happen in reality, but then you start expecting those things in reality and that’s where the problem lies.You shouldn’t be so realistic that makes you lose the charm of living itself, but then you need to have that kind of balance and that’s what I personally feel after writing so many books.

How would you describe Stand by Me set against your previous works? Will you take us briefly through the larger social issues brought up through the mesh of stories of friendship and love in your books?

It’s very different, not just because it’s releasing now. All my previous books are love stories but this one is a thriller. It’s different and that fascinates me — writing or even reading thrillers for that matter. This book talks about the conflict between the soul and mind and that moment when you are not sure whether you should think through your mind or through your heart. The character called Kartik is in this zone where he’s stuck in this constant conflict and the story is about how things unfold before him and how his journey has him cross all limits for his dead sister, to prove that it was a murder and not a suicide.

All my books have somewhere been based on real-life incidents and reflect the current scenario of the society also. In some books, you'll find friendship at the centre, and some of them have love at the centre, but at the same time, they are put in the backdrop of social issues.

What is your take on gender stereotypes and how do your books portray them?

Through the female characters in my books, I have tried to portray women as real persons and not picture-perfect projections of them. For example, I had highlighted the popular use of Instagram filter in one of my books, the fact that we are so obsessed with being perfect. To look good, to be fit is fine. You have to be presentable but that doesn’t mean that you have to look perfect and that is something that I have always highlighted through my books.

How do you perceive the difference between popular fiction and literary fiction?

I think popular fiction acts like dessert for the readers. I have seen so many of my readers who started reading with popular fiction, gradually developed the habit of reading and then started moving towards literary fiction. Nowadays, with digital entertainment in the forms of Amazon Prime, Netflix and all, it has become very difficult to keep readers hooked to reading in the very first place. Popular fiction connects the readers instantly with the stories. And, because my stories are based in India, on things happening around, with the books being categorised as popular fiction, it has actually held the growing readership since the past decade. If popular fiction wouldn’t have been there, then we wouldn’t have sold.

I’m not taking away any credit from literary fiction for that matter. But there were times when selling 5,000 copies or 10,000 copies was a big thing. But now you see, for popular fiction, the first print run itself is 50,000 copies. Calcutta, obviously, is one of the prime cities. I think that popular fiction and literary fiction are equally important. Literary fiction teaches you many things. People read my books not for the vocabulary, but probably for a good story and the relatable characters. In literary fiction you have to have that complete mix of things where you have to reach to a level which will not only connect with the readers but also have something new for them, be it vocabulary, or an idea that can be researched on. But then, if you ask someone who is not into reading to read a book of literary fiction, he’s not going to pick it. So, in that context, popular books help in the initiation into reading books at the very outset.

What do you think is the USP of Sudeep Nagarkar’s books?

I don’t know, because if I had, I would’ve written all the bestsellers. But, over all these years, I have talked to the readers and they have always told me that ‘your stories connect well.’ And, somewhere they feel that they have lived and seen those characters around them because even though the language and emotions are very simple, you’ll see that the kind of incidents that I portray connect with the readers.

How do you look at the marketability of your books?

It is important to market the book, reach out to the audience. There’s social media for it. At the time when I was not connected to the people, I had released a song with a book. There were also many videos that I released on social media platforms so that people relate to these books. There were snippets that were being released. Then, book launches and media interviews happened. That’s about it. I personally feel that these days, and from the time that I started writing, a lot of things depend on word of mouth. Book reviews don’t help much.

There is something about romance that has appealed to the Indian youth over the years, more than any other genre. What do you think it might be?

We Indians are born romantic for that matter (laughs). We’ve lived in the kind of society where we’ve seen our parents loving each other, we’ve seen people around us caring for each other. It’s not like in the West where everything is so casual that people hardly care about relationships. If you see in Hollywood, changing partners is common, but not in India. I think these are the values that our country holds and we like to read about such relationships and emotions because we have them in us. Even Indian mythology has love stories embedded in it. I don’t think that the human society can sustain without emotions and roots. If you take these away, the world will be destroyed. As is said, it is love, indeed that makes the world go round.

How would you sum up your writing process?

It’s a little different from the other writers that I have known personally. I’ve seen them writing the first draft, then again thinking over it and then writing the second one, then the third one. But I personally prefer to write only one draft. I’m someone who pre-decides what will be the flow of the story, what will be the character graph and when I’m very sure that this is what I want to portray, only then I go ahead and start writing. And when I start writing, I do it in one go in two-three months. Then when the actual editing happens from the publisher, things get a little tricky.

Do you intend to foray into other genres as well?

I don’t know. I have gradually shifted from pure love stories in my initial years towards relationships and friendships. Then I’ve started highlighting social issues in my books and now this one is a thriller. So it totally depends. At the end of the day you need to have a good story and if it’s coming out of a love story or a thriller, it’s completely fine.

What are you writing next?

I haven’t thought about it as such. I’m just going on with the book tour. If something strikes me, I’ll just go ahead and start writing about it.