In his centenary year, a glance at the timeless appeal of the looks Satyajit Ray designed for his actors 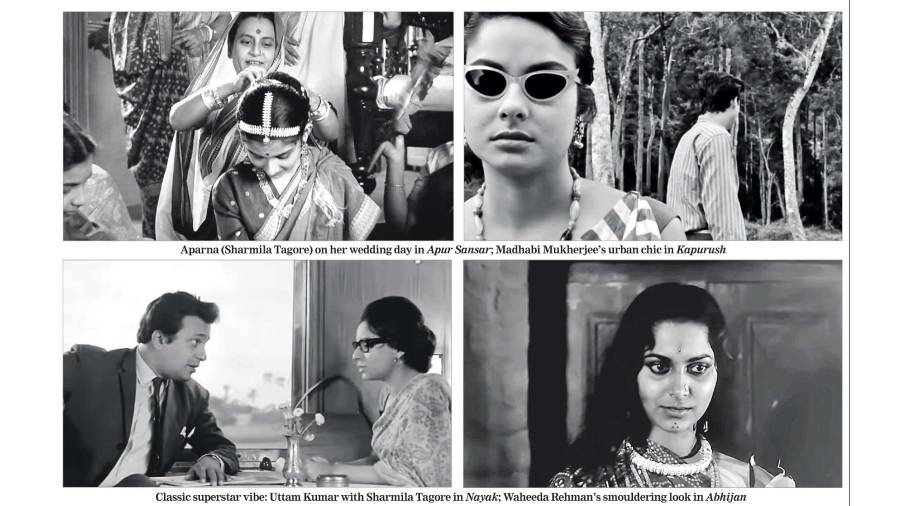 She is a bored and lonely wife with a yen for writing. She is a college-educated, strong-willed wife with a past. Madhabi Mukherjee in Charulata and Kapurush, back-to-back films in the 1960s, plays very different women in different time zones. And in both, director Satyajit Ray gives her very different looks. But women can borrow style elements from both the Madhabis, be it her aatpoure sari drape in Charulata or her casual urban chic with a sleeveless blouse and a sari with geometric prints, complete with a beaded neckpiece and shades in Kapurush.

In Ray’s centenary year, his fans say that how he dressed and accessorised his characters don’t seem dated. And many want to flaunt those looks that they recount with precise detail — Madhabi’s puff-sleeved blouses with ruffles and a Chinese collar in Charulata, Sharmila Tagore’s man watch and paisley-print silk saris in Seemabaddha, Simi Garewal’s chunky jewellery in Aranyer Din Ratri, Soumitra Chatterjee’s woven shawls in the Feluda movies, Dhritiman Chatterjee’s ethno-grunge look in Pratidwandi.

Fashion designer Abhishek Dutta says that as a child, when he watched Ray films like Goopy Gyne Bagha Byne, Hirak Rajar Deshe and Sonar Kella, the “very distinct clothes” worn by the characters fascinated him. But it was Uttam Kumar’s “classic superstar vibe” in Nayak that he was most inspired by. When Dutta was asked to design the clothes for Srijit Mukherjee’s Autograph (2010), a tribute to Nayak, he realised anew the visual power of the film, including the clothes. “Uttam Kumar’s sharply cut suit, his tie and pocket square, the glares he wears to hide the insecurity of the character, they’re timeless and can be replicated by any well-dressed man today,” he says.

What about the women? Dutta waxes eloquent about Sharmila’s look in Devi. “It was a black-and-white film but the jewellery, sari borders and use of hibiscus flowers stood out,” he says. “Also, her soft-smoky eye make-up can be copied by girls. It is luminous.”

Danseuse and choreographer Sharmila Biswas, who is the director of Odissi Vision and Movement, finds Ray’s styling “a perfect fit” for every character. A Ray buff, she finds it hard to choose one look as her favourite. “But I must confess to loving the jewellery Simi wore in Aranyer Din Ratri. And Alaknanda Ray’s sari and trench coat in Kanchenjunga is a look I can happily sport in winters in any corner of the globe. It is timeless chic.”

A young Instagrammer who confesses to not having watched too many Ray films says she is floored by Waheeda Rehman’s jewellery in Abhijan and that of Shabana Azmi and Farida Jalal in Shatranj Ke Khiladi. “Waheeda’s character wears a thick silver hasuli necklace, which is to die for,” she smiles. “Ditto for the earrings and passas (headpieces) worn by Shabana and Farida. You just need one statement piece.”

Agrees Biswas. “The best part about Ray’s styling is that he never drowns the character in the look. Rather, the clothes and accessories bring out the personality.”

Ray was an impeccable fashion designer, feels Dutta. “He would sketch every look in his storyboard. That’s uniting detail with the big picture. That’s genius.”