Regal and heritage-rich, yet with understated glitter and muted sheen, the Spain-inspired collection was carefully indulgent 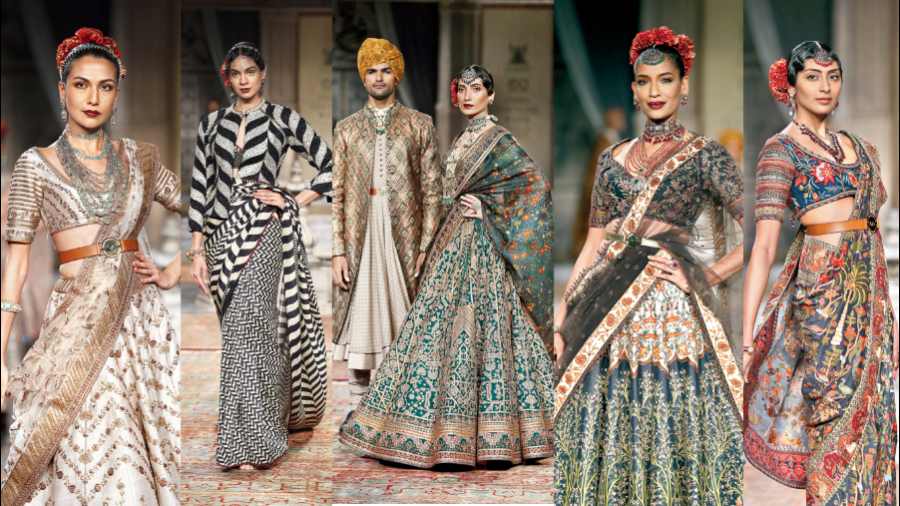 JJ Valaya’s celebration of his three decades in fashion at FDCI India Couture Week on Sunday at the JW Marriott in Aerocity in Delhi was like a well-cooked and balanced meal. Beautiful clothes. Lovely set-up. Soothing music. Top-notch styling. And just like a delicious meal that lingers on your palate memory with its play of taste and smell intertwined with your senses, the milestone moment of the veteran designer’s career was rendered its rightful depth by the presence of his peers in the audience who cheered and clapped for him. From Rina Dhaka to Suneet Varma... the real icing on the cake.

Emotions, nostalgia and that personal touch were the memories to savour. The remnants of the masala you lick off your fingers after a good meal. Be it veteran choreographer Vidyun Singh introducing the show, with a trip down the making-of-JJ Valaya memory lane or his fellow designers rising to give him a standing ovation. Valaya looked up and sent out prayers at the end of the show. Knowing him, it had to be gratitude.

His Alma, meaning ‘soul’ in Spanish, played out on a set that was inspired by the “architecture of Italy and Spain”. “All the Italian frescos on the back wall were inspired by Giorgio Vasari who designed the walls and ceiling of Vecchio Palazzo. The arches were inspired by the architecture of Alhambra, Spain, with ruined rustic aesthetics. The cobblestone ramp with a ruined fountain in the middle gave it an old courtyard feel. The colours were very muted, mix of beige and grey just so the vibrant couture can stand out more. The centre pillars were designed keeping in mind the signature chevron pattern of JJ Valaya,” said Prerana Agarwal Saxena, founder and CEO at Theme Weavers Designs, the set designers.

The charming music for the show was orchestrated and directed Delhi boy Sahil Vasudeva, a pianist and composer. “The Spanish influence was prominent in the performance because the music that I rearranged and orchestrated is by one of Spain’s greatest composers, Isaac Albéniz. The idea was to fuse two ancient and historical musical traditions, which is Western classical and Indian classical. The last song we played was my original composition. The interesting part is it had a lot of folk, which is why it had a global appeal,” Sahil said post-show. While Sahil was on the piano, Suhel Khan was on sitar, Shahanawaz Khan on sarangi, Makrand Sanon on hybrid percussion and Sina Fakhroddin on darbuka.

The jugalbandi of sensibilities translated to the clothes where “the costumes of the Matadors (Matador de Toros), the motifs on the Manton shawl (Manton de Manila) and the patterns of the Hand Fan (Pericon)” played out on primarily Indian silhouettes but with a global heart. Exotic yet enticingly simple.

Pastels, prints, navies, a series of classic blacks and the bridal staple red played out across saris, lehngas and traditional menswear. Regal and heritage-rich, yet with understated glitter and muted sheen, the Spain-inspired collection was carefully indulgent. The Valaya signature chevron pattern was exquisitely married in surface textures and print. In fact, just like the bird and belts, almost leitmotifs in the showing, the marriage of embroidery and prints too played out to stunning perfection.

Hoorvi J. Valaya’s styling was the hero, capturing the spirit of the brand and revisiting it through the lens of 2022. The zing was refreshing. Adding to the romantic drama were the glittery eyes, the flowers in the hair and those gorgeous shimmery red and wine lips. So hot! There were designs by Jagdish Jewellers.

A fountain, right in the middle of ramp, seemed almost metaphorical of JJ Valaya’s unceasing imagination. Or, you could also liken it to the ‘fountain of youth’. A sensibility so timeless that it’s almost ageless, yet deeply rooted in the now. Much like the designer’s ‘seize the day’ motto in life. As Valaya soaked in the accolades and adulation, FDCI chairman Sunil Sethi who has known the designer for years, walked up to him. “JJ, you are back”. And, how.