Harry Styles won hearts at the Brit Awards 2021 with a handbag he carried. Listing a few more celebrities who have gone the gender-bender way with their style 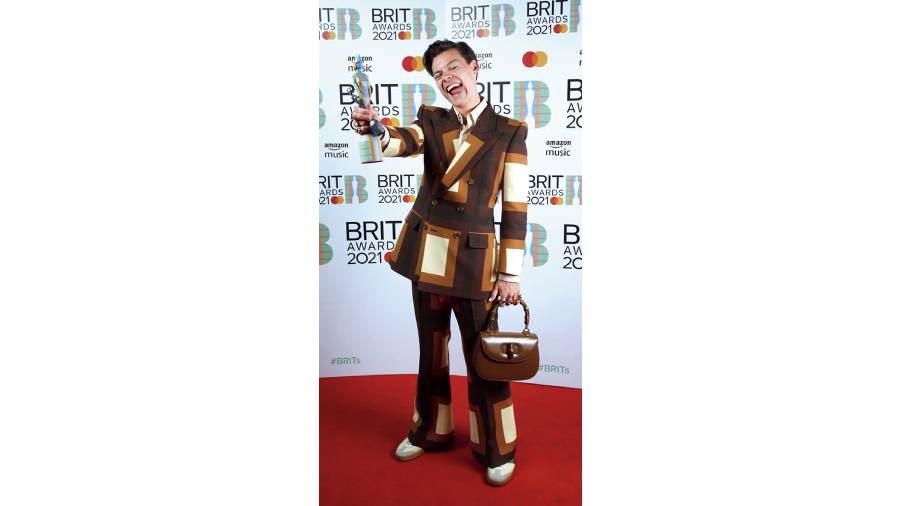 When you think of Harry Styles, you think of gender-fluid fashion. Who can forget his Met Gala 2019 attire in a sheer and tulle outfit from Gucci or the lace-trimmed Gucci dress for a Vogue shoot? The former One Direction member has never restricted his wardrobe to men’s clothing. Recently at Brit Awards 2021, the Watermelon Sugar singer turned up in a retro suit that he accessoried with a handbag with a bamboo top handle that you would probably expect a woman to carry. We are completely in awe of how effortlessly he pulled off gender-fluid fashion like always. Taking a cue from his latest look, we look back and pick some other celebs who have gone the gender-bender way with fashion.

f there is anyone who did the gender bend with outfits in Bollywood, it is Ranveer Singh. Known for his OTT and whacky sense of style, Ranveer has been seen wearing Anarkalis to skirts. This particular look in polka-dotted shirt and matchy visor cap by Sabyasachi, with those striped pants teamed with blush pink shoes and geometrical shades, remains one of our fave looks of his

Another star who has wowed and turned heads on the red carpet is Billy Porter. The Pose star has been donning gender-fluid outfits, not once but on several occasions. We absolutely loved this two-toned outfit from Hogan McLaughlin that he wore during Critics Choice Awards. He rounded off his look with silver armour jewellery on his arm and neck. And oh, that pose!

Fluid fashion has found favour with Bolly beauties like Sonam Kapoor Ahuja and Anushka Sharma. If Anushka worked her inner boss babe attitude in a striped suit in blue teamed with a black tie, Sonam looked ravishing in an easy suit with a scarf and turtle-neck top.

Fashion forward and confident sums up Zendaya. The actress looked jaw-dropping in this grey silhouette that blended masculine with feminine elements seemlessly. We love the strong bolero jacket and sturdy belt, accessorised with dainty earrings and a chain around her neck.

From Bella who was most comfortable in denims and oversized tee to being a style icon — Kristen Stewart is a charmer who has been bending not one but many fashion rules, right from taking her heels off on the red carpet at Cannes and walking barefoot to showing her love for gender-fluid fashion. If hairstyles had a gender-fluid category, she would definitely top that list too!

When you are invited to attended The Royal Wedding (Princess Eugenie and Jack Brooksbank), one would often think of wearing the prettiest of shade, feminine dress and accessories... unless you are Cara Delevingne. The supermodel-actor stood out from the crowd in an Emporio Armani suit, chic Chanel hat and black stilettos. With that body and grace, she totally owned the look!