Advertisement
Home / Culture / People / When it comes to Petunias, only fools rush in

When it comes to Petunias, only fools rush in 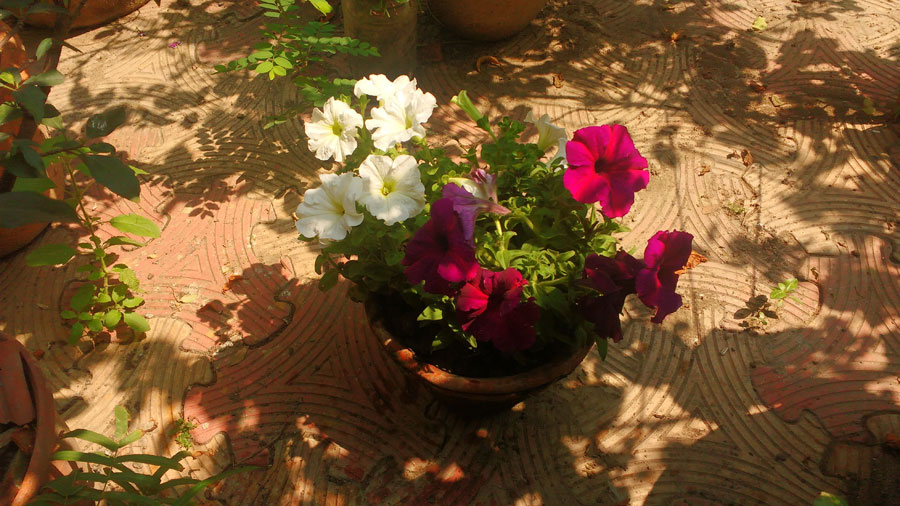 And the flowers too played along in the general scheme of ostentation, grinning in their papery gowns of mauve, magenta and maroon, often streaked through the middle or rimmed in white. The bulbous orange and yellow Tagetes — known as marigold to all — made themselves discernible from miles away. And December wasn’t anywhere close.

What most wouldn’t know or care about is that these plants were ill-gotten; picked up from sellers who pumped little lives with hormone boosters and cruel chemicals. Hundreds of such petunias had to be readied and displayed by the wayside, for unsuspecting people to take home. Quite an amicable arrangement — buy, hang, gloat. Although sometimes you did have to transfer them to bigger pots. Theirs is a sad lot, these herbs laden with brilliance that dot the winter scene. Even before they spread their leaves in a decisively healthy manner, they sprout the trophies. Tiny beings burdened with the cycle of consumption and production, and the street hardly understands.

Where then is the need to go about it the old fashioned way, when planting petunias meant so much more than planting petunias? Or the time or temperament for an organic antidote to the pestilence that surrounds us? That kind of thing requires a lot of things. But what you need first is acumen. So you know when is the right time to do things, and do them too.

In my opinion, the best time to start thinking about petunias — strictly at the level of conjecture — is after the Puja racket has died down. I’d been fancying mine from months before though. The different shades that would spring, the loved ones I might gift a blossoming bunch to, the best colour combination in a single container, whether there’d be enough sunlight in my slice of space. How the neighbours might view them, the crabby ones, the churlish ones. Would the friendly ones admire them or be filled with unhealthy competition?

Anyway, after you’ve allowed these notions to swim around for a while, you do a careful selection of pots. This is of utmost importance if you want to make your babies feel at home. Then you go about preparing the soil, which might take anything from a day or two to many days. And all this while, you scout the nurseries to see if the saplings have started to appear.

When they do, you wait a few days for the prices to come down. Wisdom in matters of the heart is in not rushing into things. Sooner than later, the day arrives when you have to get the seedlings. You present yourself at the shop, try to establish a meaningful conversation with the man there — although why there are no women doing this job beats me — and extract from him the assurance that each sapling will unfold in a different colour.

That precise moment when you dig your fingers into the soft earth, along with the delicate roots, is sublime. That is to be followed by weeks of waiting and watching, and hovering around doing little things. Cold foggy mornings remarkably give way to warm stirrings should the slightest growth become noticeable. I’ve long felt that petunias have a way with trichomes, the fine hair that covers tender shoots. They seize your attention in a way you begin to actually see what might erupt in a few days’ time. And watch I did. And wait.

The neighbours in the meantime had a rollicking time with their petunias, which bloomed, received all manners of gaze and made their owners very proud. I shall gift you some, my friend said to me when I cribbed that my plants were yet to gain a respectable form. You don’t receive much sunlight there, she comforted. Little did she know what I’d imagined — that the warmth of my nurture would suffice.

There’s always a next time, they say. And I tell myself, if spring is here, can winter be far behind?

Puppetry: A king and a queen with strings attached

A certain unease hangs in the air. A sense of loss, a low-lying agitation that keeps marking its attendance every once in a while. As if it’s been sown deep inside that a cherished task remains unfinished, did not reach completion the way it was expected to.

Winter has not been too unkind to this summery city. Perhaps miffed at being termed notoriously mild, it did bring on a semblance of cold this time around. However, much before we got a hint of what was coming, numerous balconies and porches hung out their petunias and pansies — the marigolds stood firmly on the ground — as if in proclamation that the season had arrived, that the season was them, these things of flamboyance.