The Shah of Cha

Meet the inimitable chaiwallah who flavours his servings with khaatir aplenty 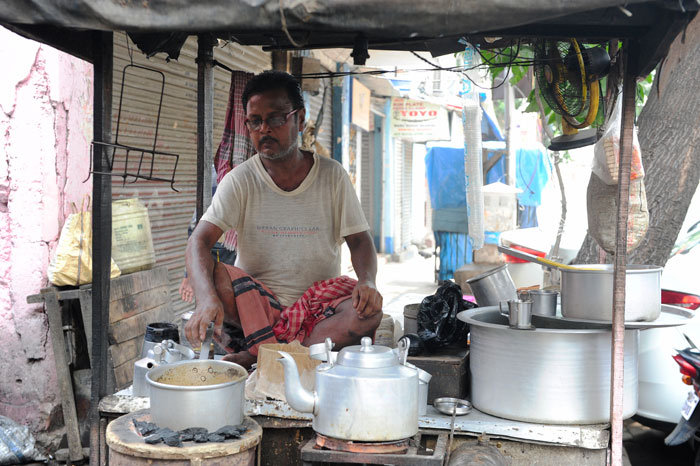 When I ask Mahadeb if he feels entertained, even as serialised conversations pour into his ears day after day, the 56-year-old tells me as he squeezes the cloth full of used tea leaves with a pincer, “If one has ears, things will get in. Good things and bad things.”
Subhendu Chaki
Upala Sen   |     |   Published 26.10.19, 07:22 PM

In and around central Calcutta’s Sooterkin Street there are, as they say, anginat tea stalls. Each has its own crop of regulars, but it is safe to say that only Mahadeb’s has a reputation.

Of course, you could say that Mahadeb’s stall is distinctive in that it is one of those few places where the chaiwallah is literally on top of his trade. Not many can claim to have seen him with his feet on the ground. He is for- ever perched on a little wooden stool atop his aluminium-and-wood kiosk, measuring out countless shades of brown — all day long, five days a week.

Not many can claim to know Mahadeb’s thoughts and views on life either, whether he suffers from the gout or high blood pressure. In fact, not many know his second name even (Das), forget his life’s story, for the good man keeps it strictly to the tea.

The clamour around his kiosk is unbelievable. To begin with, it is a busy busy street and there is the cacophony of traffic. Then there are regulars shouting out orders to him, calling out to mates across the street, calculating dues — “cooome onnn, bro,” I heard one hustle. All this punctuated with the slooosh-slooosh of tea from pan to mug and from mug to bhaanrs, big and small, regular plastic cups and other thimble-like things. Sometimes, one of those youthful office boys with a spring in his step and mohawk will thrust a red flask and sing out cheekily, “Har Har Mahadeb.”

Sometimes, you will see painfully thin couples sitting on the wooden bench adjoining the kiosk in companionable silence, sharing a headphone and sipping milky tea. Sometimes, chatty ladies will appear from nowhere and order imperiously “One coffee and one cha”, start to discuss a husband’s take-home pay or the one-year-old’s dietary habits, throw in a practised “Mahadebda, taratari… hurry”, and resume talk of pay and puke. Sometimes a brooding gent with a smoker’s lips and downcast eyes will appear, nod and get his customised drink — ekta liquor, etc.

When I ask Mahadeb if he feels entertained, even as serialised conversations pour into his ears day after day, the 56-year-old tells me as he squeezes the cloth full of used tea leaves with a pincer, “If one has ears, things will get in. Good things and bad things.” He raises a finger to his lips and says, “My motto is — listen if you have to, but don’t say anything. Bolle bipod… talking is inviting trouble.”

Mahadeb knows exactly where to locate his story. He starts, “In 1978, the bishaal boro bonya… the great big floods wiped out my village in Midnapore. That year I came away to Calcutta.” He speaks Bengali and an assimilation of English words with a Midnapori accent. I have reproduced his phraseology verbatim in places with his distinctive pronunciation; only because I think, much like the smashed, ragged ginger he tosses into his pan, they help convey the flavour of his persona.

He continues as he wipes clean the aluminium counter with hot water, “One chap from our village had a tea stall on Peencep Steet (Princep Street) and he asked me to help him out for a month. I worked for three months, serving tea all day to the shops selling motor parts. He paid me Rs 180 in all, plus daily tippin (tiffin) worth two bucks. Those days a farm labourer in our village would be paid Rs 6 after slaving the whole day. When I returned to the village, I did not feel like working as a farmhand anymore. Amar lojja bodh holo... I felt ashamed.”

Mahadeb returned to Calcutta. This time, his friend from Princep Street offered him a position at his stall for Rs 80 a month. He had worked for a few days when another chaiwallah poached him. He told Mahadeb, “Where you work, that is a partnership business. O laabley-e boshbe, e laabley-o boshbe...they take turns to make tea, and you are left washing the utensils. Come join me, I will teach you how to make tea and I will pay you Rs 150 a month.”

Mahadeb lists out the challenges of the old new job while reaching out for a handful of CTC tea from a Fevicol dispenser. He says, “The stall owner would want to know how many cups of tea a day, how many cups for every litre of milk. One also had to maintain all the regular customers, and then the hishaab… bookkeeping had to be perfect…”

A man is having a cup of coffee at Mahadeb’s; he keeps looking at his mobile from time to time. A second cup of coffee is waiting next to Mahadeb’s perch. A young woman, slightly out of breath arrives, and in between a steady stream of chatter picks up the bhaanr and empties it in a jiffy. In between the interview, Mahadeb makes a second smaller cup and without the asking calls out to her, “Didi, ei nen.” He mutters, “The way you drank it up so hurriedly, I could tell it had gone cold.”

Mahadeb has been at this station the last 31 years. He tells me that at the very beginning he ran two shifts — one from 3 to 7 in the morning and another from 9 in the morning to 7 in the evening. “But it was too much. I used to doze off while making tea,” he says. After a while he discontinued the graveyard shift.

In these three decades he has built up a formidable memory bank of who likes what: more milk, less milk, little sugar, no sugar, tea with a sprinkling of coffee powder — oh yes! — the permutation-combination can be mindboggling.

On weekends, Mahadeb goes home to his village. The rest of the days, a neighbouring shop allows him to stay the nights on its premises. He says, “It did not happen overnight. It takes time to build trust.”

I notice that his recountings are full of money measures. For instance, he helps me understand Midnapore of 1978 by telling me how much a kilo of rice cost then. When he talks about his brief stint at the village school, under a tree with “boi, selat, talpatar chatoi… books and slate and a rug made of palm fronds”, he talks about how much one bigha of land cost those days.

When he talks of his life now, how he can afford the trip back home every weekend, he again breaks up the journey for me and gives the cost break up too. He talks about his savings, how the money is growing or not. How much he has to pay the odd-job man who fires the clay oven. The price of a litre of milk, then and now. Of the bhaanrs from Pilkhana thana. How every day he sells 300 medium bhaanrs, 100 big ones and then there be the plastic cups. What comes at what price, he rattles off. Why there is no elaichi in his tea anymore — cardamom comes at Rs 4,500 a kilo now. How he has procured notun ada… the season’s fresh ginger at Rs 100 a kilo.

This is his way of measuring life with specifics.

I wonder aloud at his exhausting routine — from setting up shop to washing the mugs and kettles and pans, he does everything by himself. He says: “Pet-er jala… It’s all to do with hunger. Have you seen how the ducks in the pond dip their heads into the freezing waters of the pond to fish out the snail and molluscs to feed their appetite. People like me are like that. We will do anything so we don’t have to go hungry.”

Mahadeb has raised three daughters — married off one — given them an education. Not higher education though, he qualifies. But that too he would have provided had they shown the aptitude, he says.

An elderly man walks away after his cuppa, without paying up. I look from his disappearing figure to Mahadebda. He says, “Shob march hoye geche [I assume he means mark and is saying he is familiar with all his customers]. He will pay in his own time. But there are some who tend to forget too. I don’t ask people to pay up. A chaiwallah needs a cool head; only the tea needs to be steaming.”

I ask him what makes Mahadeb’s tea, Mahadeb’s tea and he replies sagely, “The trick is only partly in the tea. It is mostly in the byabohar, khaatir… in the demeanour, in the putting at ease.”