Advertisement
Home / Culture / People / Challenges of being a woman auctioneer 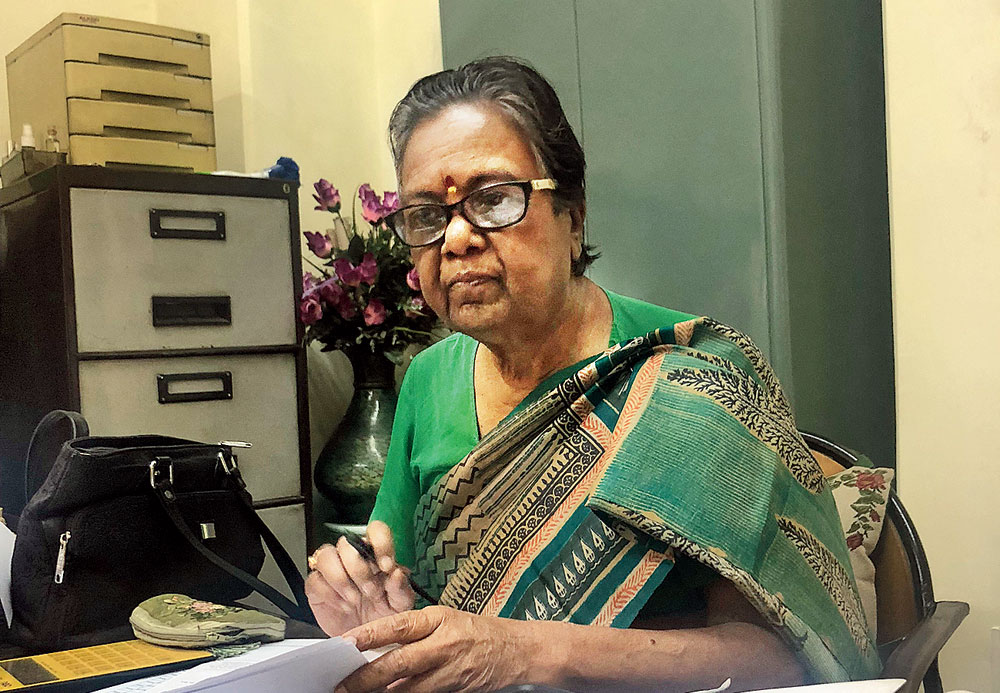 Bhanumati Parekh has just returned from Panagarh in Bengal’s West Burdwan district, where she had work at the army base. She is 83, exudes no-nonsense vibes, and is one of the few female auctioneers of India. As she herself puts it, she is possibly the only woman who auctions scrap, metals and machines.

Parekh owns one of the oldest auction houses in the country — Egbert Andrews Auction Mart. It is on Lenin Sarani in central Calcutta. She has been running it for the last 63 years. As a child, she watched her father, Jagmohan K. Parekh, conduct auctions. “I liked how this job had a sense of power and authority,” she says.

The auction house was started in 1888. Says Parekh, “My grandfather was associated with it then and my father bought it in 1920.” Those days, it seems, there would be auctions of furniture, jewellery and curios. Sometime in the 1940s, Parekh’s father switched from auctions of household items to government auctions.

Parekh’s first auction was at 17, and she took over the business five years later after her father suffered a stroke that left him paralysed. At this point in the conversation, her phone rings and she switches from Gujarati and English to fluent Bengali.

Once the call is over, Parekh says, “I knew from the outset that if I didn’t know the value of the materials, I would be doing injustice to my business. Those days there was no Internet. The only way to learn was to meet people, talk to them, absorb.” She introduced auctions in Steel Authority of India Limited or SAIL plants, defence units, Calcutta Port Trust and Hindusthan Cables Limited, among others.

Till about 20 years ago, most auctions would happen on location, in factory sheds or under the open sky. Parekh recollects how she has held auctions at army depots from Pathankot to Pune.

Always clad in a sari, she was the only woman at most of these auctions. She recalls how once she went to the Ichhapur ordnance factory near Calcutta. “Those days, women were not allowed to enter. After much convincing, they believed I had come for the auction,” she laughs.

Over the last 50 years, Parekh has dealt with all kinds of people — from goons to CEOs of companies. She says, “The new generation of buyers is literate but they don’t have much of an idea about the field. Most people I dealt with earlier were not so educated but they knew what the scrap would yield.” Parekh talks about how buyers would sniff a slab of zinc dross — an alloy of zinc and iron — and tell what per cent of zinc it contained. They would take one look at a heap of iron and steel and call out how many tonnes it weighed.

“Auctioning is not easy,” she says and continues after a brief pause, “If 300 people are sitting in a room, one has to be alert and aware of who is bidding, for how much. Not every bidder bids out loud, at times people just signal with their eyes. You have to know whether someone means Rs 100, Rs 1,000 or Rs 10,000. This profession demands experience,” she adds.

Of course, with a lot of the auctioning having shifted online, much of the excitement of the trade is lost. “Auctions demand material knowledge and understanding of human psychology but online auctions have eliminated this and auctioneers. But the government feels this is more transparent,” sighs Parekh.

Taking out a small purse from her handbag, Parekh walks towards a cupboard. She returns with a newspaper from 1934 and reads out an advertisement in Hindi — Jawaharat ka viraat neelaam. It is about an auction of precious stones and jewellery conducted at Egwart Andrews Auction Mart. Some of the items to go under the hammer were diamond nose-pins, emerald necklaces, pearl bangles. There is a line that says there will be special arrangements for women in purdah. “In those days, kings would bring their consorts and men from aristocratic families would bring their wives along for such auctions,” says Parekh.

And she starts to reminisce. “Once I was auctioning in the open yard of a vehicles depot. There were some jeeps that were to be auctioned. I was standing atop the bonnet of one.” She stops and looks at me through her thick-framed spectacles quizzically. “A four-foot something woman in a sari, shouting at the top of her voice for hours at a stretch. Can you imagine? And then someone shouted ‘snake’, and I leapt from bonnet to the ground,” and so saying she dissolves into laughter. Jagmohan K. Parekh beams from the garlanded photo frame on the wall.