This shed of sheds

Whoever said a factory is about machines and what they throw up? The grind of machinery will tell you more than one story 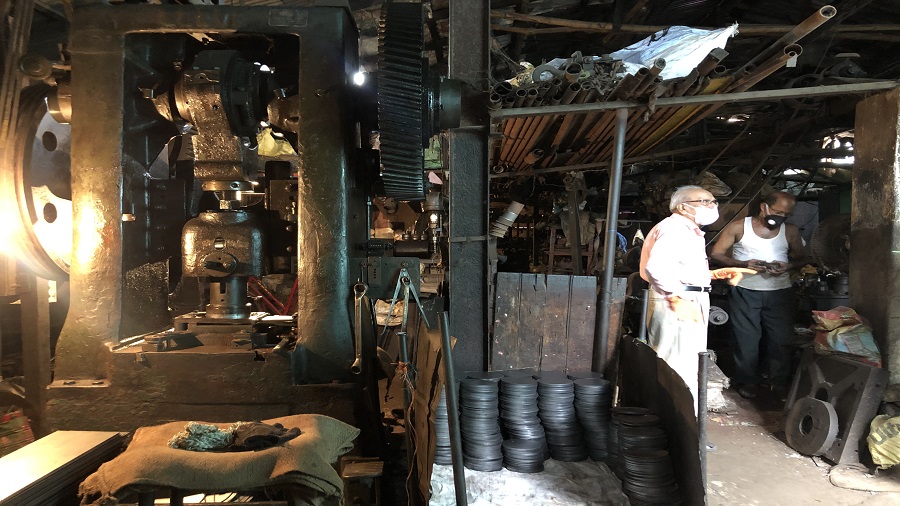 Who is to say what made Suresh Shah fall in love with central Calcutta’s Jogodyan Lane one day in 1965? The story goes that three friends, Ramniklal Bavishi, Suresh Gandhi and Shah — all in their early twenties — decided to start a business together. They planned to manufacture zinc buckets. Why? Because someone had casually suggested that there was a thriving market for it.

But first they needed to get a place of their own, to set up a workshop. They got in touch with a dalal who suggested a site.

The trio saw it, liked it, and after investing Rs 5,000 each, started their business here.

Six months down the line, Shah was left holding the baby. The other two had realised this was not going to be easy business and wanted out. From procuring the zinc sheets to galvanising them and getting orders, it was all back-breaking work. Says the 83-year-old, “How could I leave? I knew in my heart that this 2,000 square feet of land would define my destiny.”

Those days the place had an asbestos shade, a sandy floor and tin walls on four sides. There was no electricity. For drinking water there was a well in one far corner. Shah promised to repay his friends by and by. In the meantime, he invested some more money and bought three second-hand machines and tools to start a machining factory.

Machining is the word used by traders for manufacturing processes such as drilling, milling, sawing, shaping, welding. The first machine inmates of the factory were a lathe machine tool, a shaping machine and a pillar drill. Next came an electricity meter. But it was four years before the factory — Shah Engineering — formally came into existence. Shah says, “All my three children were born by then. This felt like a fourth child.”

Shah had to hire workers. Central Calcutta’s Dharamtalla Street and Moulali were hubs of machining karkhanas in the 1970s. Says Shah, “Those days, you would see people on these streets looking for jobs. Some wanted to work in two karkhanas for more money.”

That is how he came to find Sheetalda, Madanda and Shankarda, the first and last skilled workers of the factory. Shah cannot recall their last names any more and says he anyway called them “da” as they were senior to him by a good many years.

All this while Shah was getting orders from local parties but on a small scale. Sitting on an easy chair in his balcony, he now recalls, “One day, an acquaintance took me to Garden Reach, in the southwestern parts of the city. In a workshop there, they were doing fabrication work for Bokaro Steel Plant. They asked me a couple of questions, then gave me an order to manufacture 5,000 pieces of multi-stage cyclone fans, which would be used to melt steel.”

The factory was suddenly abuzz with work round the clock. Shah, who himself worked the machines, shaped, drilled and spot-welded, and his team delivered the order. It was a milestone. Some days later, two new residents arrived in the factory in the form of five-foot lathe machines.

The factory was really an extension of the family. Shah would bring his wife and three children to the factory year after year on the occasion of Vishwakarma Puja. The children would love the sandesh and little bhaanrs of mishti doi from the Bengali sweet shops in the neighbourhood that was served as prasad.

More orders poured in from Canning Street, Entally, Strand Road. Shah now needed more hands. His younger son, Pankaj, joined the business at 17. He would go to college during the day and work in the factory post noon. Then came three new hires — Bhambal Bhattacharya, Shyamal Sarkar, Ajit Das. Sheetalda and Madanda trained them and those that came after, until they passed away a decade ago.

Around the 1980s, a basti came up in the neighbourhood — most people living here were migrant workers from rural Bihar and West Bengal. Shah decided to make proper brick walls for the safekeeping of his assets. In between these cheek-by-jowl factories on Jogodyan Lane, there were small makeshift homes. Bhola Rai, who lived next to Shah’s factory, became Shah Engineering’s first caretaker. He was to ensure that the gates were locked and safety was maintained.

When Bhola’s brother, Raghu, arrived from Bihar in search of a job, Shah hired him. Today, Shah credits Raghu for the growth in the business. He says, “Ene maari saathe factory ubhi kayri... he helped me expand the factory”. The factory continued to buzz with orders and activity and life. Raghu got married and brought his wife, Mina, from Bihar’s Samastipur. The couple’s address was — the factory.

New walls were constructed within the factory, to create small rooms. Shah now got himself an office room. It has a wall calendar, a stool with a gunny bag atop to act as a cushion, an aluminium tin table with drawers — constructed in the factory — and a cupboard.

That is the way it has been for many years now, and that is how he prefers it.

Jogodyan Lane is full of buildings of varying heights, breathing down each other’s necks. Add to those paan shops, cycle-repair shops, garages, a kindergarten school and a government school for girls. In the bylanes, only two or three functioning karkhanas remain. Sharp metallic sounds emanate from them, and then there is the screeching sound of metal being scraped that will make the skin curl and the eyes close. But, a few decades ago, it was a different world.

Says Shah, “There were no residences here then. Only small and big karkhanas. When you enter the lane now, there stands a big building. That used to be a factory that manufactured press tools and dyes. A few small karkhanas also worked for a multinational. It was a clean, well-maintained neighbourhood. There used to be a pond too, right in front of our factory.”

In the late 1980s, Shah’s business contacts suggested he manufacture diesel engine parts. By now, the factory had procured power press machines of 50 and 100 tonnes, used to cut, bend and press sheet metal. And a new worker, Naba, joined the family.

The year India defeated Australia in the Benson & Hedges World Championship of Cricket, Shah started his own brand. He called it Kokel, after his wife, Kokila. He says, “We would sell silencers, cleaners and oil tanks.” Then explains that they are all components used for assembling engines that are used in the farming sector.

Mina, in the meantime, had gone from being a wide-eyed 14-year-old to becoming the mother of five children, all born a year or two apart from each other. And in the children’s school diaries, in the space for home address, the factory address beamed proudly.

Reena, Ruma, Ramkrishna, Hare and Punam learnt to play with tools instead of toys. A white cat, with golden-black swirls on its back, also started frequenting the factory. “Every day, when I’d have lunch in my office, the cat would come. I decided to feed her every day as a part of the factory family,” says Shah. From the next day, Shah’s tiffin contained four more rotis and a little flask of milk.

The cat made itself perfectly at home in the factory. She would be found sleeping between gunny bags, beneath the stool, on top of the machines. She gave birth to kittens, who grew up, went away but came back when it was time for their litter.
Raghu died and his two sons, Ramkrishna and Hare, dropped out of school and started working in the factory. They grew up, got married and brought their wives — Urmila and Abha — to live here. And then the millennium turned a corner.

Around 2000, some of the factories started closing down. The workers moved out and the machines were sold as scrap.

From 2005, both Shah and the factory’s destiny changed. The dragon had crept into the market. Says Shah, “Chinese engines were cheaper and more efficient, they had better technology too. What I sold for Rs 20,000 was being sold by the Chinese for Rs 8,000. Although durability was a question, our clients chose them over us. They were thinking about their survival.”

Shah continues, “Earlier, our orders would fill two tempos a week; now we send one tempo a month. One tempo can handle 300 kilograms of items.” He adds, “We are surviving only because we have a monopoly in some of the products we make and because our rates are reasonable.” With the neighbourhood now turning largely residential, builders started approaching Shah, urging him to sell the place. Says the greyhead, “I cannot shut the factory because the machines are so old now that they will yield me nothing and the livelihoods of all these people will be affected.”

In the meantime, Mina has become a grandmother. The factory is now little Khushi’s address too. Shah’s younger son, Pankaj, died and the cats do not come here anymore. Vishwakarma Puja is still observed every year at the factory, but motichur laddoos from Haldiram have replaced the Bengali sandesh.

The grand Shah of the factory shed is my grandfather. Living, by the grace of god.