The tradition of Dasara dolls is no idle worship

The annual festivity in Tamil Nadu, Andhra Pradesh and Karnataka upholds a legacy 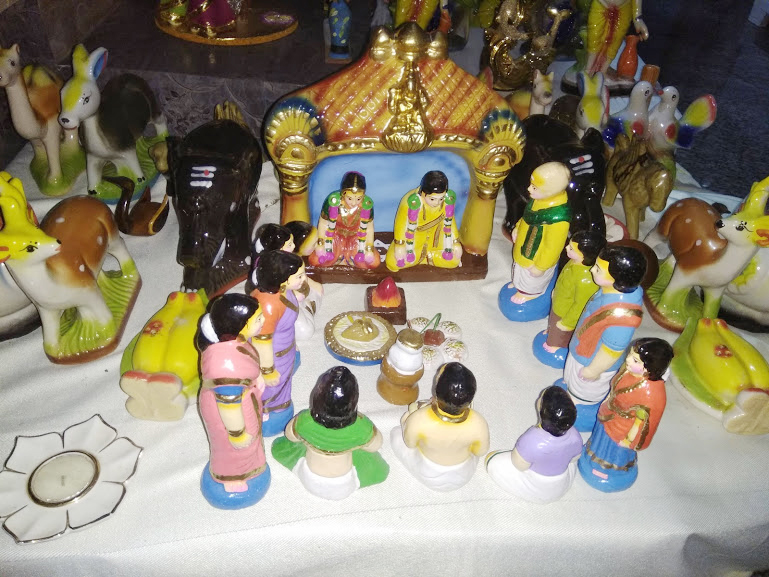 Golu, kolu or Dasara gombe (Dasara dolls) or gombe habba, as it is called in Tamil Nadu, Andhra Pradesh and Karnataka, is a tradition that rolls from generation to generation.

It is basically a display of dolls of mythological characters, superstars, animals, birds, artisans and even political leaders.

All the dolls are tastefully arranged on wooden steps covered with white cloth during the course of the nine-day stretch culminating in Vijayadashami.

In keeping with the hierarchical structure that pervades almost every field in India, these dolls too are arranged in steps according to their importance. It is not uncommon to find dolls of Gandhi, Nehru, Subhas Chandra Bose and others placed on the lowest pedestal.

My grandmother was a bit of a legend, not only for her collection of dolls but also the finesse with which they were displayed. She was also a bit of a stickler for rules. My mother doesn’t come anywhere near her mother in these aspects. But the fact that her elder sister made away with the family heirloom has, over the years, made my mother determined to improve her collection and display each year. A far superior doll collection of my sister’s mother-in-law hasn’t made her life any easy.

After several years, I was witness to her Dasara gombe this year and I must say she has come a long way.

She sniggered when I pulled her leg saying her mother had been streets ahead. But she jabbed back in time reminding me how I had not kept my promise of getting her idols of Ramakrishna Paramahamsa, Ma Sarada and Swami Vivekananda from Calcutta.

Complaints aside, one must tip one’s hat to the sheer utopian world in which these dolls live during the course of the navratris. Here’s a platform where heroes and villains of our mythology mingle easily. Rama and his entourage are seated next to Ravana, who looks better dressed and occupies more space with his 10 heads. Mahishasura with his raised sword occupies space behind Parvati and Shiva.

Political leaders are not part of my mother’s pantheon of dolls. But she told me how she spotted a Jayalalithaa doll at a neighbour’s display this year.

The origins of this fete are lost in the fog of time, but many in Karnataka trace it to Mysore’s Wodeyar rulers of the 19th century. There could be some truth to it as the Mysore palace is known for its Gombe Thotti or doll’s hall. The dolls, dating back to the 19th century, in all their finery, are one of the major attractions. No wonder that the famous Mysore palace model finds pride of place in many homes.

It is not easy to keep children away from these dolls, especially when they are all placed so invitingly right in front of them. And that is why, year upon year, myths about how touching the dolls brings bad luck are recycled. And they work.

What cannot hold back the children during the days of the display is the naivedyam or food offering. There is a new sweet every day for nine days.

I remember waiting outside the kitchen for my grandmother to cook and offer the first serving to the mute dolls and then throw open the goodies to us. This year, I watched my nephews and nieces uphold that tradition.

I wanted to gift my mother a set of the famous Thanjavur thalaiyatti bommai, the bobble-headed toys of Thanjavur. But when I checked online, they seemed priced on the higher side and I abandoned my plan. Looking back, I should have got them. I hope to do it next year and maybe even praise her for putting up a good show.

Dasara is how we call it, the annual festivity that concluded a while ago. The celebrations have long been dissolved in Mysore, famous for its Dasara jamboree, and every other city across Karnataka, but my mother drew the final curtain on the event only recently.

She had been busy rolling dolls made of clay, plaster of Paris and wood in bubble wrap, newspapers and even hay, all these days. The wrapped dolls were arranged in two large wooden boxes and they will see the light of the day almost a year from now. Maybe a fortnight before next Dasara.