Advertisement
Home / Culture / Heritage / Back then, at the burra bungalows of tea estates

Back then, at the burra bungalows of tea estates 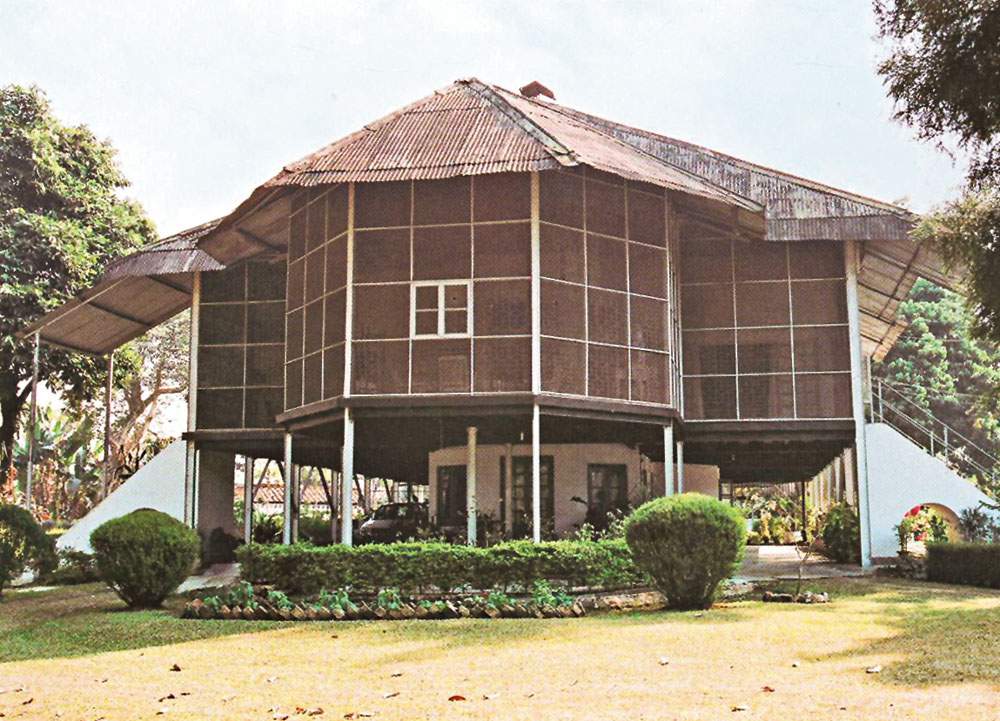 Tea estates in Assam and North Bengal have picturesque Raj-era bungalows such as this Chang bungalow in the Namdang tea garden
From the book, Burra Bungalows and All That
Moumita Chaudhuri   |   Published 29.12.18, 07:44 PM

A committee was formed and from a long list of 400 bungalows in Assam, 150 were selected on the basis of their heritage value and carefully documented. The research yielded the book, Burra Bungalows and All That, which was published in 2012. Yet another book on the bungalows of Darjeeling is in the works.

The burra bungalows can be categorised under two heads — the mati bungalow and the chang bungalow. Mati means ground and the bungalows so named were built at the ground level, while the chang bungalows stand on stilts, 10 to 14 feet above the ground, to keep away leeches, insects, snakes and the bad air, which was believed to bring on the malaria fever.

The burra bungalows were more than homes, they were also status statements. By and large, they had a common plan — large rooms, spacious and well-ventilated; high ceilings, and long verandas skirting the main building. Leafing through the book, one comes across photographs of these structures with intriguing captions — Namdang TG, “a haunted chang bungalow”; Marghertia TG, a hilltop house visited by Lord Curzon in 1904; and the Powai Bungalow, Digboi, with an adjoining pet cemetery.

The book contains random jottings of managers’ wives that give us an idea about lives within these grand spaces. A Marjorie Jane Imries’s notes from the 1940s reveal how the “derzee” or tailor would sit cross-legged on the verandah and within an hour produce a dress for the memsahib, who would have just shown him a catalogue. The veranda was also where the carpenters perennially hammered and chiseled away. This is where the dhobi or washerman offloaded his bundle and the travelling salesmen made their supplications.

Burra sahib and his wife in the Cachar area entertain guests at tea time with help from Indian staff
Image: From the book, Burra Bungalows and All That

The book is missing detailed pictures of the interiors of the bungalows, but there are many of the staircases. Those days, Burma teak was aplenty, and not surprisingly, all the woodwork, right from the staircase to the wooden flooring, was done in teak. Flipping the pages one is also amazed by the sheer variety of chairs from those times. There is what you call the planter’s chair, a low easy-chair with an inclined seat and arms that fold in and out; majestic straightbacks, love-seats and whatnot.

It is evident from the research that the heart of these bungalows lay in the kitchen. These were huge and often came with a bakery at the back of the house and a bountiful kitchen garden which grew seasonal vegetables and also celery, dill, chives, aniseed.

Legions of gardeners nurtured trees growing the litchi, mango, star apple, guava, black jamun. For everything else that could not be grown, there was the local provision store or the shipment from London — jams, jellies, preserves, cheese, gin, port, brandy, cigars — that arrived via Calcutta. It has been noted that in the absence of refrigerators, beer was kept chilled by immersing a sackful of bottles in a stream or in the bungalow well.

Nayantara Palchowdhury is the vice-chairperson of the Indian Tea Association and a fourth-generation tea planter from West Bengal — she owns tea estates in Washabari in the Dooars, Mohurgong and Gulma in the Terai. She has stayed in many of these burra bungalows. She has also grown up hearing stories about their early occupants from old chowkidars and malis. And while so many years later, it is difficult to sift fact from fiction, prejudice from reality, a picture can be pieced together.

The verandah of a burra bungalow
From the book, Burra Bungalows and All That

Says Palchowdhury, “The managers were mostly Scottish. They would come and stay here all by themselves, very rarely accompanied by their families. They lived a vibrant life with the club instead of the home forming the axis.” A lot of these club buildings endure. The book has photographs of the Jorhat Gymkhana Club set up in 1876, the Tezpur Station Club established in 1875 and the Mangaldai Polo and Gymkhana Club set up in 1890 — the latter has a canon-like water sprinkler from the late 19th century used for tea bush irrigation. The club evenings were apparently scheduled midweek to give the manager and his men a relief of sorts.

According to the book, this was the unwritten protocol of club culture: “…managers grouped together close to the bar, while the assistant managers sat separately further down and they had to wait before the seniors raised their glasses and had their first sip. So also it was at the end of the evening, when the juniors could not leave before the seniors had had their fill…”

The central characters of the estate might have been the planters and their families but it was the side characters who infused these desolate geographies with a lively rhythm. The book makes references to the “syce” or sahish, meaning groom, who became the “gharrie waller” or the car-wash when horsedrawn carriages were replaced by the motor car. There was the mali or gardener who helped the memsahib grow giant dahlias and prize chrysanthemums for the annual flower shows; the man who emptied the toilet boxes known as the thunder boxes then; and the ayah singing the baby to sleep.

One Ann Patricia Walsh writes: “This is one that Ayah Didi said to me at night: Neeni, baba, neeni, roti, mucken, cheeni…Roti mucken hogia, chota baba sogia…” Marjorie notes how, come Christmas time, Santa Claus always arrived by unusual means. “I can remember him once arriving on the back of an elephant, and on another occasion he came on a bullock cart.”

Beyond the great big bungalow, further away from the club, hospital, church and cemetery, lived the side cast — out of sight, but not out of mind. According to Palchowdhury, even in the 19th century much of the labour force was from China. “Tea plantations were common there and Chinese labourers had some experience in growing tea,” she says. In the early years of the 20th century the cooks employed in the bungalows came from Chittagong, now in Bangladesh.

Palchowdhury remembers the many stories of ghost sightings she has heard as a child and as an adult. She says, “One chowkidar told me he can hear the sound of horses’ hooves at night. A gardener said he had seen more than once the foggy frame of a woman roaming the bungalow premises.”

Ghost or not, the past is clearly clamouring for attention.

The Namdang TG, a mati bungalow built some time around the early 20th century
From the book, Burra Bungalows and All That

Geographies such as the hill districts of Assam and north Bengal are typified by sprawling tea gardens. And what are tea gardens minus tea estates with their picturesque Raj-era bungalows, clubs, hospitals, churches, all ensconced in lush settings with no less than the Himalayas as backdrop?

The burra bungalows — as they are still referred to — were the homes of the burrasahibs or the managers of the tea estates. There were chhota bungalows too, which were the residential quarters of the assistant managers. “Many of these bungalows are no longer there,” says G.M. Kapur of the Indian National Trust for Art and Cultural Heritage, or Intach, a non-profit charitable organisation.

Some years ago, a former chairman of the Tea Board of India, Basudeb Banerjee, raised alarm to this effect. His point: the planters were wedded to their tea estates and built bungalows that were of architectural and historical significance. Says Kapur, “Thereafter, we took up the task of documenting the bungalows.”