Patuli floating market is lit up through the night. Big trees have been felled for the project 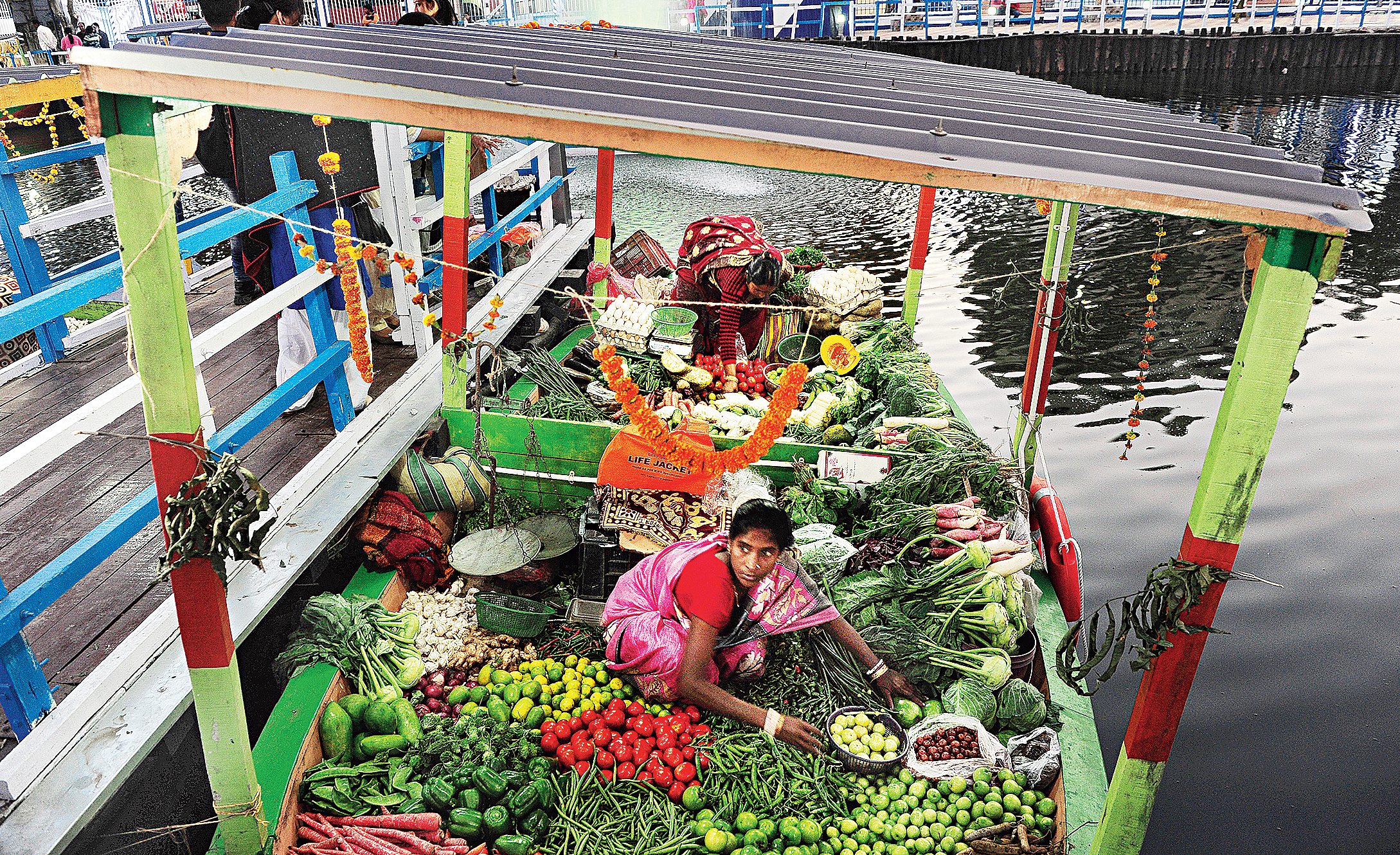 The floating market at Patuli has been modelled after one in Bangkok
Image: Subhendu Chaki
Moumita Chaudhuri   |   Published 03.11.18, 06:40 PM

In January this year, Patuli in south Calcutta made headlines for its floating market. When we visit it, the canal along the Eastern Metropolitan (EM) Bypass, stretching for 500 metres, is heavy with more than a hundred bobbing boats. The municipal corporation has cleaned the channel, taken care of the drainage lines and installed two big fountains with multicoloured lights.

Big trees have been felled to create space for art installations and benches.

Patuli was once a low-key country cousin. But in the name of development, all has changed. This evening the place is teeming with people. People on the benches along the canal. People shopping at the bazaar. People taking selfies ad nauseam inside the market. People visiting the fairground. And then of course, there were the blinding lights, the microphones blaring Rabindrasangeet and the cacophony emerging from the mela ground.

Gopal Naskar, secretary of the hawkers’ association of Patuli, boasts, “Rs 10 crore has been spent until now to set up this market. Firhad Hakim, Bengal’s minister of urban development and municipal affairs, floated the idea of such a market after seeing one in Bangkok.”

To jazz it all up, the municipality threw in more lights. The shopkeepers added more. Halogen lights, a cluster of seven per lamp post, stand every 100 metres. Then there are CFLs (compact fluorescent lamps) and LEDs (light-emitting diodes) besides the traditional orange-yellow street lamps. All of it keeps the place strikingly lit up even through the night.

However, within weeks of the inauguration, residents of the area noticed something strange. The sizeable avian population — storks, magpie-robin, bulbul, dove — was missing. Says 80-year-old Aloka Das, “The migratory birds seem to have abandoned the place. There was a time when I could spot 20-25 parrots. There were storks. There were bou katha kous or Indian cuckoos too. Bird watchers frequented the place in winter.”

Restoring art to its former glory

The birds that remain are a disoriented lot. Late in the evening, mistaking the bright lights for daylight — a single halogen light is anything between 500 and 1,000 watts — they keep chirping. We hear this for ourselves. The sparrow, the mynah, the common crow and many others chirping and cawing well into the evening, striking an unnatural note.

“It is a scientifically established fact that birds need a place to roost in or else their biological clock will go topsy-turvy. This can have dreadful consequences,” points out Shyamal Banerjee, president of Green Nagarik, an NGO that works on environment-related issues.

Dilip Chakraborty has been a resident of the neighbourhood for the last 30 years. He asserts that he and many others have found birds lying dead by the canal and the floating market.

The floating market is not at fault, argues Naskar. He has his own story. Rekha Marik, who owns a floating grocery shop and is also the secretary of the West Bengal Mahila Hawkers’ Federation, says, “For the last 27 years, we did not find a permanent place for our bazaar. We cleared the weeds that were a regular feature on this stretch of the EM Bypass and created a market for the apartments that had mushroomed around here. But every year the government would destroy it.” This market is an alternative to that makeshift bazaar.

But from the sound of it, commerce’s gain has been environment’s loss.

Another resident, Subhadra Sen, says, “The evenings in Patuli will never be the same again. The trees have been mercilessly trimmed to accommodate the stylish lamp posts.” However, Sumit Sen, who is a keen birdwatcher, does not agree to these allegations. “Birds do need a roosting place but it is erroneous to think that hard lights would affect them or kill them. Birds also sleep in broad daylight. They can sleep despite halogen lights,” he argues.

Neither he nor Banerjee of Green Nagarik has an explanation for the bird deaths. However, what Sen does concede is that the noise and human interference could impact them.

When we leave the market, a local politician is addressing the crowd. His voice booms through the microphone: “Whatever the people in the media might say, there are birds here. Development or lights has not killed them. Let me tell you, I wake up to the call of the woodpecker every day.”

Before gyms, some exercised here by candlelight