A friend of Dwarkanath Tagore, this Parsi Babu loved Calcutta

Rustomji Cowasji Banaji, who brought his family by sea in 1838, played a major role in the making of the modern city 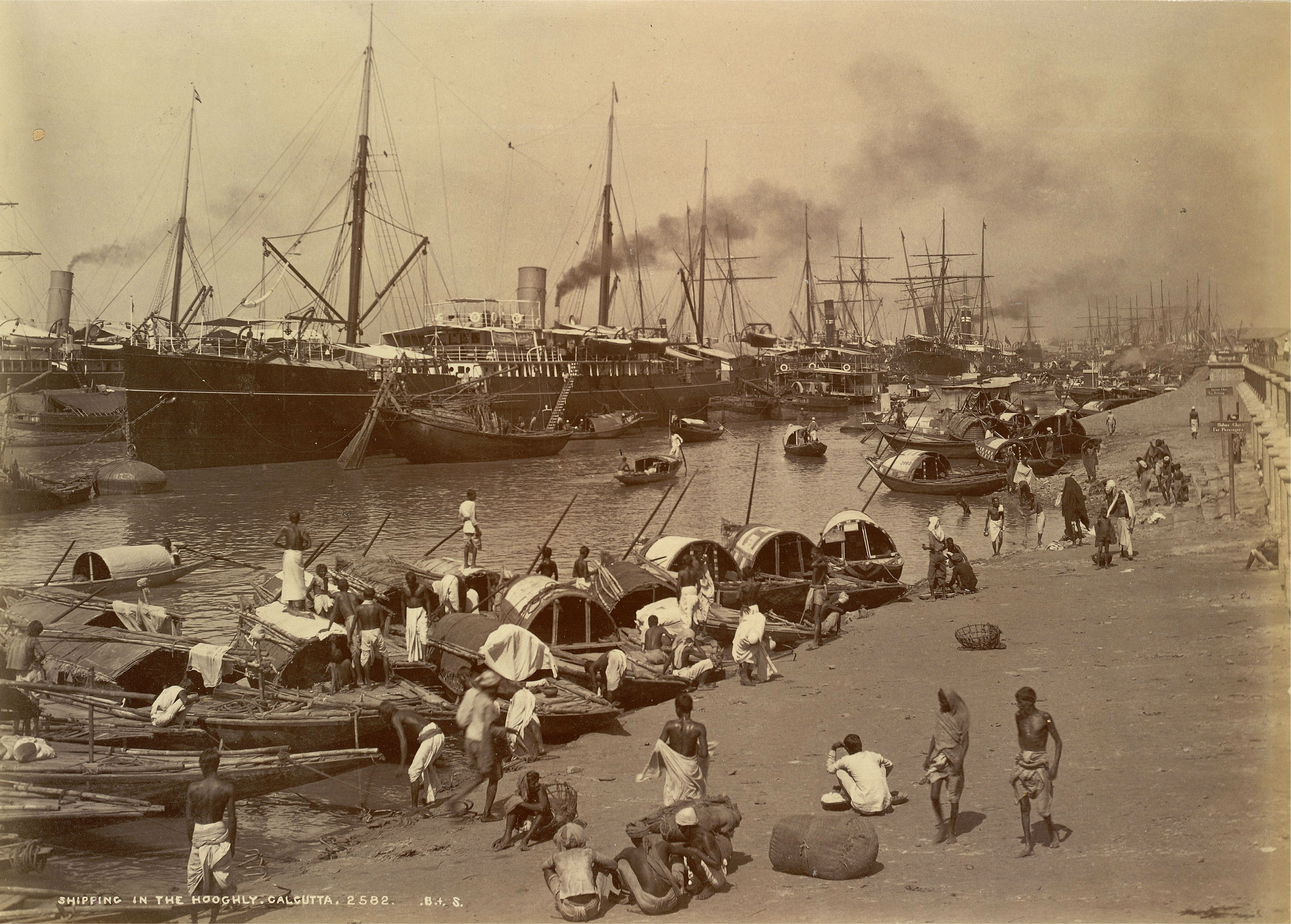 Shipbuilding was a lucrative business in the early nineteenth century
Pinterest/oldindianphotos.in
Prochy N. Mehta   |   Published 22.02.20, 10:22 AM

This is the story of “intrepid men who had left settled homes in the west to journey to Calcutta to start a new life” two centuries ago. Some of them went on to make “millions and lost it all and started again”. Prochy N. Mehta’s book, Pioneering Parsis of Calcutta, is an account of the community’s bond with the city. Meticulously researched from private letters, newspaper clippings and illustrations, the book brings to life people who deserve to be remembered. Rustomji Cowasi Banaji was one such “forward-looking men”. A friend of Dwarkanath Tagore, Rustomji Babu, as he was endearingly referred to, was the owner of Kidderpore and Salkia docks and a pioneer in banking, insurance and social service. He was also the first Parsi to bring his family, women and children, to Calcutta, unheard of in the early 19th century.

The history of the Banaji family in Calcutta begins in the year 1750. Banaji Limji was born in Bhagradandi near Surat. When the British shifted their operations from Surat to Bombay, he came to Bombay in 1690. He started his own trading business in opium and silk with China, Burma, Siam and some other countries. Each voyage would take six to twelve months.

Dadabhai Behramji, grandson of Banaji Limji, was the first Parsi to come to Calcutta in 1767. When John Cartier was appointed Governor of Bengal, he persuaded his friend Dadabhai to follow him to Calcutta.

Rustomji Cowasji Banaji was the nephew of Dadabhai Behramji. In Bengal, he was affectionately called ‘Rustomji Babu’. He was born in Bombay in 1792 and came to Calcutta in 1812. He made two voyages to China and then in 1817 he made Calcutta his home. In 1821 he started his own business in the name of ‘Rustomji Cowasji’.

The Government Gazette of 3 April 1828 published a list of persons eligible for special jurors in the Supreme Court of Calcutta, with the necessary qualification. Rustomji was described in it as a merchant owning properties worth two lakhs of rupees.

Raja Rammohan Roy emphasised that the salvation of India lay in its industrial development. Rustomji Cowasji and Dwarkanath Tagore tried to realise the ideas preached by the Raja.

Rustomji was passionately involved in the insurance business. The Calcutta Monthly Journal 1835 states: 'The committee of insurance offices have deputed Mr WM Carr and Rustomji Cowasji to receive and distribute the funds, and they paid the amount of salvage on 25th September without waiting for the bill of lading etc. which was remitted from China to the Agent of Captain Hawkins, being delivered into their possession.'

In July 1834, Rustomji was elected Director of The Union Bank. In the British Friend of India magazine dated 21 July 1842 we find a reference to Rustomji: ‘Rustomjee gave up the post of Director in favour of his son Maneckji Rustomji. Rustomji remained the biggest shareholder in the bank.’ Owing to the scheming of interested parties, including its European directors, the bank finally collapsed in 1848. In those days, when the banking system was in its infancy, shareholders were held responsible for a bank’s failure. Creditors could sue any and every shareholder to realise their dues. Rustomji lost his entire fortune trying to settle the creditors’ claims. Once a merchant prince, he was reduced to a beggar on the streets after the crash.

Shipbuilding was a lucrative business in the early nineteenth century. Rustomji Cowasji started the Docking Company on 16 January 1837. He purchased the Kidderpore Docks from the estate of the late James Kedd at Rs 2,51,000 and Salkia Docks from M/S Kerry & Company at Rs 2,00,000.

Rustomji Cowasji was also a prominent ship owner in those days. Rustomji Cowasji & Company was heavily into shipbuilding. It owned about forty ships. They carried out trade between Calcutta, Madras, Ceylon, Bombay, Singapore, China and Melbourne.

Half of Rustomji’s ships were chartered by the British Government 1839 onwards for war purposes for Rs 11,500 a month. The Golconda, one of Rustomji’s ships, was destroyed in the China War. Some of his ships also carried mail to different countries and some were hired for sending Indian labourers to the Mauritius Islands.

Rustomji Banaji had vast trading interests in China and one of the principal commodities traded was opium. The ships were called Opium Clippers. In 1839 the Chinese government forbade all trade in opium and ordered all opium traders in China to surrender their entire stock of opium lying in Chinese ports. The Chinese army took over the offices of the European and Parsi traders and seized all the opium. The traders were arrested. Later, due to the efforts of the British Ambassador to China, they were all released. It was estimated that opium worth rupees three crores was seized. This was a great loss for all the traders.

Meanwhile, the route to the west via the Suez Canal was discovered and Rustomji Cowasji, Dwarkanath Tagore, Motilal Seal, Ram Comul Sen and nine Europeans started a company called Percursor Scheme Committee to carry mail between the Suez and Calcutta.

The Indian General Steam Navigation Company with Rustomji Cowasji, the only Indian, on its board was started in 1844 to formulate an inland steam navigation system.

As a social reformer, his public activities in social, political and intellectual spheres had far-reaching effects.

In 1838 Rustomji brought his entire family to Calcutta by sea. This extraordinary event was widely reported in the newspapers. The Bombay Gazette of 16 July 1838 wrote:'Our Parsi friends, who have for so long been foremost among the natives of this country in everything connected with commercial enterprise, are now about to set an example in what may at first sight be considered a purely domestic matter but which will in all probability in its ulterior results, from throwing aside the trammels of ancient prejudices, mean the production of singular changes. The lady of Rustomji Cowasji, the distinguished and liberal minded merchant of Calcutta, is about to sail from Bombay for that Port in a few days, accompanied by the wife of his son, and a cortege of female attendants. To those who remember that but a few years ago, no Parsi female of respectability would proceed even to the Deccan. The contemplated trip of these fair villagers will afford such food for application upon the rapid change which the march of opinion has affected.'

Rustomji Cowasji was a committed social worker and encouraged education.

In memory of Dwarkanath Tagore, the Dwarkanath Tagore Endowment Fund was opened in 1846 to provide cultural and technical education to a fixed number of boys in the University College of London. Rustomji Cowasji was a trustee of this fund.

The Agricultural and Horticultural Society was formed by Rev. William Carey in the early nineteenth century. Rustomji contributed liberally to the society. He gave financial aid to build Metcalfe Hall, the society’s permanent abode.

Rustomji was very liberal with his wealth. According to the Modern Review, July 1833, Rustomji’s contribution to the improvement of Calcutta cannot be over estimated. Tiled huts, streets, tanks, drainage, hospitals, ferry system bear testimony to his love of the city. The District Charitable Society of Calcutta (1837) supports this assertion.

Four geographical landmarks bearing his name still exist in Calcutta and Cossipore: Rustomjee Street near Ballygunge Phari; Parsi Bagan, the site of his bungalow on Upper Circular Road; Rustomjee Ghat in Cossipore; and Rustomjee Parsi Road in the same neighbourhood.

Excerpted from Pioneering Parsis of Calcutta by Prochy N. Mehta, with permission from Niyogi Books