There is more to the raw mango than meets the tongue

While the raw mango has never quite captured the imagination of the poet and the writer, the culinaire is not unaware of the cheeky goodness of the juvenile fruit 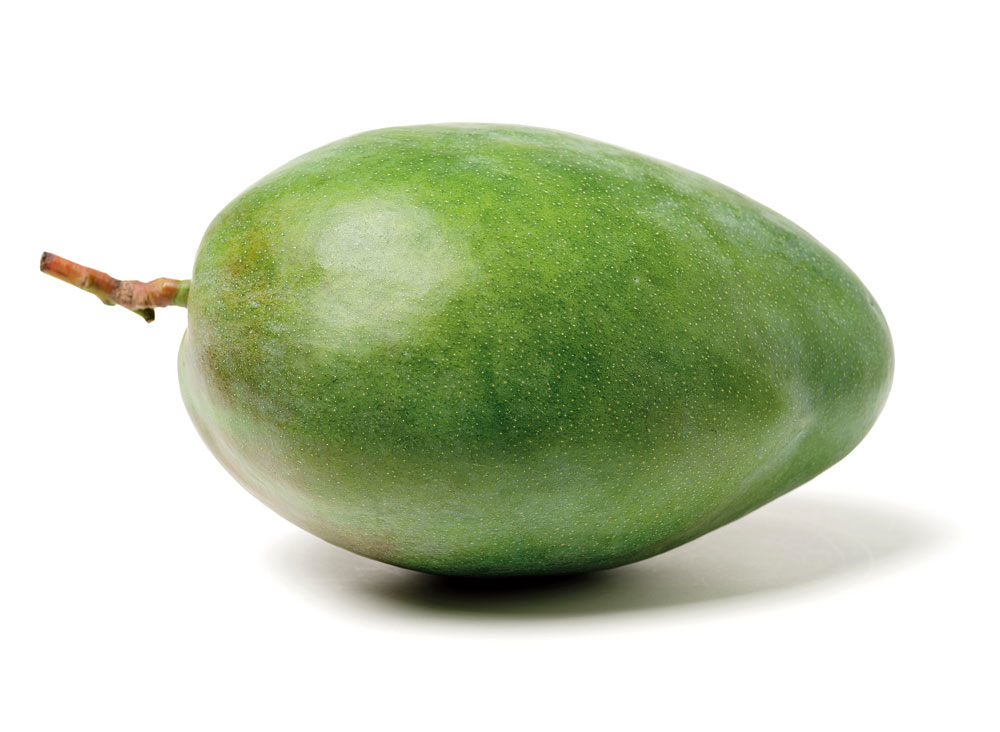 The small vegetable market in south Calcutta was humming with busy shoppers that Sunday morning. Past the woman sitting with a heap of coconuts, a little beyond the man selling all kinds herbs — dhaniya, pudina, neem, rasun pata — there was a crowd. From the centre of it, a voice emanated — “Hundred rupees a kilo. Hundred rupees a kilo,” it kept ringing over and over again. As the crowd thinned over the next couple of minutes, the source of the voice revealed itself. A man sitting on a raised space and before him a blue plastic sheet heaped with shiny dark green mangoes.

The mango lords over the cruel Indian summer like no other fruit, but that would be the ripe mango. The kancha aam or the raw fruit for some reason does not figure in the mango debate that happens year upon year — Langda/Maldah better or Hapus, what Himayat, who Dussehri, why not Chausa? And what about Himsagar or Benganapalli — are they mangoes or geographies?

The kancha aam has never quite captured the imagination of the poet and the writer for whom ripeness is all, but the culinaire is not unaware of the cheeky goodness of the juvenile fruit, the sheer verve of it before it ripens and rots.

“This year there will be plenty of kancha aam; the city has experienced at least eight kalbaisakhis (Nor’westers) since the beginning of summer,” two elders tell each other assuringly as they buy half-a-kilo of kancha aam each. The kalbaisakhi, speedy and restless itself, agitates the mango trees, shaking up the heavy branches till the taut green drupes fall to the ground.

But the raw mango is not available only as a result of storms. Rishi Krishna Deb, who is the project director of Malda’s Agriculture Technology Management Agency, says, “It is essential that a certain volume of the fruit is plucked when it is still raw. One reason is to relieve the trees of their own burden, or else the branches will yield to the weight. The other reason is that there is a market for kancha aam, which, if left untapped, would impact the demand and supply of the ripe fruit.”

According to food blogger Sayantani Mahapatra, “Not every variety of mango can be had raw. The kancha aam that we find in the market belongs to the smaller and hard varieties of mangoes such as the Sindoori or Kishan Bhog. After all, kancha aam has to be sour, very sour.”

Kalyan Chakraborty, who teaches at Nadia’s Bidhan Chandra Krishi Viswa Vidyalaya, has written papers on raw mangoes. He says, “The ones that come to the market are categorised as baaro mashi and dofala. They are also referred to as aatir aam or gutir aam, a reference to their random origin.” The other variety sold commercially is the kancha mithe aam — light green with quite a bit of flesh and small seeds. “These are supposedly sold best before the formation of the stone or aanti when they are sweet and sour to taste,” says Chakraborty.

Aparna Bhattacharya is 80 years old, a retired Sanskrit lecturer living in Calcutta. She recalls her growing up years in Berhampore and those tangy memories, as they turn out, come inextricably yoked with the flavour of the kancha aam. The first thing that comes to mind at the mention of kancha aam, she says, is the kalbaisakhi. Bhattacharya says in her ancient sandpapery voice, “At 2-2.30 in the afternoon, in one corner of the northeastern sky a cloud would start to form a knot. We would rush to the rooftop to collect the clothes that had been put out to dry. And then the rain would come down in big fat drops sometimes followed by hail. When all was over, broken branches and woodpeckers’ nests would dot the ground, the courtyard, and there would be mangoes upon mangoes all over.”

Bhattacharya talks about how only commonplace mango trees would be so vulnerable to the storm. “The sturdy Bombai [aam] would hardly fall as it had a hardy stem. After the storm everyone would stream out of their homes with buckets and baskets and to collect as much fruit as possible.” Nibedita Majumdar, who grew up in Dhanbad in the 1980s, remembers the first taste of the season’s first raw mango. She says, “The mango fallen on the ground would be covered with earth, wet and clingy from the first showers. My mother would soak the mango in water till it was squeaky clean. She would then peel the fruit with the boti, or hasua, crush it along with green chillies, salt and a sprinkling of sugar with the shil-nora (mortar and pestle) into a rough tangy heap. Large leaves would be washed, twisted into cones and loaded with small helpings of the crushed mango. We would gleefully suck at the bottom of the cone till the sweet, sour and spicy water was no more and then we would proceed to attack the fruit.”

Supriti Chakrabarti, 85, recalls, “On summer afternoons my siblings and I would go kancha aam picking. I would be the one to climb the tree and swing from one of the lower branches laden with mangoes. The others would jump up and pluck the fruits.”

Once raw mangoes hit the market, the tradition is to prepare aamshi or the sun-dried version of the mango. In the olden days, as Bhattacharya recalls, the fallen fruit — bruised and battered — would be sorted by the elderly women of the family. She says, “The mothers and aunts would wash and cut open the kancha aam and slice it finely. And the stone with some flesh on it would be sunned. After a couple of days it would give away and the dried mango would become aamshi.”

Aamshi, as Deb explains, is used in cooking during those months when there is no mango available in the market. It goes into the aam dal — a preparation of masoor dal that cools the body — and the aam pulao, which is more popular in Bangladesh. Some people also preserve the fruit as aamchur.

Today, people rarely make the aam pora sherbet from scratch but it is not difficult to make. The flesh of the raw mango is roasted, then sweetened with sugar and thereafter, spiced with roasted cumin. The paste is then used as a base for the flavoured drink. Says Koushik Majumdar, who is one of the owners of the iconic central Calcutta sherbet shop Paramount, “We have some original mixes — raw mango pulp mixed with yoghurt and cream and a water-based syrupy drink with the tangy pulp.” In aam panna, which is a popular coolant in the northern and western parts of the country, the mango is boiled and not roasted.

Bhattacharya talks about the customary aam tel that she prepares at home — mango doused in a boyam, or glass jar, of mustard oil and left out in the sun with its mouth covered with soft cloth. Aam tel has variants in Bihar and north India. In some places it is called sukha achaar or gharwala achaar. In Andhra Pradesh it is known as avakaya and it is generally made in sesame oil. While the spices are nearly the same in most places, in Bengal the preparation uses more oil. “This is because aam tel is used liberally in cooking and also had with muri,” says Mahapatra.

Among condiments there is the aam kasundi, wherein the mango is pickled in a paste of mustard blended with chillies, garlic, turmeric, mustard oil and a dash of lemon juice. It can be used as a dip with crisp chicken cutlets or fish fry. What’s with the propensity to punch raw mango with mustard in Bengali preparations? Says Ranjini Dutta, who teaches clinical dietetics and community nutrition, “Mustard contains allyl oil, an essential oil whose pungent note tempers the acidity of the raw mango and unlocks its unique flavour.”

Mahapatra talks about main course preparations such as sol fish cooked with kancha aam and mustard, which she says is peculiar to Bankura, Birbhum and Midnapore. “The gravy is thick unlike my mother’s aam jhol, another fish dish seasoned with green cardamom,” she adds. Malayalis make the Aleppey fish curry with raw mangoes and a prawn dish that goes by the name manga chengming curry.

And then there is the gur aam, wherein the slices of fruit are stirred into the jaggery kept on low heat and thereafter finished off with a sprinkling of roasted panch phoron, red chilli flakes and cumin. In Uttar Pradesh it is known as aam ki kalaunji. “While we in Bengal chop the mango into cubes, for aam ki kalaunji, it is sliced longitudinally,” says Mahapatra. Murabba or morabba, as it is known in different parts of the country, is prepared in a fashion similar to gur aam, only the gur is replaced with sugar syrup. Then there is the kancha aamer ambol, an ethereal sweet and sour soup that comes right at the end of the meal, aiding digestion. And the list goes on.

None the wiser is the poet or the writer for overlooking the kancha aam — ripeness is not all.

Ever thought of visiting a broom museum?