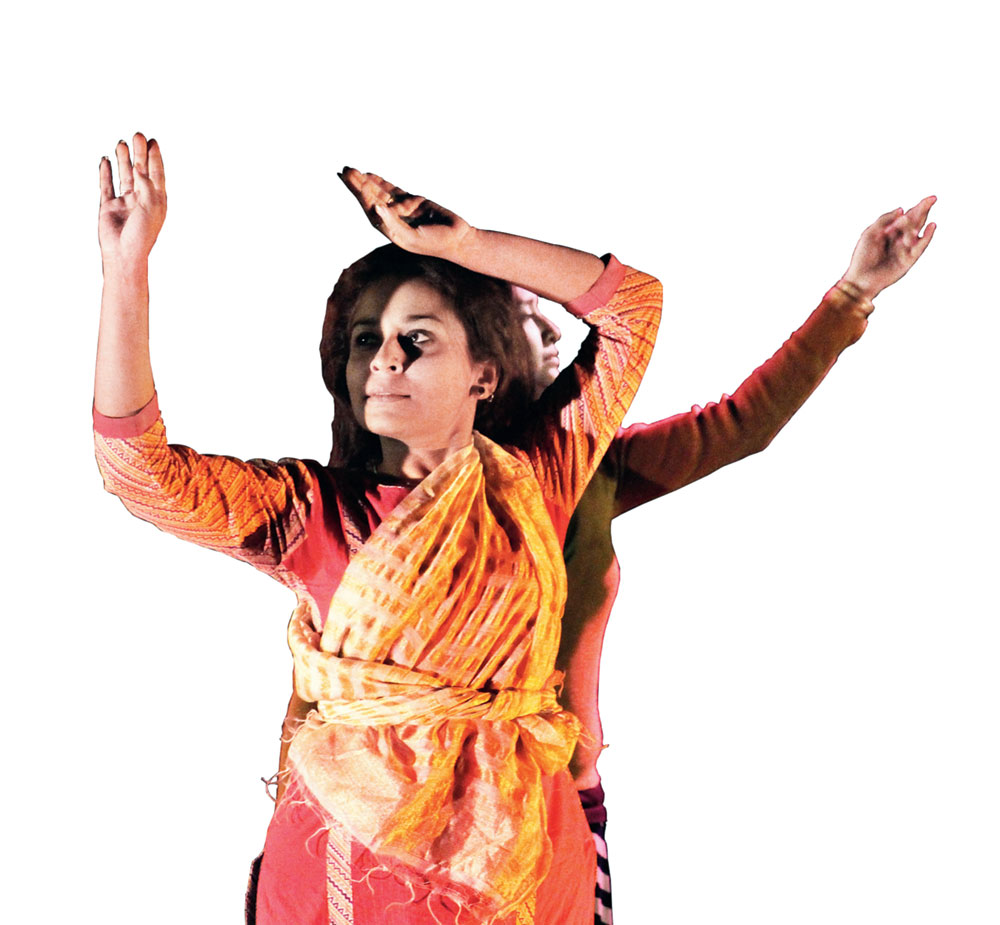 Jhoraphul is Bengali for flowers that have fallen off a tree, from grace, a fair distance away from legitimacy. Roopkatha means fairy tale. The flier for the play, Jhoraphuler Roopkatha, says, “A tale from the red-light areas of Calcutta performed by sex workers and Kolahal Theatre workshop.” (The Kolahal theatre group was set up in 2018 and it works with stigmatised people on issues that concern them.) When I am watching the play in south Calcutta’s Tapan Theatre, I cannot tell who is a professional actor and who is a sex worker.

The setting of the play is a red-light area. The personas, the costumes, the mannerisms, the dialogues, all of it is gritty, grating even in places. It is the third show since January and the auditorium is nearly full.

The advert also makes the point about the characters finding solace in Rabindranath Tagore’s creations. The director has, along with kirtan and folk music, woven in some of Tagore’s songs. I am reminded of something I heard at the BJP party office on May 23. A man telling a foreign media channel with suitable outrage, “We are not allowed to invoke Tagore or his songs in Bengal, such is the state of affairs...”

Jhoraphuler Roopkatha has been conceptualised by Bengali film actor Nigel Akkara; the director is Chiranjib Guha. I learn from Guha later that apart from four or five characters, most of the actors are sex workers. He says, “The play is about sex workers. What they make of Tagore.” As the play unravels it becomes clear though, the poet is a touchstone here, not the hero.

Guha says he chose to work with sex workers to refract Tagore, thinking this would be a section that would be less aware of the man’s works. He tells me after the first workshop, after his hesitant speech about Tagore, one of the women said to him, “Shunun Sir, ekta kotha bolbo, Rabindranath na karur babar noi, Rabindranath shobar.” She was basically giving him the verbal equivalent of boxing the ears, reprimanding him for assuming that the group would be unaware of Tagore simply by virtue of their profession. Guha, who is an actor himself, cannot have a regular conversation. He breaks into delightful impersonations — sans malice. One minute he is the affronted Kalidi, next minute he is he and he is saying: “It was a jolt. I realised she was right. Who the hell are we to judge anybody?”

Initially, Guha and Akkara tried to contact the sex workers directly by walking into the red-light area but they were shooed away by the pimps. After a few abortive attempts they found an intermediary in Durbar, an NGO that works with sex workers. The authorities at Durbar understood what they were trying to do and introduced them to a group of 40 sex workers. After a couple of interactions and workshops that number came down to 14. And these 14 came to be part of the cast of Jhoraphuler Roopkatha.

When Guha talks about theatre, this particular play, about life even, there is a word and its variant that keeps cropping up — shahosh or courage. He talks about his mother, a vocal and empowered woman. He talks about his wife, who didn’t hesitate to confront civic officials of New Barrackpore when they tried to stop his earlier production, Bishakto Panchali, which was about transgenders. He uses shahoshi or courageous to describe Akkara, he uses the word for himself negotiating prejudices of relations, and he uses the word for the men and women in his theatre group and the sex workers they are collaborating with. He uses the word for Swarnakamal, the transgender actor who plays the transgender Billy. He says, “I had asked him to urinate on stage, in keeping with the character he was essaying and he readily accepted the challenge. But when we did a preview for some experts, I was told to tweak the scene as it came across as vulgar.”

The act and from what Guha says itinerantly about the dedication of sex workers makes me wonder what it was that they got out of the whole effort. After all, it was not just one play or a few shows, but rehearsals, workshops, and most important perhaps, a certain way of looking at things one had perhaps gotten used to unseeing. And then there was Tagore.

Curiously enough, every time I throw the question at somebody, they turn the dagger of a question mark on themselves — what they got out of it. Tanni Chakraborty, a college student who plays Tia, one of the central characters, says, “What is the point of education if we are not going to see things in a different way?” Both she and Nilanjana Majumdar, who is doing her master’s and played Padma, bring up the hours spent in Sonagachi observing the sex workers and the dalals and what they learnt from the experience. Nilanjana talks about the bond that she and the other professional actors eventually developed with their co-actors from the forbidden place. Mithun Gupta, another professional actor, who plays Tia’s long lost love, Siddhartha, talks about the initial murmurs of protest from within his family when he embarked on project Jhoraphul. He then goes on to point out that after the first performance, his mother met a sex worker backstage and congratulated her. Nearly everyone talks about the meals shared with the sex workers as a wondrous and precious experience. I am reminded that Guha had said at the outset that he had wanted the play to work on the e para-o para bibhed, the us and them narrative.

I ask Guha too what in his opinion the sex workers got out of Jhoraphuler Roopkatha. First, he falls silent. Next, he repeats like Alexa: “What they got out of the whole endeavour.” Thereafter, he proceeds to answer: “I have no idea. But I got a lot out of it all.”

Clearly, the poet is just a touchstone here, the heroes, they are in plenty.

Ever thought of visiting a broom museum?