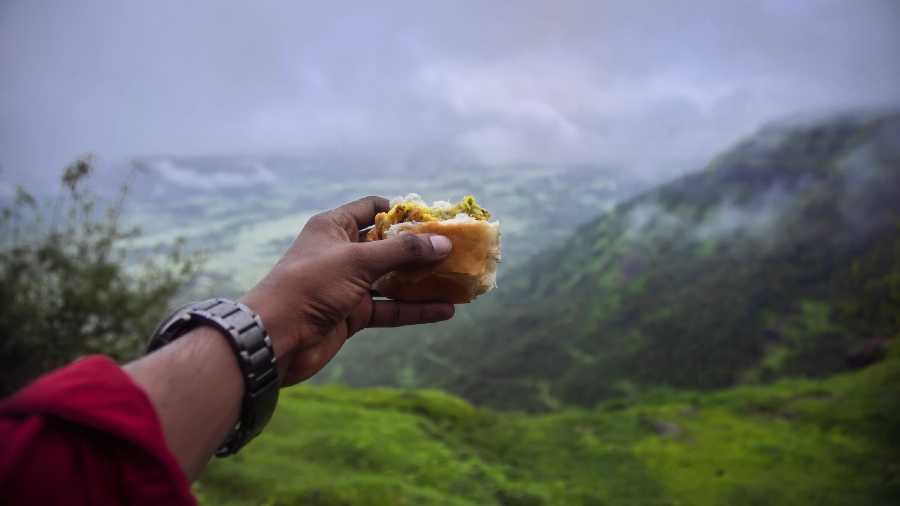 As I sit at my computer writing this piece and glance at the newspaper lying nearby, a headline is that of the city’s preparations for the oncoming monsoons and that the next few days might bring a substantial amount of rains to the city. While this piece of news might or might not evoke any reaction among most people, some might react to it by trying and tweaking their plans for the declared period, while some might want to prepare for it by extra procurements. To my mind, however, the best way to prepare for a day or two of a rainy weekend, during the monsoons, is to start planning what to cook and eat. Perhaps even drink, but I will leave that discussion for another time.

Growing up, monsoons meant dressing up in our favourite colourful raincoats, which, for the most part, even today, are more cosmetic than purposeful, cancelled schooldays which we all relished, parents staying at home and great food being cooked following almost a preset menu that kind of matched up, somehow. While I was wondering as to why most countries do not really have any specific ‘rainy day’ cuisine, and why India has one, I had to find more about monsoons. It turns out that while it rains across the world and in all the countries, only certain countries have a pronounced ‘rainy season’ or the monsoons. The summer monsoon, typically from June to early September, is mainly active in South East Asia.

What do we eat during the rains?

While thinking of monsoon foods, the first thoughts that come to everyone’s mind is that of piping hot cups of ‘masala chai’ and ‘pakodas’ or other staples such as ‘khichri’ or ‘momos’. It is often an ignored fact that India being such a vast country with different cuisines and cultures has rather varied culinary traditions regarding the different seasons, including monsoons.

In India, as elsewhere in the world, the food traditions and habits have always followed the season since the food availability varies greatly during seasons and different staple foods are grown in different seasons. I had written a column titled ‘C’mon, be seasonable now’ a few months back where I had discussed at great length the importance of eating seasonal foods and also the historical developments that led us to eat certain kinds of foods at a certain time of the year.

In that context, however, monsoons are slightly different since there are not a lot of culinary ingredients that grow or are harvested naturally during the rains. While owing to the developments in agricultural practices and storage, most fresh produce are now available to us throughout the year, especially in big cities, monsoons do indeed bring out the best of extremely seasonal foraged produce such as different kinds of herbs, greens and mushrooms that are used culinarily in various parts of the country. Greens such as the fiddlehead fern, dhekia saag in Assamese cuisine, or the colocasia leaves known locally as kochu pata, are some delicacies that are commonly cooked during the rainy season. Another common food item available in the wild during the monsoons is the mushroom, which is foraged and used in various cuisines, especially the ones of Konkan and the Northeast.

Some of the best memories of our patrons at Flurys is of the monsoon months, enjoying a piping hot cup of our seductively mellow Darjeeling tea, along with specially curated finger foods and watching the alluring drizzle through the large French windows, and seeing the city in an entirely different perspective. This year, too, we hope to be able to have an exciting monsoon menu before the season leaves, but owing to the pandemic, we are keeping our fingers crossed. While almost all restaurants hold special food festivals during the monsoon season, including us at Flurys, where we offer mostly shareable and flavoursome titbits of foods savoured with hot beverages, many regions in India celebrate various religious festivals during the monsoons.

Most of these festivals are characterised by special food items that are made especially for the occasion. Whether it is the feast of the Virgin Mary celebrated in early September, primarily in western India, the waterbody festival of Adi Perukku in south India, or the Janmashtami of north India, all these festivals are represented by food items that are typical to the monsoon months. In many Bengali households, another monsoon festival, Ranna Pujo, is observed in the month of Bhadra (early September) to appease the snake Goddess Manasa to seek protection from the snakes during the wet monsoon months. While no food is cooked on the day of the festival itself, a big ritualistic food spread is served the next day, which includes panta bhaat (cooked, overnight fermented rice), fried vegetables, ash gourd and the Bengali monsoon favourite — the venerable fish ilish. In Kerala, the popular festival of Onam Sadhya is observed where a grand vegetarian spread is served as a highlight of the observance and seasonal ingredients such as yam, pumpkin and coconut are used extensively.

While it is easy to overindulge with the sultry, drizzly weather on one’s side, it is also imperative that certain precautions be taken, especially during the monsoon months, with regards to food consumption. First off is obviously to regulate the amount of deep-fried food since rains and fried foods are almost synonymous for most of us. Also, greater care should be taken to wash fresh vegetables well since these can carry germs and bacteria. It is also suggested by some to lower the consumption of dairy and fresh vegetables during the monsoon season, but, obviously, these are better left to the judgement of consumers. Many communities in the country also refrain from eating fish and seafood in the season, mostly due to ethical reasons. Eating at open food outlets and hawkers, etc., is also discouraged during the monsoons for obvious reasons. 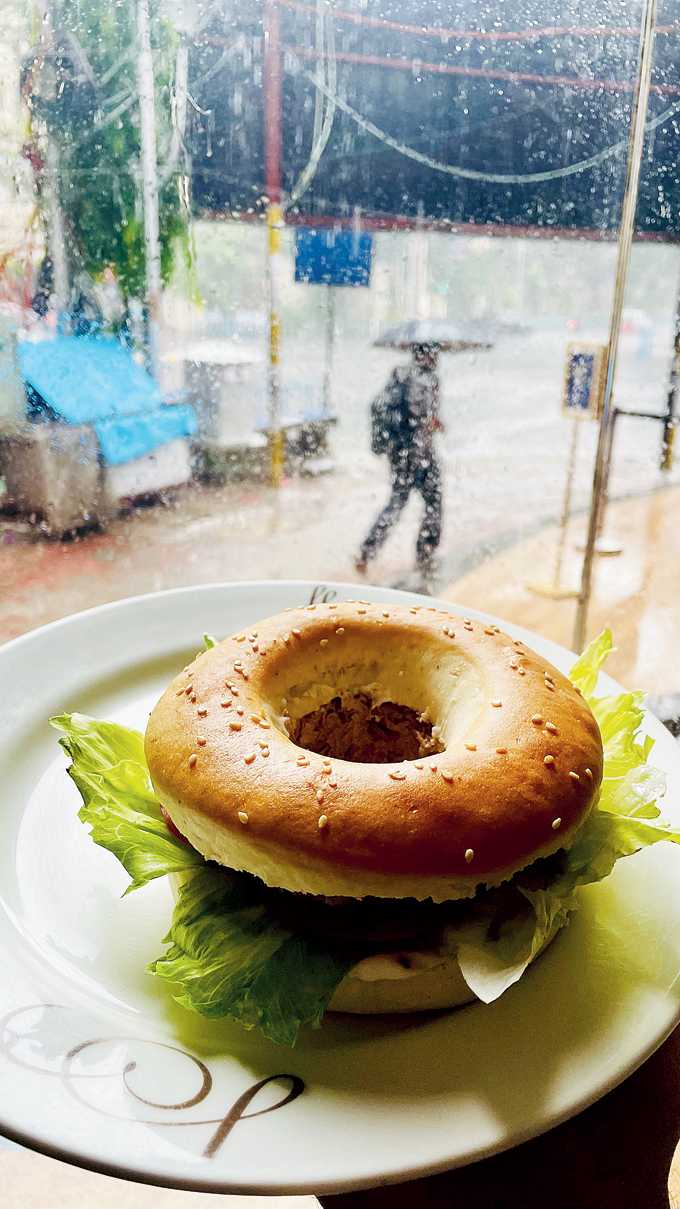 This dish is from our upcoming new menu and is a great all-day snack/ meal that can be made ready quickly and will be loved by all. We make our own bagels here at Flurys, but you can get any that are available. The filling of this bagel can be suited to your preference. Here, I am doing a classic combination of teriyaki chicken with cream cheese, just spicy enough and perfect for a wet monsoon afternoon.

• For the teriyaki sauce:

• For the cream cheese dressing:

• Salt, pepper, oregano: A pinch each

• Split and toast the bagel, then spread generously with butter.

• Poach the chicken thighs in water with salt, peppercorns and bay leaf then shred the meat by hand, boneless chicken thighs can also be used but bone-in has better flavour.

• For the teriyaki sauce:

• Mix all together and cook on low heat until well incorporated and thickened. This teriyaki sauce can be stored air-tight for several weeks in a refrigerator.

• For the cream cheese dressing:

• Mix the ingredients well and reserve.

• Mix the teriyaki sauce with the pulled chicken and load on top of the salad; if you like, a slice of grilled pineapple can be placed on top. Cover with the other bagel half. Serve with freshly fried French fries, don’t skimp, enjoy it the way it’s meant to be enjoyed.

The most crackilicious triple-cooked Chicken Chicharrones 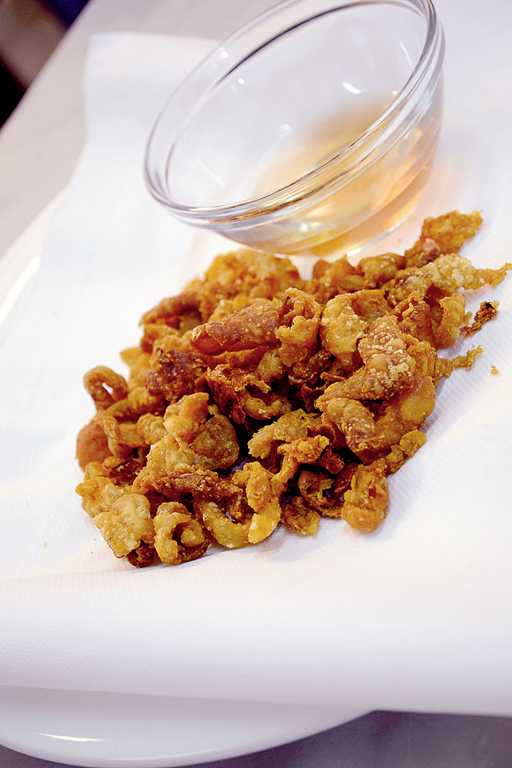 While monsoons are definitely my favourite time of the year and I personally experiment a lot with food during the season, here I am giving out the recipe of one of the dishes that I had in a small cafe in Thailand, during heavy rains. Incidentally, the first portion of the dish was served complimentary and I liked it so much that I ended up ordering many of those during my stay, most of which was marred with unusually heavy rains, atypical for the time of the year. I really enjoyed the dish and had the opportunity to learn the recipe and the somewhat elaborate process from the chef himself, who was Spanish and took great pride in the dish.

The dish is called ‘Chicharron’ and is basically fried or baked skin of animals and birds. In my case, it was the chicken chicharron, which was savoury, crunchy and delicious. I know it sounds kind of repulsive at the first thought of a cooked skin dish, but trust me, it is a dish which is easy to prepare, is full of nutrients and is a tasty and crispy snack for any time of the day, especially during the monsoons with your favourite beverage — hot or cold, hard or not-so-hard. To the ones for whom this matters, this dish is also ‘Keto’ in nature, which means that it has large amounts of proteins and good fats while having zero carbohydrates.

To make chicharrones, you need to get chicken skin. In India, we normally eat chicken without skin for our curries, but roast chicken is always made with ‘skin-on chicken’. In fact, most of the pleasure of eating a well-cooked roast chicken is in the crisp, crackly skin which complements the moist meat inside. It’s same for roast pork or duck where the crackling or the skin is the most prized part of the dish.

You can either get one of those chickens dressed specially for roast, remove the skin and use it or ask your butcher for it. These chicken chicharrones can be eaten as these are with a sprinkling of herbs, with your favourite dips, or served as a topping in salads or soups. Here is the simple recipe.

• Combine the chicken skin, vinegar, water, garlic, peppercorn and salt in a pot and cook until skin renders the fats and are softened. This should take 15-20 minutes on low heat.

• Remove the chicken skin from the pot and let it cool in an airy environment, preferably under the fan, so that it dries out a little bit.

• Cut into small bite-sized pieces and bake in a moderately hot oven, arranged in a single layer, at 180°C for around 60 minutes till dry.

• One way to make this dish is to continue to roast the chicken skin till crispy, but to add that extra bit of scrumptiousness, we will deep-fry these, just the way it is traditionally done in Spain, where this dish originates.

• Heat oil in a large pot and deep-fry the chicken skin in batches. These don’t absorb much oil at all and take literally seconds to fry and puff up. A good test is to take out the skins when they are golden brown and are floating in oil.

• Remove from the oil with a slotted spoon and out into absorbent paper.

• Once slightly cool, sprinkle with your favourite powdered spices such as paprika, oregano, chilli flakes or chaat masala, a touch of salt, and these are good to go.

• These chicharrones can be stored in air-tight boxes in a cool place for up to a week.

• It is traditional to serve these chicharrones with a vinegar dip, which is made by mixing salt, sugar, pepper powder and crushed garlic in wine or malt vinegar. 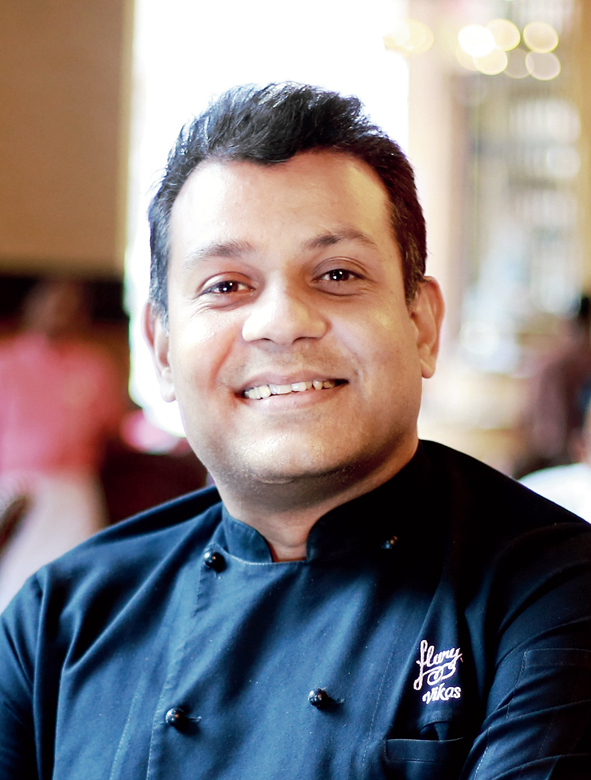