Inspired by her Bengali-Afghan heritage, Mallika is back with her second cookbook, Masala 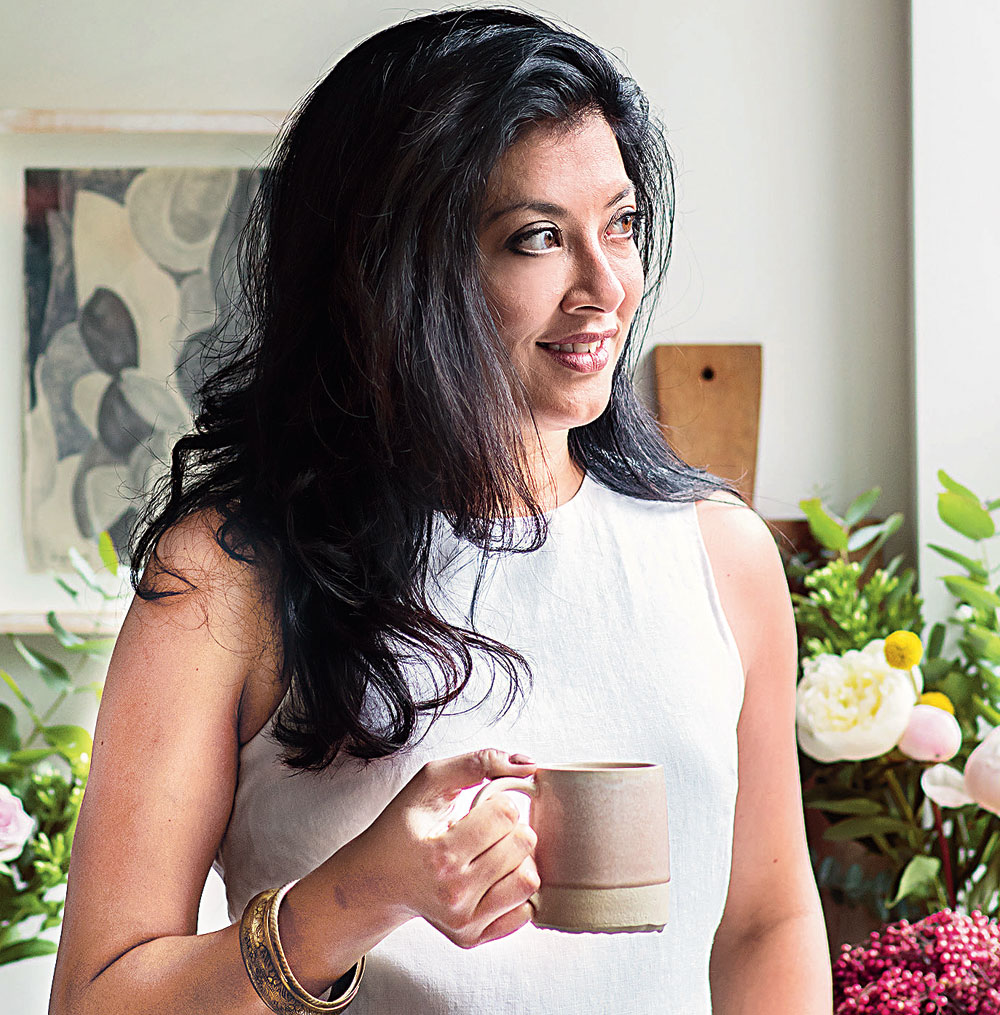 Coated in turmeric and chilli and simmered in a gently spiced curry, this is a very simple way to enjoy fish with the lightest of spices. Fish in India comes from both the fresh waters of its lakes and rivers and from the sea. Although foreign varieties such as basa are gaining popularity in restaurants and supermarkets, the morning trip to the fish market for the catch of the day remains a firm tradition in the fish-loving states. In Bengal, for instance, this is traditionally a job for the man of the house, who prides himself on his masterful bargaining with the sellers. Serve Macchli Curry with freshly steamed rice.

At home, what kind of cooking would we find in your kitchen?

I often use my own cookbook, so that’s very much the kind of Indian food you would eat if you came to my home. I love other cuisines, and so Indian dishes take pride of place alongside Chinese, Japanese, Persian, Italian and much more. My family loves variety; the kids especially are gourmet babies, with a very wide-ranging palate and love for food and cooking. So it’s a mixed bag. The food is always wholesome, well balanced and simply cooked.

What kind of influence does your husband’s half-Peruvian and half-British heritage have on your cooking?

I was quite lucky that Peruvians like flavour and lots of chillies! I never had to tone down our spicier dishes for him... We met at university in London through Gujarati friends and the rest, as they say, is history!

How much of Indian culture are your kids exposed to?

They call themselves half-Indian and love dressing up in their festive Indian clothes and eating Indian food. I often make dosas and chillas at home for weekend breakfast, which they eat before you can wink. And they love going on holiday to India. Sadly, I haven’t been great at teaching them Hindi or Bengali. Still they are only small so there is hope!

She’s a communications professional with a busy life in London, with her two kids and British-Peruvian husband. She loves to cook and wrote her first recipe book, Miss Masala: Real Indian Cooking for Busy Living, around eight years ago. Mallika Basu — former Bengal chief minister Jyoti Basu’s granddaughter — has more kitchen wisdom and scrumptious meals to share in her second cookbook, Masala. Sprinkled with memories of Sunday lunches with her politician grandfather and secret recipes from her north Indian maternal grandmother, Mallika has whipped up a delicious hardback of ‘slow feasts’, ‘classic curries’, ‘sweet treats’, ‘quick fixes’ and more. We caught up with her on an email chat.

What inspired you to write a cookbook, as there are several on Indian cuisine already?

This is a very personal book that was inspired by my own experience of trying to fit Indian cooking into a busy family, social and professional life.

I use a lot of cookbooks and found myself finding ways to simplify the recipes in them and the recipe instructions being given to me by my family. A lot of Indian recipes are based on nostalgia and age-old traditions, but we don’t live the way our parents and grandparents did. Even my mother (theatre veteran Dolly Basu) and her friends use great little shortcuts to make food simpler to cook and more wholesome.

I found myself reaching for gadgets, innovative food products/ingredients, and easy cheats that don’t compromise on flavour. I saw a gap in the market for an Indian cookbook that reflects the way we live now — for busy people, who don’t have much help in the kitchen and want to get wholesome, delicious food on the table for friends and family.

The design aesthetic of contemporary India was also important for me to reflect. The Western view of India is all elephants and paisley, despite the beautiful, minimalist Indian design I have been enjoying. We were keen to capture the texture and colours of handloom, architecture and nature in the look and feel of the book.

How did you go about curating the dishes?

I started with mealtime moments. We Indians love our breakfast, and there is a huge trend of lazy brunches, so that had to be a chapter. I also love entertaining, so feasts needed to feature. Then I included family favourites from my homes in Calcutta and London. A lot of recipes from Delhi feature, where my mum is from and where I worked briefly. Then there are several Bengali recipes. But importantly, we were a cosmopolitan bunch and recipes from other communities featured too. I am very influenced by Gujarati food, for instance, and I travelled extensively in Kerala, Telangana, Andhra Pradesh and even researched Calcutta food. So recipes from there feature too.

Masala has many anecdotes from your childhood, involving your grandfather Jyoti Basu. What was your relationship with him like?

It was like any other relationship between a doting grandfather and his besotted granddaughter. Dadu called me his crown princess and was keenly interested in my academic and other achievements. When I participated in a beauty contest and came last, it didn’t stop him from driving his convoy straight to our home and chanting “beauty queen, beauty queen” as he came up the stairs to see me. He looked so glum in photos but he sprung to life and smiles when he was around us. When I got married, his one concern was that I would give up my career. So I think he’d be proud that I have not one but three full-blown ones, including motherhood!

Any food memory from your childhood that comes to mind?

Sunday lunch was a big tradition at our home (in Salt Lake). I always remember lazy afternoons with lilting Bollywood tunes, vodka cocktails for the grown-ups, my dad (Chandan Basu) stirring slowly and the kids filling up on chanachur while lunch took ages to cook. I also have not-so-fond memories of driving my mother crazy at mealtimes. I was a very fussy eater and skinny child. My poor mother oversaw the most amazing food, which I would reject without even trying. I did eventually grow out of it though, as is probably evident!

In the book, you mention that you have been influenced by your maternal grandmother a lot...

Nani is a proper matriarch with Afghan blood in her. She was actively involved in our parenting and a strong influence on food, culture and others. I used to travel with her to Delhi for my winter holidays and have the best time. She gave up non-vegetarian food when she lost her husband, but still cooked excellent chicken curry. Thanks to her, I enjoyed the best of Delhi home cooking — rajma chawal, kadhi pakora, gajar methi, and parathas stuffed with absolutely everything.

I called her when I was writing Masala and we had an awkward conversation, as she is hard of hearing, until I asked her for her recipe of nimbu ka achaar. She sprung to life and after much testing, the recipe has now been perfected for modern kitchens and is in my book.To be honest, I had all manner of busy people in mind. A lot of my followers are young families, professionals without kids and silver surfers who are enjoying their kitchens and cooking in a new way. I live in London, so some of the recipes do need to be adapted for international kitchens but it’s never complicated and nothing an instinctive regular cook can’t manage. I know a lot of Indians who move away from home to study, or to get married or for work. They buy my book because they find the recipes are so doable and always taste right.

In the age of quick tutorial videos, do you see a cookbook being relevant?

Absolutely. Quick tutorial videos are great, but there is only so much you can cram into a short video. Cookbooks are increasingly being bought for longevity, because they offer something over and beyond just recipes. A video tutorial can never replace that.

Is cooking a passion or is it just a hobby or something more?

All of the above. I find it very relaxing and often cook after a long day to unwind. But more than that I am passionate about addressing misperceptions about Indian cooking that exist. It’s not as complicated, difficult and time consuming as people think. That’s what got me writing about food. All you need is know-how, great recipes and a fantastic cookbook.

How do you make time for this alongside a career in communications?

They say if you want something done, give it to a busy person! But seriously, I have been very blessed with the support of my husband, my family and friends. I also gave up a full-time role in communications in favour of consulting, so I now have a portfolio career that allows me the flexibility of enjoying my day job and indulging my passion. Hopefully, I am living proof of my own unique difference — that I am a busy home cook writing delicious recipes that work for other busy home cooks.

What is next in the cooking space for you?

I am still busy promoting the book and it is such a labour of love that I am trying to slow down and savour every minute. Watch this space for my next venture!