Food for thought: Dishes that make a Bengali meal special

It’s been a few weeks since Poila Baisakh but one can’t forget the spread restaurants continue to serve, from bhetki roll to improvised traditional sweets 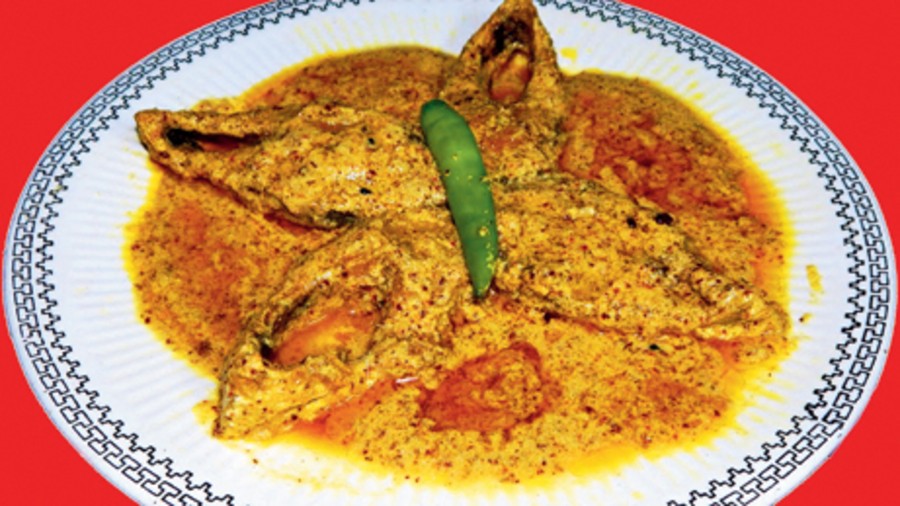 We are still in the first month of the Bengali new year. Since most of us live by the Gregorian calendar, we forget to count the days/months in the Bengali system. The first day of a Bengali new year is an emotion… an emotion that’s celebrated wearing notun jama. Parents insist that no matter how a person is, one must wear something new.

It’s been a few weeks since Poila Baisakh but one can’t forget the mouthwatering spread restaurants continue to serve, from bhetki roll and pomfret paturi to improvised traditional sweets, like baked malai rosogolla. But amiss is yesteryear grandma’s amazing culinary skills which we used to enjoy during our childhood.

You must start with the Bengali Shukto, a luscious mixture that makes radishes and bitter gourd taste amazing. It’s a great delicacy for those who don’t eat their share of vegetables often; it’s known to cleanse your palate and keep you healthy with its medicinal values. Generally, the course progresses with a thrust from lighter to richer dishes and the progression does justice to a vast array of local and seasonal vegetables.

Next, Aloo Posto, a sweet and simple classic Bengali dish made with posto or poppy seeds. Poppy seeds are used to create this luscious white gravy recipe made from potatoes, without which any Bengali lunch seems unfinished.

Kanchkolar Kofta represents a unique combination of boiled raw banana and crumbled chhena (soft cottage cheese) as dumplings or kofta. Many people suggest Kanchkolar Kofta as a perfect dish to serve guests. This kofta curry is a great alternative to the conventional Malai Kofta.

Next, Ilish Maachher Matha Diye Moong Dal. When moong dal is roasted, it gives out a natural flavour, and if you mix the head of the hilsa fish, it makes the dal tastier than caviar. No, I’m not exaggerating; you’ve got to try it to find out just how awesome it is.

Shorse Bata Diye Maachher Jhal after dal. This is not just a combination of fish and mustard paste, but a divine taste that you will remember days after enjoying it. Even former US President Barack Obama was served this signature fish curry on his visit to India. The good thing is that you may use any sweet water fish for this preparation.

But undoubtedly, the pride of place has to go Kosha Mangsho, a distinctive Bengali-style mutton curry. While mangsho stands for mutton, kosha means slow-cooked or fried for a long time with ground and whole spices over low heat. In a Bengali household, the very mention of mutton inevitably brings on excitement, because, unlike chicken or fish, Kosha Mangsho is mostly cooked only on special occasions, Sundays or during festivals.

How can we miss Daab Chingri. Be it jumbo prawns or shrimps, we Calcuttans love to include them in our cooking. A curry cooked with chingri maachh, mustard and coconut served inside a green coconut gives you the taste of the tender coconut and cream of mustard. It is generally a part of the Bengali menu, included especially on special occasions and festivals.

Kochi Pathar Jhol adds more meat to the menu. Bengalis love to have lamb on their plates rather than chicken. But with time, Kochi Pathar Jhol has somewhat disappeared because it’s hard to find high-quality meat from a small goat. It is believed that “smaller the goat, tastier and softer the curry” and that’s why this lamb curry from Bengal is known as Kochi Pathar Jhol.

Kacha Aamer Chutney and papad make for a delicious combination. Bengal also has an affinity for making amazing dishes with ingredients that others don’t seem fit or cannot understand. An example is papad dipped into Kacha Aamer Chutney (unripe mango jelly), which has an intoxicating smell of the green mango and is also sweet and spicy.

Finally, Bhapa Doi or Baked Yoghurt, which is hung curd or Greek yogurt blended with milk and condensed milk baked in a water bath in the oven or steamed on stove top. It has a place of pride in many famous sweet shops around the city.

For Bengali traders and shop owners, Poila Baisakh is haal khata time — the auspicious day to make the first entry on a ledger. From visiting a sari shop to a jewellery store, Bengalis never fail to collect boxes of sweets and have a few glasses of sherbet.

Times are difficult but let’s be hopeful and look forward to happier times. The days of phulko luchi, puli pithaa and pati saapta will be there, just like our grandmothers prepared them. The stretch of road we are currently on is winding and full of stumbling blocks but let’s hope for the best.

To marinate the mutton, bring together garlic, ginger and onions. Grind them together in a mixer to make a smooth paste. Wash and clean the mutton. Add to it the ingredients for the marinade — yoghurt, turmeric powder, coriander powder, red pepper powder, some mustard oil, and half of the ginger/ garlic/ onion paste. Let it rest for about two hours in the refrigerator.

Heat two tbsp mustard oil in a kadai. Fry the potatoes till they turn golden brown. Keep them aside.

To cook the mutton, heat the remaining mustard oil in the kadai. Temper it with the black pepper, cinnamon stick, bay leaves, cloves, cardamom and turmeric. Also, add sugar to it.

Add the remaining onion paste and fry for about five minutes. The oil will start separating from the mixture. Now add the marinated mutton. Cook on low flame for about half an hour.

Add two cups of water (depending on the gravy you want) and cover the kadai. Let the mutton cook for at least an hour, till it becomes soft and succulent. All this while ensuring that the flame is at its lowest.

Add the fried potatoes and garam masala and give it good stir. Let it cool for some time and then sprinkle freshly chopped coriander leaves. Serve hot with either steamed rice or parathas.

Soak poppy seed in plain water for 30 minutes. Make a thick paste in the food processor. Add one green chilli while making the paste (as per taste). Add a little salt to the poppy seed paste.

Wash potatoes thoroughly and remove the skin. Cut into small cubes and soak it in water (it’s an important step). Heat three tbsp oil in a heavy pan. Temper the oil with onion seed or kalo jeera. Add potato cubes; fry on a medium flame for three-four minutes until potatoes soften a bit. Add a little salt and give it a mix and add green chillies. Cook for two minutes before adding the poppy seed paste. Cook till the raw smell of the paste has completely disappeared. Add a cup of water to cover the potatoes and cover the pan with a lid. Cook until the potatoes are soft and adjust water if required. Adjust the gravy according to your preference. Once done add one tbsp mustard oil and mix. Serve hot with steamed rice.

Kanchkolar Kofta
Sourced by the correspondent

Bhetki Paturi
Sourced by the correspondent

Bhapa Doi
Sourced by the correspondent

Satnam Singh Ahluwalia is the food curator of Options Unlimited, Calcutta. He can be reached at satnam.kolkata@gmail.com