Celebrity chef adds three recipes to the sourdough series as part of his column — ‘chocolate, chillies & other culinary vulgarities’ 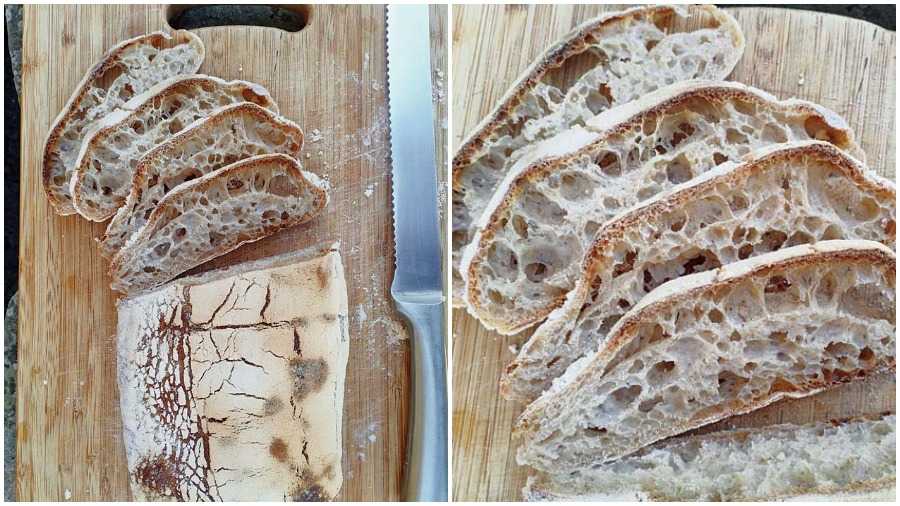 After covering the basics in last week’s column, which included making simple white loaf and wholewheat bread, here’s moving on to something a little more challenging.

Last year I was making a loaf pretty much every day. This one became a firm favourite and those raisins with all of that natural sugar, really makes the dough ferment rapidly and you end up with a really nice aerated open texture.

To start, make the leaven the night before, following the same, recipe and method as followed in the recipes published on July 13 in the first sourdough series.

• In the morning, combine your leaven with water, olive oil, raisins, a little fresh rosemary, or dried, if you can’t get it.

• Then add the strong white bread flour, strong wholewheat bread flour and salt. Knead for 10 minutes until smooth and elastic. This should be a wet, floppy dough!

• Pour into a well-oiled bowl and cover with cling film. Leave to prove for up to four hours at room temperature or until doubled in size.

• Now to begin a series of folds, lift the dough from the edge, pull up, over and then release it.

• Repeat so you do a full turn of the bowl twice, or eight folds. It’s probably best you read this a couple of times before you start. Just so you understand.

• Rest for one hour and repeat the folding process once more.

• Then using a pastry scraper to help move the dough, shape the dough into 2x8 inch squares and one at a time, fold the dough in from each side, as if folding a booklet.

• Flip over, then pick up the roll and place each onto separate well-floured sheets of baking paper. The roll will be very soft, so oil or flour your hands well.

• Allow to rest for another 30 minutes, covered with a floured tea towel. It will most probably spread out so make sure there is plenty of space between the loaves.

• Preheat your oven to 220°C, with a baking sheet or tile in the centre of the oven. Then slide each of the loaves along with the baking paper beneath them, on to the hot baking sheet.

• Bake for 35 to 40 minutes, until the crust is golden and the loaves sound hollow when tapped on the base.

• Move to a wire rack and cool for an hour before slicing. 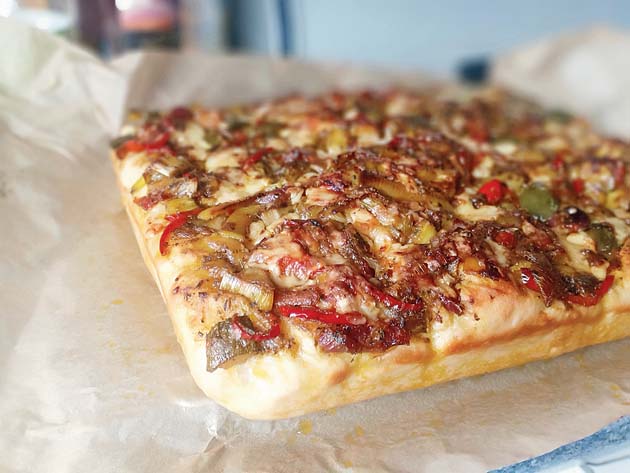 This recipe will make a good-sized tray of focaccia and trust me it won’t last long. To start, the night before, make your leaven, as with the previous recipes.

• Red and green capsicum, 1 each

• Knead for 10 minutes. The dough should be slightly sticky.

• Sprinkle the work surface with flour and tip the dough on to it, scraping around the sides of the bowl.

• Knead for five to 10 minutes until your dough is soft. Put the dough into a clean bowl, cover with a tea towel and leave to prove for two to four hours or until doubled in size.

• In the meantime, you can make the topping. For which, pour in olive oil in a hot pan and fry the onion, sliced capsicum, chopped garlic, ginger, cumin seeds and chilli flakes until golden brown. Then set aside to cool.

• Next, begin the series of folds. Lift the dough from the edge, pull up, over and then release it. Turn the bowl 90° and do the same again.

• Repeat so you do a full turn of the bowl twice, or eight folds. Rest for one hour and repeat the folding process once more.

• Tip the dough into it and stretch to fill the tin. Then cover with a tea towel and leave to prove for another one to two hours or to double in size.

• Preheat your oven to 180°C and sprinkle your topping over the top of your dough.

• With a good sprinkle of chopped coriander and drizzle of olive oil, press your fingers into the dough to make dimples and sprinkle over some flaky or crushed rock salt.

• Bake for 30 to 40 minutes or until golden. Whilst the bread is still hot, drizzle over more olive oil and remove from the tray onto a wire rack to cool. 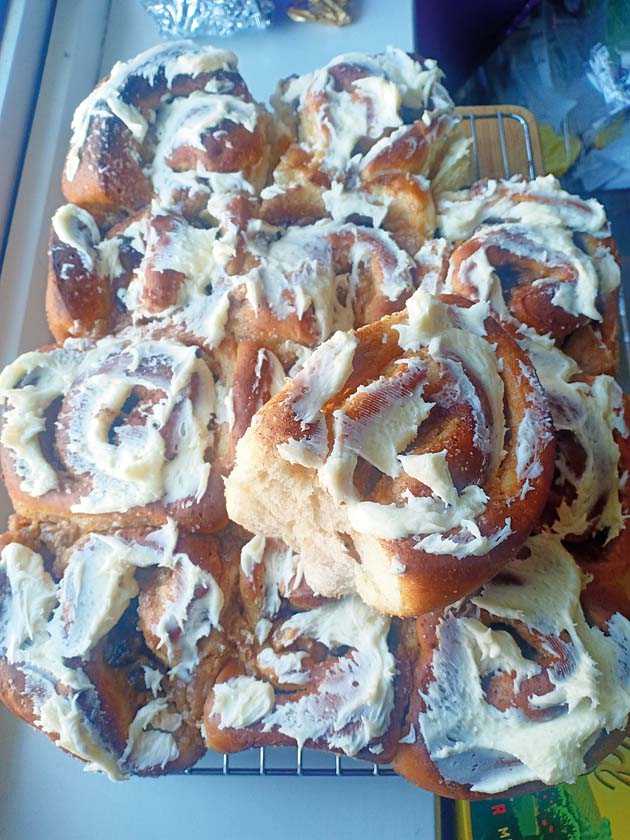 Lastly, something sweet and another thing that’s been trending for the past couple of years. This recipe with the addition of lots of food for the yeast, milk, eggs, sugar, will be a really active dough. But to start and for one last time, the night before, make your leaven, the same as with the previous recipes.

• Into a bowl with your leaven, add lightly warmed milk, strong bread flour, salt, sugar, eggs, butter and a few drops of vanilla extract before making a soft dough.

• Add a little extra milk if necessary and kneaded for 10 minutes until it makes for a smooth ball.

• Place it into a clean bowl, covered with cling film and let it sit at room temperature to double in size, for about one to three hours.

• Meanwhile, for the filling, mix together softened butter, in a bowl, with castor sugar and cinnamon. This should be smooth and spreadable.

• Next, knock back your dough by giving it another five minutes kneading.

• Allow to rest for five minutes then roll out to around 24-inches length and 18-inch width and 1cm thick.

• Spread the cinnamon-sugar-butter evenly over the dough with a palette knife. With the longest edge closest to you, roll the dough up into a cylinder. Cut into 18 even slices.

• Place each slice onto a flattened out paper cupcake case on a baking tray into a greased muffin tin or as I have done here, placing them a little distance apart on a baking tray which I had buttered and floured.

• Cover once more until doubled in size and and bake in a preheated 170°C and baked for 30 to 40 minutes, before removing from the tray to a wire rack to cool.

• Once cool, I spread vanilla butter cream on top. Made with equal quantities of soft butter and icing sugar, creamed or beaten together with a few drops of vanilla extract until light and creamy. 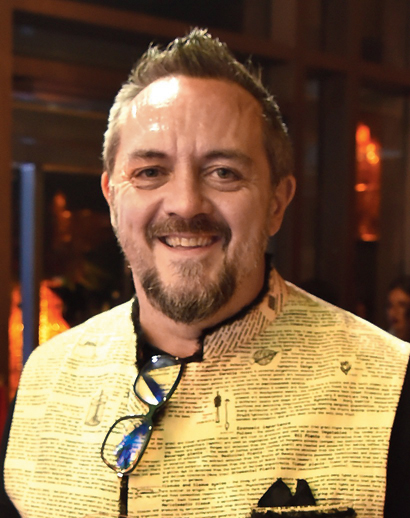