Days of doom in vivid imagery 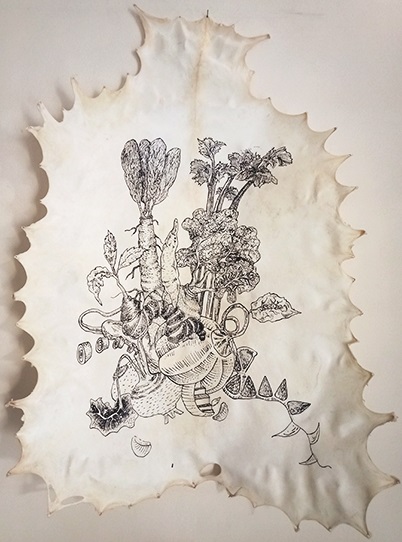 The title of Delhi-based Shrine Empire’s online show, Speculations on a New World Order, curated by Anushka Rajendran (April 6-May 20) gives adequate indication that it is all about these unprecedented times of unrelieved doom and gloom. Photography seems to be the favourite medium of many of the 10 participants, divergent though their practices are, although some of the most interesting works are by Bhagwati Prasad, who relies on traditional skills used with imagination. His practice — and that includes the politically resonant materials he uses — is radically different from that of the other participants. Bhagwati uses goatskin as his canvas and a bamboo stylus to conjure up complex, detailed, peculiar, yet beautiful, intricately drawn images of Begumpura, a land without sorrow where all are equal, as imagined by the 15th-century saint, Ravidas.

At the opposite pole are Chandan Gomes’s disturbing photographs. The unflinching gaze of his camera documents “violence, mental illness, memory loss and dementia”, old age and vulnerability. Yet, each “haiku”, as Gomes calls these fragments, is immersed in a deep sense of serenity that would not have been possible unless he empathized with his “subjects”.

The disquieting effect of Anupam Roy’s dark overlapping images is indicative of the all-pervasive paranoia and anxiety stemming from the erasure of identity as thousands of migrant workers make a desperate effort to return home, and Covid-19 victims turn into statistics. Fear of the unknown deepens in Anoli Perera’s video as the virus can cock a snook at the most sophisticated surveillance gadgets. Omar Wasim and Saira Sheikh’s classic black-and-white photographs of abandoned construction projects are evidence of human greed fuelling the spoilation of nature.

The very ordinariness of Sharbendu De’s futuristic scenario lends credence to it. Human beings have turned into goldfish living under a blue-tinted glass cover where they can breathe oxygen, a life-giver which has turned into a scarce commodity. The only participant whose work, a video, has a spark of humour is Katyayani Gargi. It shows a cross-section of an apartment block with the inhabitants going about their business, unaware of the eyes scrutinizing every move.