Advertisement
Home / Culture / Arts / Together in times of trouble

Together in times of trouble

Apart from giving a head start to short-length theatre productions based on literary works, this event also sought to acknowledge contributions to Bengali theatre 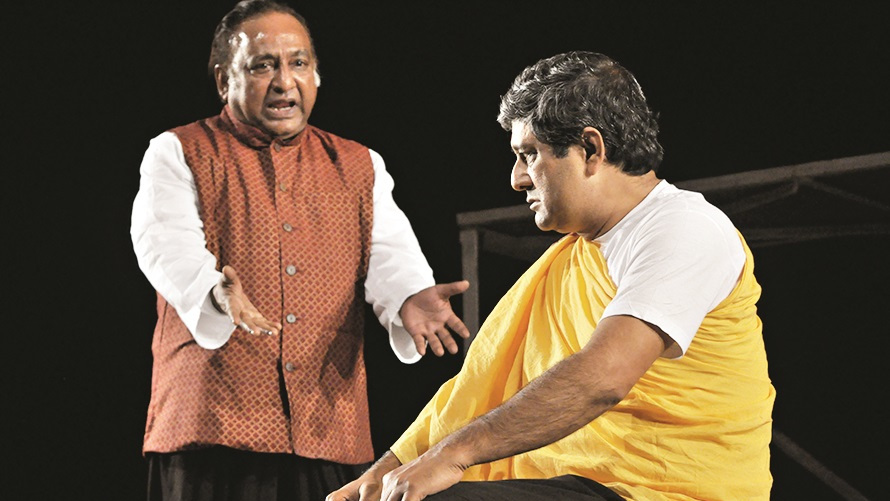 Natyaswapnakalpa, the premier Bengali theatre event to mark the turning of a year in the Gregorian calendar, has come a long way since its inception in 1999-2000. Apart from giving a head start to short-length theatre productions based on literary works, this Anya Theatre event devised means to acknowledge significant contributions to Bengali theatre, cutting across borders, and hosted many stimulating intellectual discourses. The pandemic did manage to take some sheen off the Natyaswapnakalpa celebrations this time. However, the camaraderie that marks the event motivated Swapnasandhani and Prachyo to join Anya Theatre in hosting an evening of new theatre works at the Academy of Fine Arts on December 31.

Anya Theatre’s Lock Downer Galpa was a tongue-in-cheek take on the early days of lockdown in India. Bibhash Chakraborty’s ability to work on dark humour within a domestic situation surfaced as an aged couple took up the challenge of maintaining social distancing norms in their living room after a community health worker arrived in PPE gear. The director, Debashis Ray, approached the production in a relaxed manner, let the actors explore the drama between the lines, and underlined the comic patterns in situations like the parting of the bed vertically from the middle. The play gradually moved to a romantic love story set in Bhagalpur, with the song, “Main na bhulunga”, emerging as a leitmotif. Had the actors kept the tempo going, Lock Downer Galpa would have sustained interest till the end.

Prachyo renewed its tryst with Girish Karnad’s The Dreams of Tipu Sultan with Azadi (picture). One may remember their Tipur Swapna premiered seven years back. Prachyo’s director, Biplab Bandyopadhyay, let young Buddhadeb Das work freely with Ratan Kumar Das’s fresh adaptation of the Karnad script. With a multi-talented team at hand, Das set veterans like Supriya Dutta (playing Tipu) and Bandyopadhyay (playing the Mysore prime minister, Purnaiah) at the centre, did away with the paraphernalia of the proscenium space, and energized the performance arena with pulsating music and movements, maintaining a fine balance between what happened in 1798-99 and what is unfolding now. This ploy largely worked, for Azadi succeeded in attempting a multilingual drama to hit out at neo-liberalism and intolerance from a historical viewpoint. Prachyo’s team effort oozed conviction all through, especially in the reworking of “Ae mere watan ke logon” to underscore the defiant spirit which propelled the martyrs that our nation state celebrates on national occasions. Relieved from the burden of essaying a period hero, Dutta crafted a sturdy portrayal with Bandyopadhyay supporting him as a cunning manoeuvrer. Bhaswati Mukhopadhyay took the stage for a few minutes as Tipu’s dying wife. When she cried out “beetiyaan” at a climactic moment, it set up a bridge to connect the lamentation of the mother of the Hathras gang rape victim. In short, Azadi observes the theatre of conviction in 70 throbbing minutes.

In Ardhek Manush, Swapnasandhani tried to adapt Christopher Marlowe’s Doctor Faustus. Ratan Kumar Das’s experience in handling world classics came in handy. It was also reassuring to see Debshankar Halder pull out all the stops to sketch this role of a lifetime. With Ditipriya Sarkar and Reshmi Sen playing authoritarian agents out to lure the scientist, and a chorus taking over the stage at regular intervals, the temptation scenes were executed like a dream. Given the predilection of the director, Koushik Sen, towards resisting totalitarianism, Swapnasandhani’s latest looks poised for greater heights. Insignificant musical interludes and over-stylized enactments could have been taken care of.