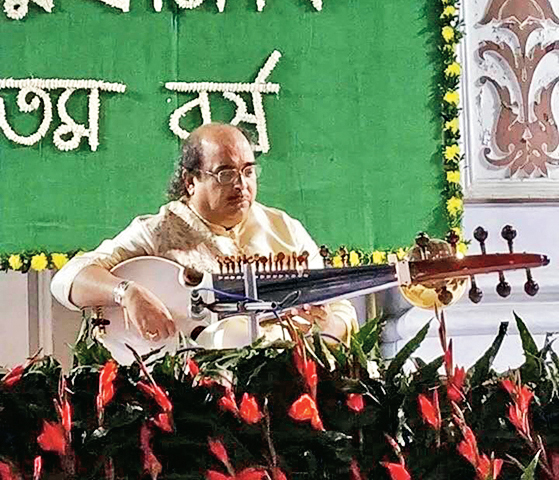 The annual grand musical offering by Ramakrishna Mission Institute of Culture on the occasion of Swami Vivekananda’s birthday was amazing. The day-long festival commenced with a dhrupad by Uday Bhawalkar in Raga Lalit, setting the tone of the programme. His voice was enriched with the finest intricacies in the long alaap in three octaves followed by a dhamar along with Pratap Awadh on the pakhawaj, elevating the essence of the music.

Shubhankar Banerjee’s solo tabla recital in jhamptaal was a rhythmic treat given the ornamentation of the peshkar and the powerful tihais. He completed his cycle with teentaal, ably supported by Hiranmoy Mitra on the harmonium and Sarwar Hussain on the sarengi. The soulful session continued with a sitar recital by Partha Bose, with Swapan Chowdhury on the tabla. Bose’s Raga Jaunpuri ushered in a mood of enchantment with its pace and his Gaurd Sarang was arresting. The Kathak recital by Vishal Krishna along with Shubh Maharaj on the tabla had an attractive start with Shiva stuti followed by a teental. Krishna grabbed attention with his poise, expression, footwork and his exchange with the beats of the tabla.

Pandit Hariprasad Chaurasia — the cynosure of the festival — began with flourish with Raga Madhuwanti. The gats were charming, especially along with the vibrant accompaniment on the tabla by Shubhankar Banerjee. Chaurasia also played a kirtan and a pahadi dhun. The concluding session of the festival added a different flavour with Carnatic vocals by the Malladi brothers. The kritis of Thyagaraja, followed by a presentation of Raga Shankarabharanam created an exceptional mood. They were accompanied by Sadagopan on the violin and K.V. Prasad on the mridangam. The festival had its grand ending with the tabla and pakhawaj duet by Anindya Chattopadhyay and Ravishankar Upadhyay. Both artists showed great skill in laykari, speed and composition. The melodious sarengi of Farooque Latif Khan provided support.

Sutanuti Parishad’s annual festival to celebrate the repertoire of Indian classical music charmed music lovers, especially because of its praiseworthy initiative to showcase young talent in the age group of 9-13 years. The first part of the programme saw promising young performers such as Ananya Ghosh, who performed Raga Vasant. He had a good command over the key phrases of the raga and taans. The performance on the flute by Anirban Roy enchanted the audience by bringing out the quintessential intricacies of Raga Yog. Arijit Bandyopadhyay impressed the audience with his powerful pakhawaj rendition with well-structured bols and difficult rotations.

The second part began with a dhrupad rendition by Uday Bhawalkar in Raga Puriya along with Pratap Awadh on the pakhawaj. Bhawalkar was skillful as usual in the alaap and its cycle. He was more evocative with the ascending pace from the lower octave to the upper. The composition was attractive as well. This was followed by Raga Desh; the length of the performance made it little linear. Tejendra Narayan Majumdar (picture, right) on the sarod stole the show with absorbing music, starting with an alaap in Hem Behag. The technique of the movements in the three octaves was melodious, innovative and touched the listeners with beautiful oscillations of the key notes. In the vilambit gat in Raga Pahadi Jhinjhoti, the unusual strokes and usage of meeds bore testimony to the excellence of the artist; this was followed by drut gats. Majumdar was accompanied by Tanmoy Bose on the tabla. The programme concluded perfectly with tuneful dhuns.