Mass, a solo piece by dancer, Satakshi Nandy, is an intriguing and layered narrative that swells with hope and despair 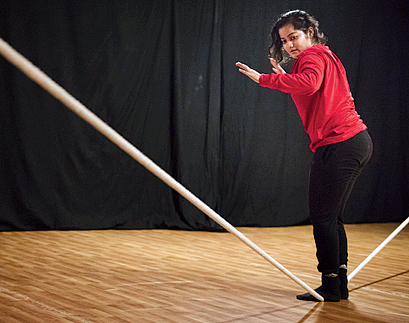 Mass, a solo piece recently performed at the Kolkata Centre for Creativity by dancer, Satakshi Nandy, is an intriguing and layered narrative that swells with hope and despair, with a considerable measure of humour thrown in. Mixing mime, acting, rhythm and dance, the piece makes considerable demands on its performer. Nandy is, in turns, ecstatic, lugubrious, positive, morbid, ridiculous, uncertain, cheerful, querulous, maudlin and a whole lot of other things, as she negotiates a relationship with an object on stage: a rope that divides the performance space diagonally into two. She does so through a series of dizzying, crazy moves.

With the audience sitting on either side of the rope and the performer regarding it as an obstruction, the cord takes on a character of its own. It becomes menacing and benign in parts, as Nandy explores diverse manners of conciliation with it to eventually make peace. In what is purportedly theatre of the absurd, the plot swirls round and round until it pushes back to work towards a goal.

At this point, the rope ceases to be a barrier and becomes associated with the concept of home. It begins to answer fundamental questions such as where we have come from, and where we have had to migrate to in search of identity or in order to cope with loss. A home provides shelter. But, paradoxically, it can also fragment. Just as the rope is an opponent and an oppressor with whom a constant fight must be waged, it binds and provides support. Resolutions need to be sought within these binaries. And so the uncertainty in the relationship with the rope remains.

The choreography in this contemporary dance piece is lively and quick footed. Nandy radiates charm, warmth and a raw infectious energy as she jerks, contorts, twists, leaps, jumps and tumbles in often silly, hilarious and camp ways. Her spirited performance in this work-in-progress piece confirms that she is somebody whose talent is firmly and passionately on the experimental fringe. She probes and discovers, questions and contemplates, conjuring worlds of thought.