Another time, another soldier

50 years of the Bangladesh Liberation War 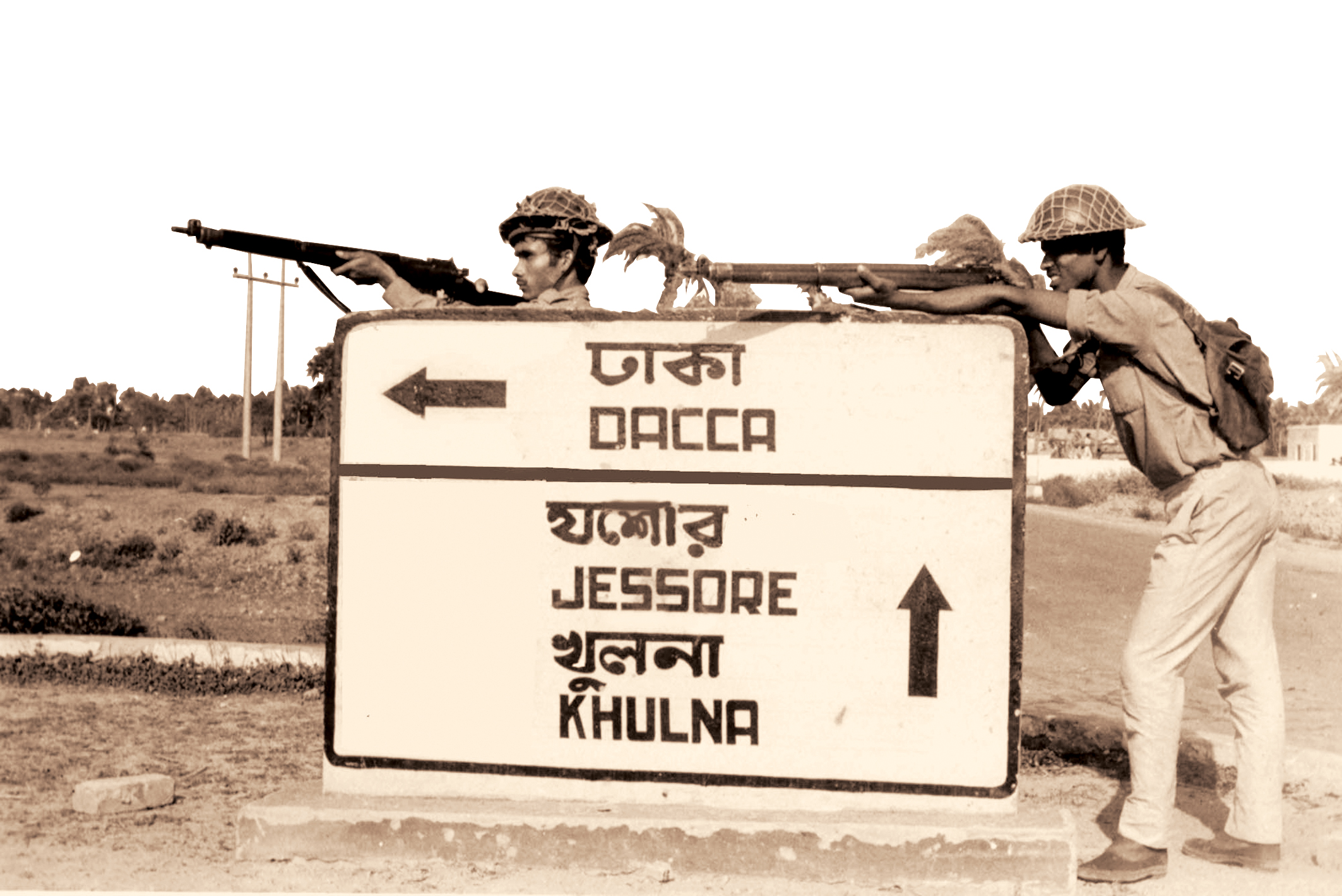 We reproduce here exclusive excerpts from the war diaries of Major Shamsul Arefin; it’s his journey from being a Pakistani Army cadet in Abbottabad to scoring the capture of Khulna as a Mukti Bahini soldier.

Not long after the March 26 crackdown by the [Pakistani] army in East Pakistan, five of us officer cadets slipped out of the Pakistan Military Academy in Abbottabad. From a radio broadcast we had learnt about Sheikh Mujibur Rahman’s arrest in Dacca [now Dhaka]. According to the bulletin, the Pakistani Army was targeting the civilian population back home. We tried to cross over into India. But the Pakistani Army keeps strict vigil on the border. After a couple of failed attempts, I got myself a Karachi-Dacca ticket on a Pakistan International Airlines flight, under an assumed name. The Dacca I landed in was a completely new place. There were burning houses all around. Some days later, I crossed into Indian territory through the Satkhira border near Khulna. The Indian BSF arrested me. I revealed my identity and requested that I be allowed to contact my maternal uncle, M.A. Gafur, a member of the National Assembly of the provisional government-in-exile of the People’s Republic of Bangladesh. Gafur was also a political advisor of Sector 9. [During the war, Bangladesh was divided into 11 sectors. Sector 9 comprised the districts of Barisal and Patuakhali, and parts of the district of Khulna and Faridpur.]

On the 11th, I reached 10 Theatre Road, Calcutta, the HQ [headquarters] of the Mukti Bahini and also that of the government-in-exile. After a formal interview with General A.G. Osmani, the commander-in-chief of the Bangladesh Forces [Mukti Bahini], I was awarded a field commission. I was posted at Sector 9, which had its HQ at Basirhat and its operation HQ at Hingalganj. From the 13th, I started participating in different operations at the BOPs (border outposts) of Kaliganj, Khanjia, Debhata, Bashantapur, Uksha, and the thana HQ of Kaliganj and Shyamnagar where Pakistani militia are stationed. 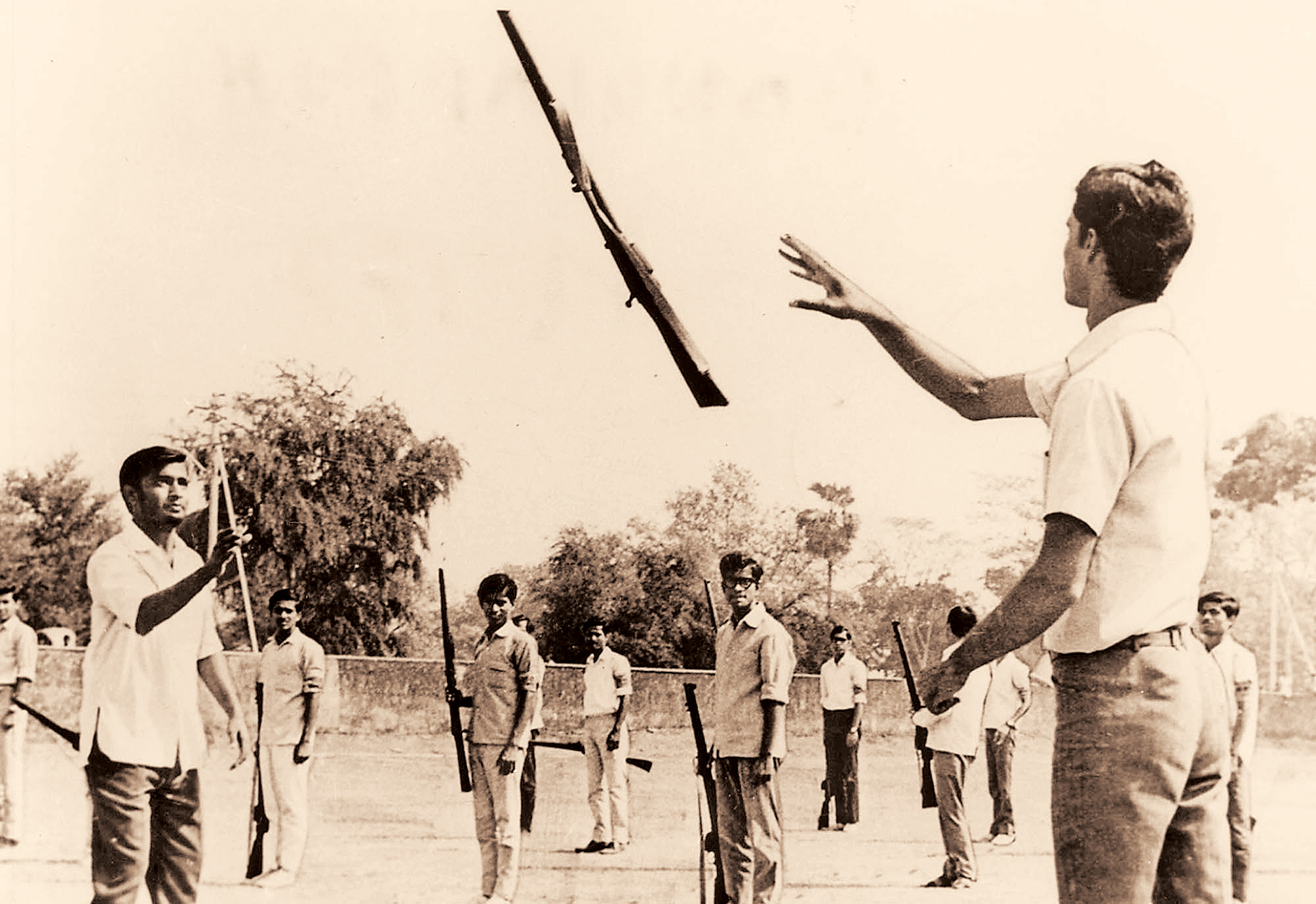 On the 7th, I received an order to establish a base camp at Bardal as sub-sector commander of Khulna. I was to facilitate the advance of the Mukti Bahini towards Mongla port and Khulna district HQ. Bardal was an important river and communication junction point; it was guarded by two companies of the Razakar Bahini [a paramilitary force raised by the Pakistani Army]. The forces I was commanding had a number of regular soldiers, East Pakistan Rifles, police and a few hundred freedom fighters... On the intervening night of 10th and 11th, we attacked the Razakar camp from three sides. The following morning, the entire Razakar group surrendered. Freedom fighter Musa Gazi sustained a grievous bullet injury; we hurriedly moved him to the Barrackpore Military Hospital in India. After the victory, we established our base camp at Bardal and a training camp at Hatiar Danga, which was a safe zone under Assasuni PS. It was meant to be safe to conduct training of Mukti Bahini there…

…Mid July. We attacked the Razakar stronghold at Kapilmuni under Paikgacha PS to clear the route. We planned on moving forces towards Goruikhali, which was a river junction, Lautara near Mongla port and the Jaigir Mahal area, in order to protect the base and training camps at Bardal and Hatiar Danga. We were conducting a number of operations in Kergati, Assasuni, Paikgacha and Tala. [Most of these areas went on to become a free zone for the movement of the Mukti Bahini by end September.]

We attacked the enemy stronghold of Assasuni PS, which was manned by Pakistani Army regulars, militiamen from West Pakistan and Razakars. We kept them engaged the entire day and night but couldn’t overrun them. Pakistani reinforcements from Satkhira and naval gunboats from Khulna attacked us next. They closed in from three sides. The battle raged for the next 10-12 hours. At the end of it, the enemy forces managed to extricate themselves, but at a price. They lost 19 men, three regulars and 16 Razakars. Many more went missing. 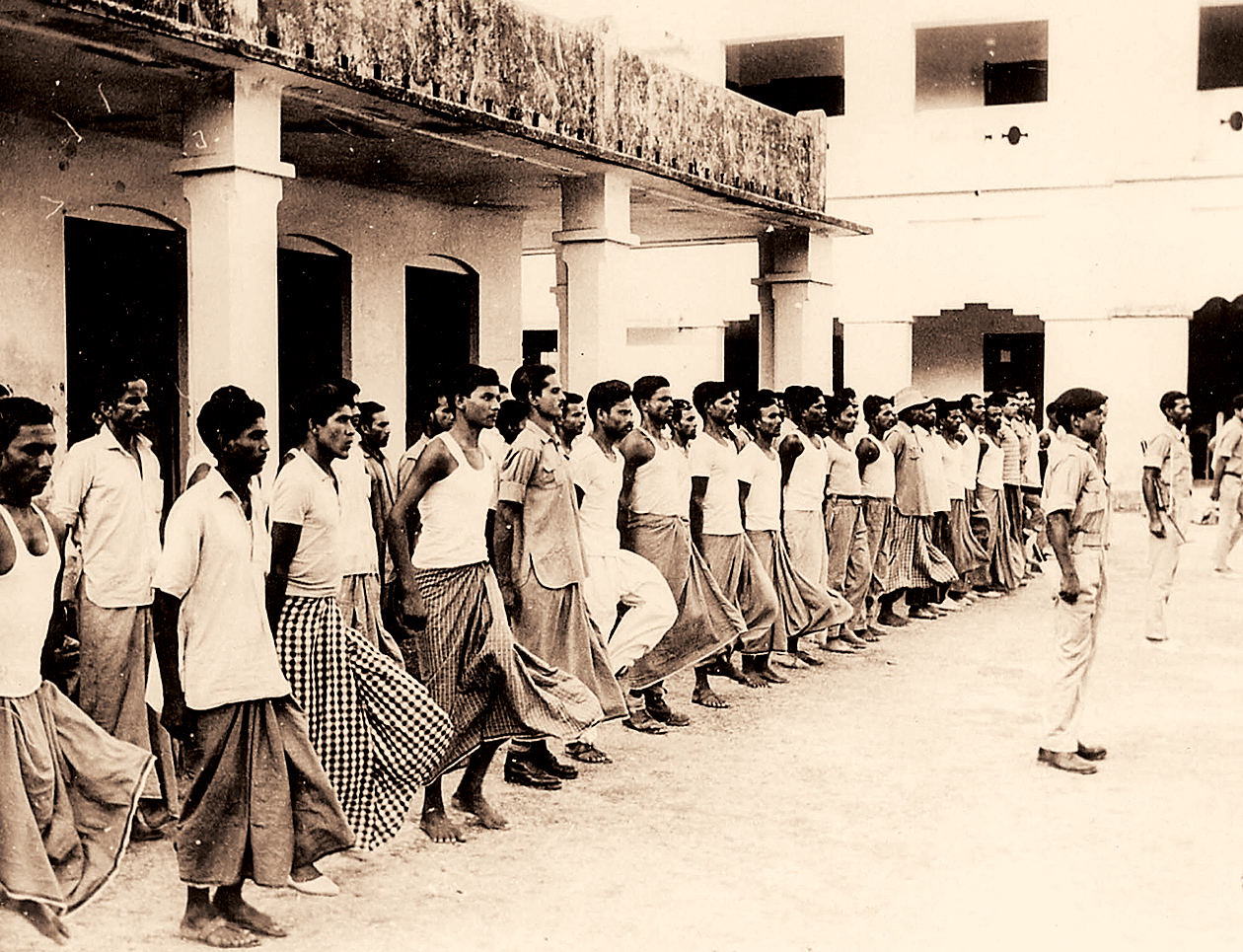 Early that month, the Pakistani troops made a sudden assault on Baka operation camp and evicted us. One of our men was killed, three went missing and nine were injured. A week on, we recovered Baka. We continued to expand our presence and increase the number of our camps in the operating area...

...Mid-September. We attacked the Goruikhali Razakar camp and brought back 22 prisoners and their weapons. Goruikhali was

an important river junction towards the advance route of Mongla port and Khulna district HQ. Next, we moved our HQ from Bardal to Goruikhali. Training camps were strengthened and recruits were trained for both land and naval operations...

...End September. I received a batch of naval commandos for the second operation on Mongla port... The operation was successful; six ships were sunk with the help of limpet mines. The naval commandos were led by Badiul Alam. A Bengali soldier of the Pakistani Navy, Alam had received advanced training in France. He defected from the Pakistani Navy after the crackdown on East Pakistan. He and seven others travelled to India and joined the Liberation War. They had received additional training in India to be “ship killers” and had trained more than 300 for underwater operations. After the Mongla operation, the naval commandos stayed back at Hatiar Danga training camp and started to train local boys.

...After capturing Assasuni PS and Kargati Razakar Camp, our supply line from the sector HQ to the base camp was now secure. A motorised launch service is being used to bring arms, ammunition and weekly rations for the Mukti Bahini. We captured the Paikgacha PS and the Baro Aria Militia Camp. We started planning our advance towards the Khulna district HQ. There were some Pakistani militia camps along the route and we had to clear them before we could plan for Khulna. Lt Gazi Rahmatulla (Dadu Bhai) of the Navy joined us at the Hatiar Danga training camp to facilitate the naval commando training and operations. He was one of the eight who had left the Pakistani Navy.

The floating ship, Lal Sira, inside the Sunderbans, where Pakistani troops were stationed to guard the route, had been captured. A good number of arms, ammunition and rations were collected. The Chalna Razakar camp had also been captured. We started mobilising forces to advance towards Khulna, our ultimate target. A businessman with the Khulna Newsprint Mills, Ayub Ali, had been assigned the task of carrying arms and ammunition in boats carrying timber. These were for Operation Khulna... Ayub was intercepted at Nalian by the Razakars. He went missing. We lost all our arms and ammunition.

I received an instruction to carry out another attack on Mongla port. This was to intercept shipments for the Pakistani military and general cargo and also to close the evacuation route of the Pakistani Army. Indian and Bangladeshi navy ships supported our operations in this sub-sector. The Mukti Bahini, including 21 naval commandos came out, left for Mongla Port. We went through the Sunderbans to the Lautara advance camp. The night after, we reached the Mongla port target area. Naval commandos swam out to their targets with limpet mines and put them under four ships. We waited at the bank. After half an hour, a series of explosions rocked the place. That was also the signal for us to open fire and spray the area with bullets for safe extrication of our commandos. All four ships sank. With a great feeling of victory we all returned to the camp.

Two nights later, we planned another attack on Mongla port. By this time, the Pakistani Army and Navy had intensified patrolling, but there were no eyes under water. We managed to sink two ships. But when the operation ended, one naval commando, Abdul Gafur, was missing. The following day, the Pakistani Navy attacked our camp from two sides and we had no choice but to leave Lautara and return to the base camp. Two days later, Gafur arrived at the Bardal camp, much to our relief.

During this period, my operation area had re-grouped with Sector 8 and with the “Friendly Forces Indian Charlie sector”. The operation was being co-ordinated by Major Shankar Roy Chowdhury, who was brigade major for sectors 8 and 9. [Later, he became chief of the Indian Army.] The Indian Air Force supported the Khulna operation... On the 25th, we attacked the Kapilmuni militia camp, under the command of Kamruzzaman Tuku, Gazi Rahmatullah and Babar Ali. I joined them with my troops. This fight continued for three days. Then the militia and Razakars surrendered to us. I returned to the Batiaghata advance position to plan Operation Khulna. The Pakistani Army and Navy (Mongla port) recovered eight coastal guns and 400 rounds of shells. 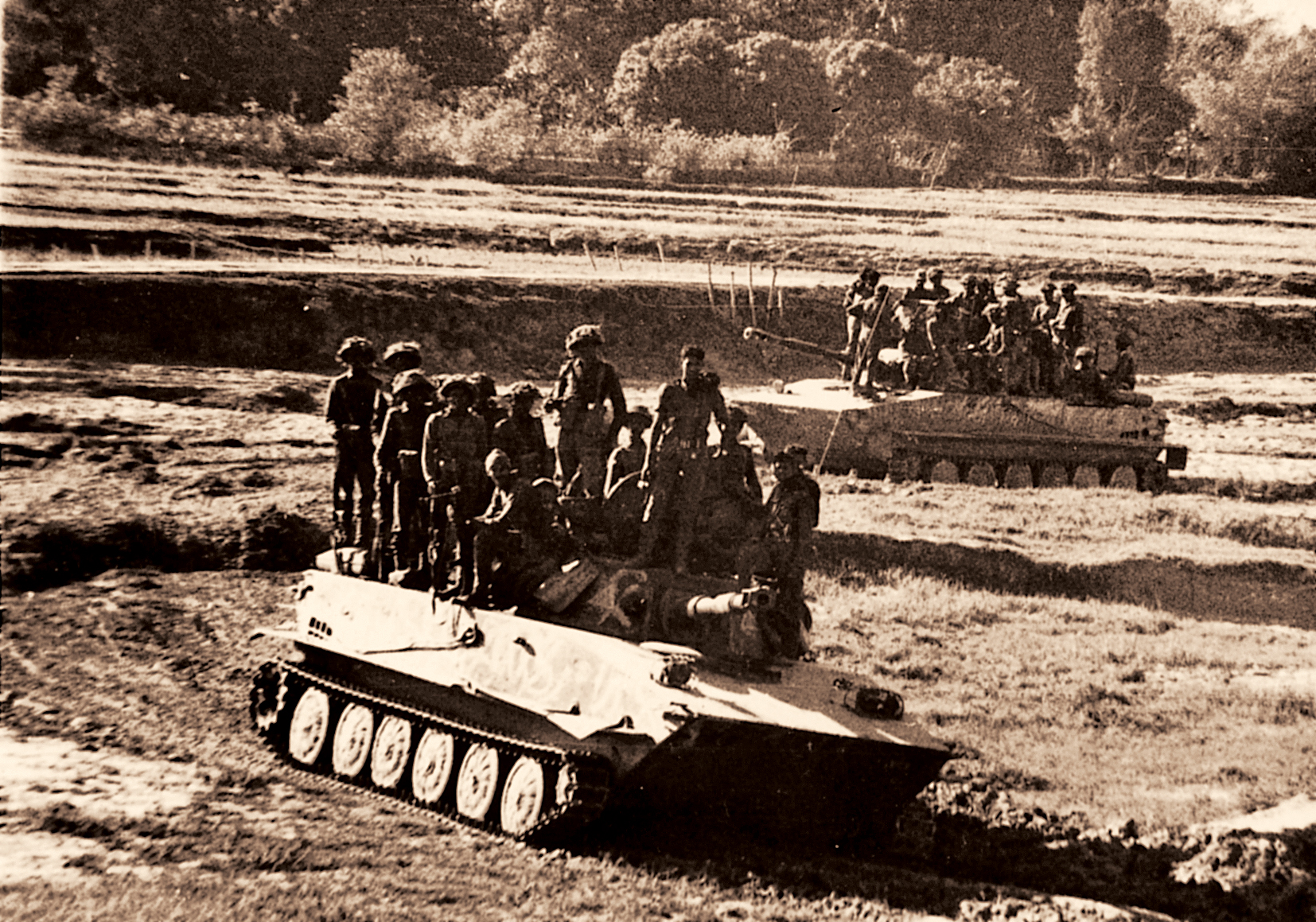 On the morning of 9th, we attacked Khulna Radio Station but due to high tide we could not make much headway. We finally had to abandon the attack. Two of our men were injured and I, too, had a narrow escape. On the 13th, Sector 9 fought a war at Patkelghata to clear the axis. Sector 8 fought a major tank battle at Shiromoni near Khulna. The Pakistani Army suffered heavy casualties. They were asked to surrender, but they refused. This was biggest tank battle of 1971.

On the 16th, the Pakistani Army was attacked from three directions. My troops, with eight coastal guns fitted on the barge, started firing on Khulna city from Labonchora area. The war continued into the night and, ultimately on the morning of the 17th, the Pakistani Army surrendered to the joint command. Lt Rahmat Ullah hoisted the flag at the Khulna circuit house. Khulna has been liberated.

In just nine months we succeeded in liber-ating our country. Bangladesh was born. We can never forget how the Indian government, the Indian defence forces and ordinary Indian citizens supported us during the War of Liberation. The people of West Bengal, Assam, Meghalaya and Tripura have stood with us. We acknowledge their wholehearted support. 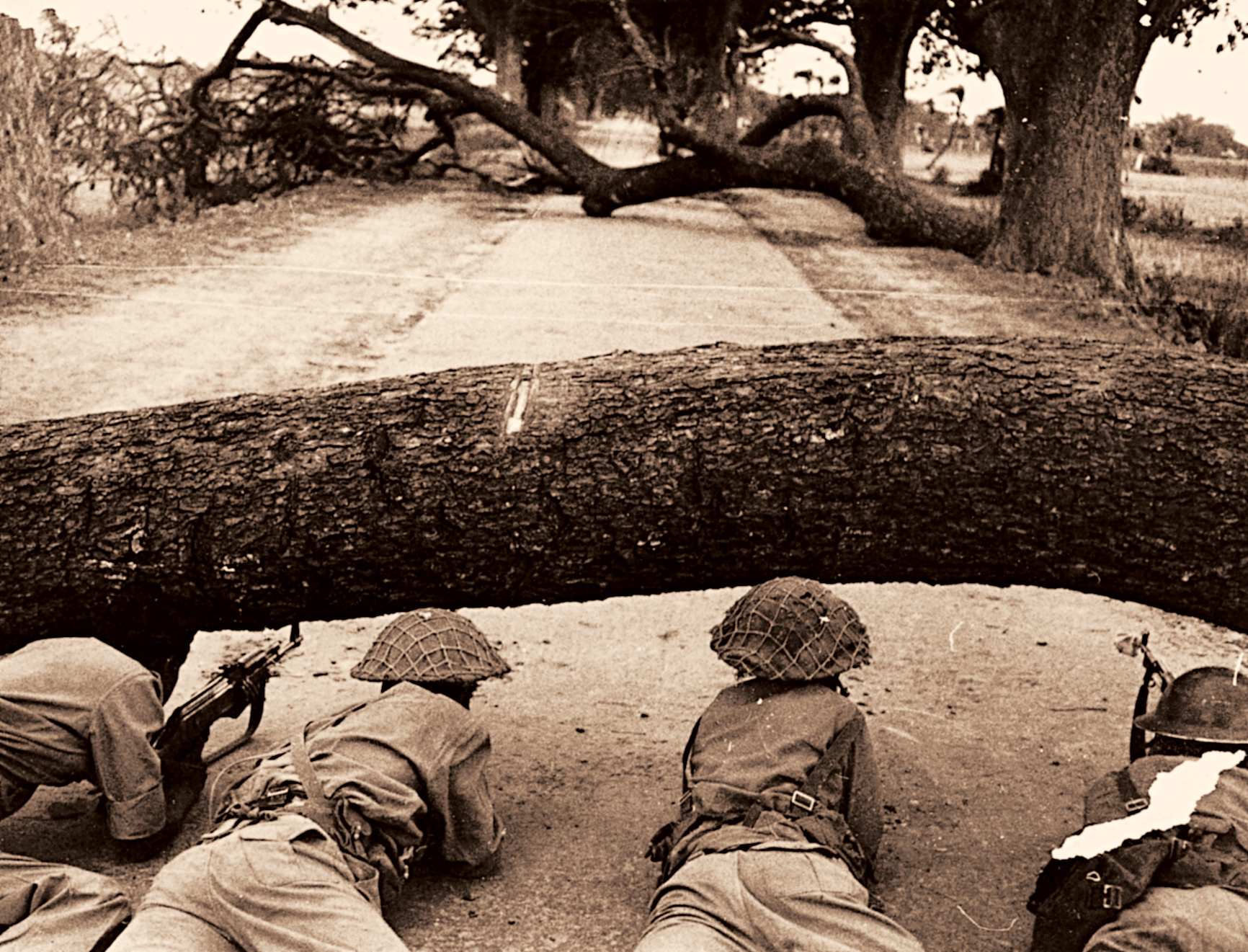 Year-long memorial events in Bangladesh leading up to the 50th anniversary of the Liberation War of 1971 have been disrupted by the outbreak of Covid-19.

Arefin started his career in the Pakistani Army in 1969 in Abbottabad. He quit in 1971 to join Bangladesh’s War of Liberation, otherwise known as Muktijuddho. He served the country’s army until he retired as a major in 1982.