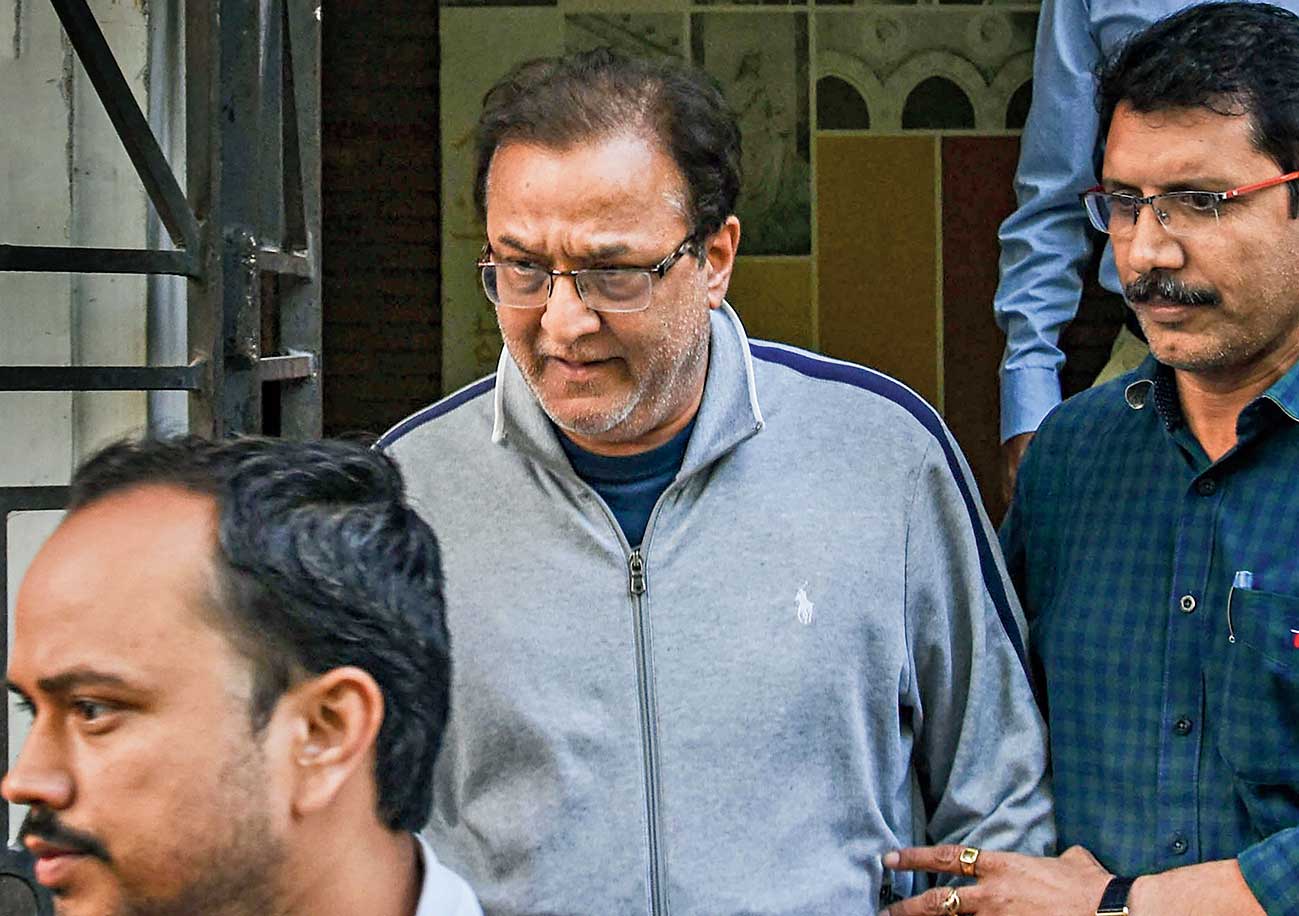 Rana Kapoor being taken to court after being arrested by the Enforcement Directorate in Mumbai on Sunday.
PTI
Our Special Correspondent   |   Mumbai   |   Published 08.03.20, 06:51 PM

A special holiday court has remanded Rana Kapoor, the Yes Bank co-founder, to the custody of the Enforcement Directorate till March 11, after the agency arrested him on money laundering charges.

The ED nabbed Kapoor around 3am on Sunday under the Prevention of Money Laundering Act (PMLA) after questioning him for more than 20 hours at its Ballard Estate office in south Mumbai. The agency had earlier raided his residence on Friday night.

The ED on Sunday stopped Rana Kapoor’s daughter from taking a flight to London as she is required to join the probe in a money laundering case against her father, officials said. They said Roshni Kapoor was disallowed to board the flight from Mumbai airport on the basis of a Look Out Circular (LoC) issued against her by the central agency.

Late on Sunday, the CBI booked Rana Kapoor, DoIT Urban Ventures, a company allegedly held by his family members, and DHFL promoter-director Kapil Wadhawan for alleged criminal conspiracy, cheating and corruption, sources said. The agency has alleged that Kapoor, 62, entered into a criminal conspiracy with Wadhawan for extending financial assistance to DHFL through Yes Bank in return for substantial undue benefits to himself and his family members through companies held by them, the sources said. DoIT Urban Ventures (India) Pvt Ltd is allegedly owned by Kapoor’s two daughters, Radha and Roshni.

Kapoor’s arrest comes nearly three days after Yes Bank, which was once the fifth largest private sector lender, was placed under moratorium with restrictions imposed on the withdrawal of deposits. Kapoor, 62, was brought to the court around noon. The ED is probing a Rs 600-crore loan given by Dewan Housing Finance Ltd (DHFL) to an entity against a collateral of less than Rs 50 crore.

The ED suspects a quid pro quo since Yes Bank has an exposure of around Rs 3,700 crore to DHFL, which is already being probed for purported financial irregularities and diversion of funds. The bank, they said, allegedly did not initiate action to recover the exposure, which had turned into an NPA.

Apart from this transaction, the ED is reportedly looking at investments worth over Rs 2,000 crore made by the family, including an asset in London. The ED is examining the source of funds for the acquisition.

An emotional Kapoor told the court that he has been under psychiatric treatment since he lost his “baby” (Yes Bank) and that he is co-operating with the agency in its investigations.

Kapoor also told the court the loans were provided to DHFL since at that time the housing finance company had an AAA rating. He said DoIT Urban Ventures (India) Pvt Ltd was still repaying the loan and it was not a non-performing asset.The counsel for ED argued in the court that the proceeds totalling Rs 4,300 crore — Rs 3,700-crore loan to DHFL and the latter’s Rs 600-crore loan to DoIT Urban Ventures — is public money.

The defence lawyer said Kapoor had been selectively targeted by the ED and he was co-operating with the probe agency.Rana Kapoor had set up Yes Bank in 2003 with his brother-in-law Ashok Kapur, who was killed during the terrorist attacks in Mumbai in November 2008. After his death, the two promoter families were engaged in a protracted legal battle.

Yes Bank under Rana Kapoor aggressively grew its loan book, culminating with the RBI finding huge divergence in the bad loan reported by the bank from its own assessment for the year ended March 31, 2016 and March 31, 2017. The divergence was believed to be one of the major reasons behind the RBI refusing to extend Kapoor’s tenure beyond January 2019.

Meanwhile, Indiabulls Housing Finance said Yes Bank owes it Rs 662 crore in the form of bonds and it has no term loans outstanding from the private sector lender.