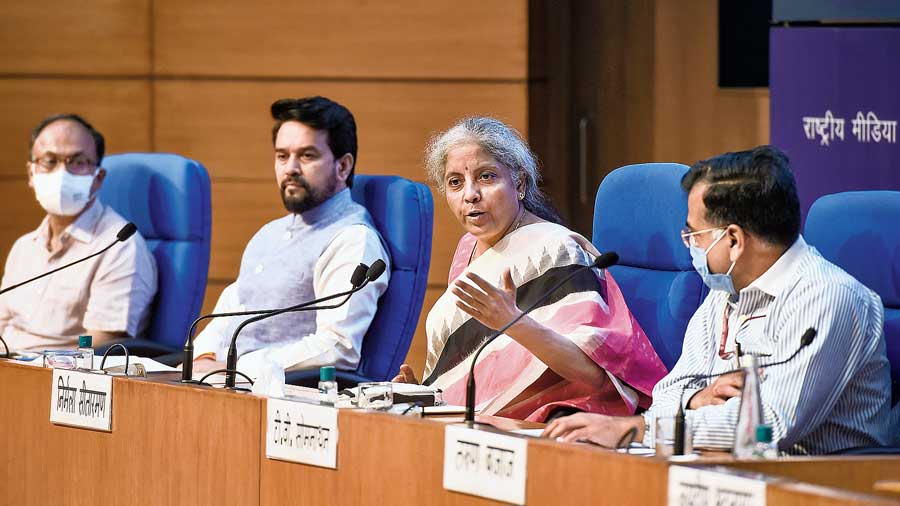 Finance minister Nirmala Sitharaman with minister of state Anurag Thakur and other officials in New Delhi on Monday.
PTI
Our Special Correspondent   |   New Delhi   |   Published 29.06.21, 01:36 AM

Finance minister Nirmala Sitharaman’s Rs 6.28-lakh-crore relief package — laden with loan guarantees, previous expenditure announcements and insurance support, which mean little by way of fresh expenditure proposals — was just what the doctor did not order to revive an economy devastated by the twin waves of the coronavirus, with experts warning of a third wave making its way towards the economy.

None of the major proposals of industry chamber CII found their way in the FM’'s package announced Monday. Newly elected CII chief T.V. Narendran had estimated that there was fiscal headroom of up to Rs 3 lakh crore and this amount could be channelised towards direct cash transfers to the vulnerable people, higher allocation to the rural job scheme, short-term Goods and Services Tax (GST) rate cuts and lower excise duty on fuel.

The finance minister did not indicate whether the relief package was a part of a series of stimulus measures to be announced in the coming days  or whether this was just a one-off measure.

A week ago industry chamber PHDCCI had said  calibrated measures were needed to support the country's economic recovery and to diminish the daunting impact caused by the two waves of the coronavirus.

“There is a need to re-fuel household consumption to enhance demand in the economy as it will have an accelerated effect on the expansion of capital investments in the country,” PHDCCI president Sanjay Aggarwal said.

“These are not really new schemes but extensions that have the power to help growth over a period of time,” Madan Sabnavis, chief economist, Care Ratings, said.

The finance minister used the occasion to shoe-horn a budget proposal on power sector revamp within the relief package announced Monday.

Sabnavis said the measures were more in the nature of medium-term reforms that will help farmers, exporters, power sector and manufacturing. Unlike advanced economies, which offered huge stimulus packages for households, India has relied on pumping more state funds into infrastructure, state guarantees on bank loans to pandemic-hit businesses and free foodgrain for the poor.

“Most of the fiscal support is still below the line and in the form of loan guarantees, and not direct stimulus,” said Madhavi Arora, lead economist, Emkay Global Financial Services, told Reuters.

She said that given the limited efficacy of monetary easing, continued countercyclical fiscal policy support — and avoiding a premature consolidation — remained crucial.

The government’s fresh stimulus measures failed to lift investor spirits with the BSE Sensex closing 189 points lower after hitting record levels earlier during the day. Though the benchmark indices were in a negative territory ahead of Sitharaman’s announcement which came towards the end of the trading session, it could not turn the tide.

Views remain divided with some experts opining that the actual reaction may be seen on Tuesday when investors would have analysed the steps. There are others who feel that since expectations were not high in the run-up to the stimulus package, stocks movement will be determined by other factors such as the spread of virus, vaccination roll-out and corporate earnings. After touching a life-time high of 53126, the Sensex ended the day at 52735.