Patna DM, police chief and officials of a host of departments worked tirelessly for 4 days 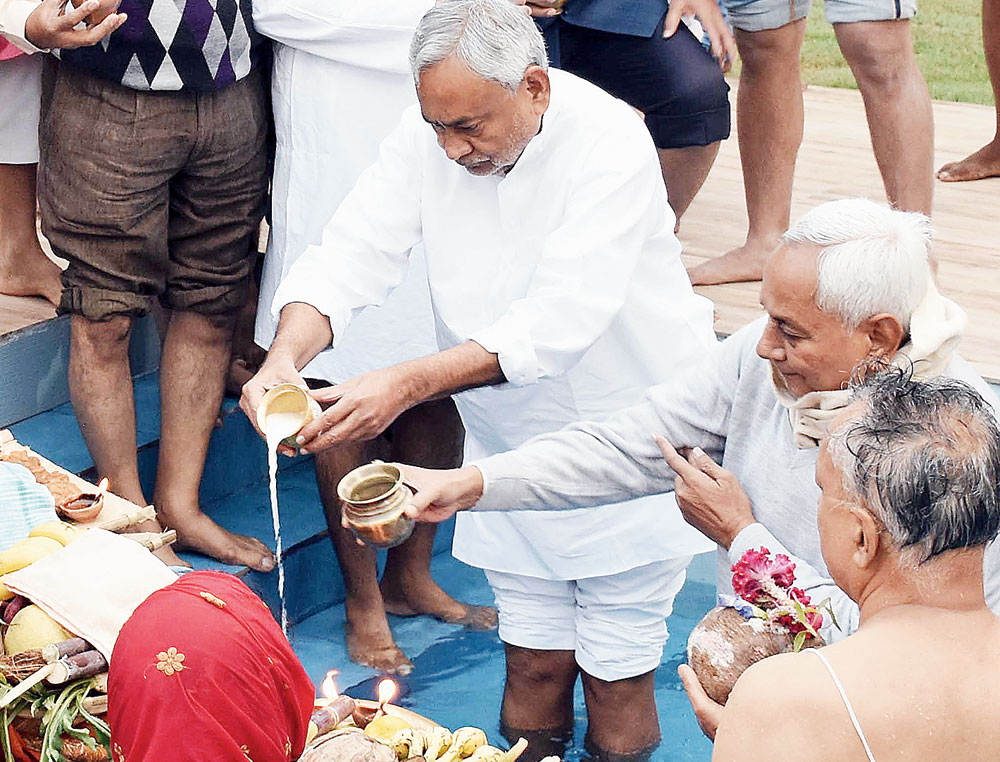 CM Nitish Kumar takes part in Chhath Puja rituals at his residence as the festival comes to an end on Wednesday morning. Nitish offered arghya or oblations of milk to the Sun on the occasion and prayed for the welfare and prosperity of Bihar.
Picture by Nagendra Kumar Singh
Amit Bhelari   |   Patna   |   Published 14.11.18, 05:52 PM

A 50-year-old man fainted at Collectorate Ghat during Chhath celebrations on Tuesday. The Telegraph team, which was at the spot, alerted the two policemen atop the nearby watchtower. The cops immediately sprung into action and within 10 minutes, an ambulance had arrived to help the man, who had come from Jehanabad around 48km south of Patna. It was a fine example of the arrangements the Patna district administration put in place for Bihar’s biggest festival, which concluded on Wednesday.

Lakhs of people gathered on the ghats, and the festivities were devoid of any untoward incident.

Patna district magistrate (DM) Kumar Ravi and senior superintendent of police Manu Maharaaj hardly slept for the four days of Chhath and kept on monitoring the ghats by boat, by road, on foot, and even on horseback.

The DM refused to take credit.

“It was the officials of the respective departments who completed the work in the stipulated timeframe and remained alert during all four days ensuring best arrangement for the devotees,” Ravi told The Telegraph on Wednesday. “Building construction, water resources, road construction, public health and engineering and urban development and housing departments, Patna Municipal Corporation — they all worked hard, including the traffic police.”

As the sea of humanity prayed to the Sun, the giver of life, the district administration teams reminded them not to ignore their own safety. Continuous announcements from the public address systems reminded them: Do not go near the barricading, do not leave your child alone, do not burst crackers on the ghats…

On the approach road of the ghats, there were two separate lines for four-wheelers and two-wheelers; the stretches were free of traffic chaos.

Watchtowers, changing rooms, lighting arrangements, temporary toilets, close circuit television cameras — all played a role in making the festival successful. Many children did get separated from their families, and the control rooms played an important role in helping them.

“As many as 40 children were lost at Collectorate and Mahendru ghats but they were all reunited with their families with the effort of the district administration,” Ravi said.

The numbering of the watchtowers and control rooms helped in finding the lost children. For example Munna Thakur, a boy ho lives near Churi Market, got lost at Collectorate Ghat. The announcements told the boy to come near control room 27 where his parents were waiting. Within half an hour the boy reached there with another devotee escorting him.

The administration used posters and banners liberally to make the devotees aware about the precautionary measures they should take on the riverbank. The mobile application was equally helpful, said many devotees.

During morning arghya on Wednesday, the police did not leave until all devotees had left the ghats.

“Every passing year, the arrangement is becoming far better; our sincere thanks to the Bihar government and the district administration,” Mukesh Sinha, a resident a of West Boring Canal Road, said at Mahendru Ghat.

DM Ravi said all officials and volunteers — including the National Disasters Response Force and State Disaster Response Force personnel — deployed on Chhath duty would be given certificates of excellence.