Advertisement
Home / World / Why has Pakistan not realized its economic and political potential?

Why has Pakistan not realized its economic and political potential?

Despite gaining independence 75 years ago, the nation has yet to rid itself of all types of crises 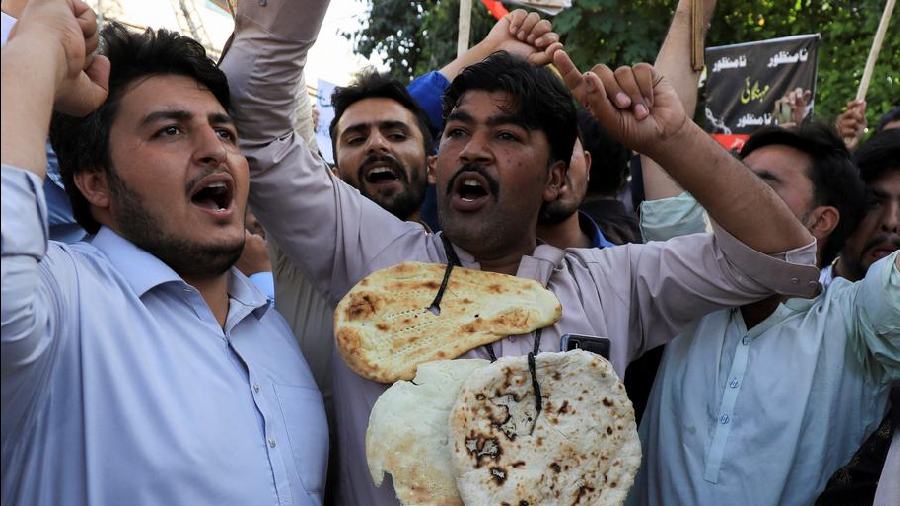 As Pakistan marks 75 years of independence this weekend, Islamabad has not planned any special events, aside from a flag-raising ceremony, a fireworks display in the capital and the introduction of a new 75 rupee (€0.34/$0.35) note.

The economic turmoil is putting heavy pressure on Pakistan's new government, which is currently in long-running negotiations with the International Monetary Fund on a bailout deal to stave off a disastrous default on foreign debt.

"The common explanation for Pakistan's relatively uninspiring economic performance is that the country's riches are regularly plundered by corrupt politicians and bureaucrats, making it seem poorer than it is," said Haqqani. But he said that Pakistan's economic trouble goes deeper than mere corruption.

Pakistan remains a net importer of goods and services, and its industrialization has not expanded sufficiently to close the gap. The ratio between tax collection and GDP as well as between exports and GDP for Pakistan is also among the lowest in the world. This means that the government faces a persistent shortage of revenue, and the country confronts a perennial shortage of foreign exchange.

"Successive Pakistani leaders made the choice of depending on foreign aid while building military capacity, ignoring the fundamentals of economics," said Haqqani, who is currently director for South and Central Asia at the Hudson Institute, a think tank in Washington, D.C.

However, it wasn't always like this. According to renowned economist Kaiser Bengali, Pakistan pursued robust development and created a vast amount of economic assets in the years following independence in 1947.

Bengali told DW that after Pakistan opened more to foreign interests around the year 2000, government spending and imports began to far exceed tax revenues and exports, with the gap made up by foreign loans.

"Today, loans are contracted only to repay past loans — none for any development projects," he said.

In April, former premier Imran Khan was ousted from office in a no-confidence vote after being blamed for mismanaging the economy over his three years in office.

Khan claimed he was "overthrown" by a "US-backed, imported government." His supporters took to the streets in protest, and Khan remains a destabilizing political force.

Khan's successor, Shehbaz Sharif, has faced an uphill battle with a fractured polity and floundering economy.

As the Sharif government negotiates with the IMF on debt relief, it has removed fuel subsidies in a bid to increase public revenue. His detractors have accused him of selling out ordinary Pakistanis to the benefit of foreign creditors.

Military always looming in the background

For decades, Pakistan's military has been a powerful political and economic force. It holds considerable sway over civilian institutions, contributing to public perceptions of government corruption.

Opponents of Khan have accused the former premier of being a "puppet" of the army, with some liberal analysts saying the military rigged the 2018 general election to bring Khan's Pakistan Tehreek-e-Insaf party to power, a claim both the military and Khan have denied.

"Imran Khan is the civilian face of a military state," Tauseef Ahmed Khan, a Karachi-based political analyst, told DW in a 2021 interview.

Maleeha Lodhi, a former Pakistani diplomat, told DW that political discontinuity has "contributed greatly" to Pakistan's problems as the country has "alternated between military rule and civilian governance in a cyclical pattern."

"It has also left a legacy of a power asymmetry between elected and unelected institutions," she added.

"Governance challenges are also the result of blowback from the country's protracted geopolitical engagements during the Cold War and beyond, impact of great power rivalries and the fault lines of geopolitics in the region," Lodhi said.

"Pakistan's army leadership has never trusted civilian politicians to act in what they view to be 'the country's interests' and so have repeatedly intervened to remove civilian leaders, through coups, both judicial and military," he added.

Since 1947, when Pakistan became independent after the dissolution of the British Raj and split off, Islamabad's foreign policy has been focused on its archrival, India.

"Pakistan's foreign policy, and diplomacy has been driven by an ideology-based paradigm, which has centered on parity with its larger neighbor," said Haqqani.

"Relations with the US during the Cold War, with China, and even with countries in the larger Muslim world have focused on the India factor, instead of ensuring national security and fostering economic development," he added.

This rivalry is also reflected domestically, as Pakistanis point out that their government seems less interested in celebrating independence from the British crown than India, where extensive preparations for the anniversary have gone on for months.

"This year it seems that there is very little enthusiasm for Independence Day celebrations," Islamabad resident Osama Malik told DW.

"I remember the 50th anniversary celebration. The government had invited multiple singers and musicians and arranged a show right in front of parliament. Many events were held in schools across Islamabad," he said.

Where does Pakistan go from here?

Although Pakistan has made great strides in development since 1947, the next 75 years look to be considerably more challenging.

"Pakistan has made progress in many areas. That includes pulling people out of extreme poverty and building a significant industrial and agricultural base. Its much larger middle class now contributes in many ways to the country's progress," said former diplomat Lodhi. "But major challenges persist. Many overlap and have been reinforcing each other in a vicious cycle over the decades."

"Fear of survival has engendered corruption and dynastic rule within civilian political parties and prevented the rise of newer parties … making the country more politically and socially unstable," she added.

Farzana Bari, a rights activist and academic, told DW that over decades Pakistan's ruling classes have served the "colonial interests of the ruling elite," which cut out marginalized communities and the larger public.

"Successive governments have not spent on human resources, primarily education and health," she said, adding that there are hopes for Pakistani youth to create a stronger civil society and bring the country on a "progressive path."

To move forward, analyst Haqqani said Pakistanis will "need to move beyond conspiracy theories and ideological narratives, and instead seek to focus attention on building Pakistan's human capital, economic potential, and political institutions."