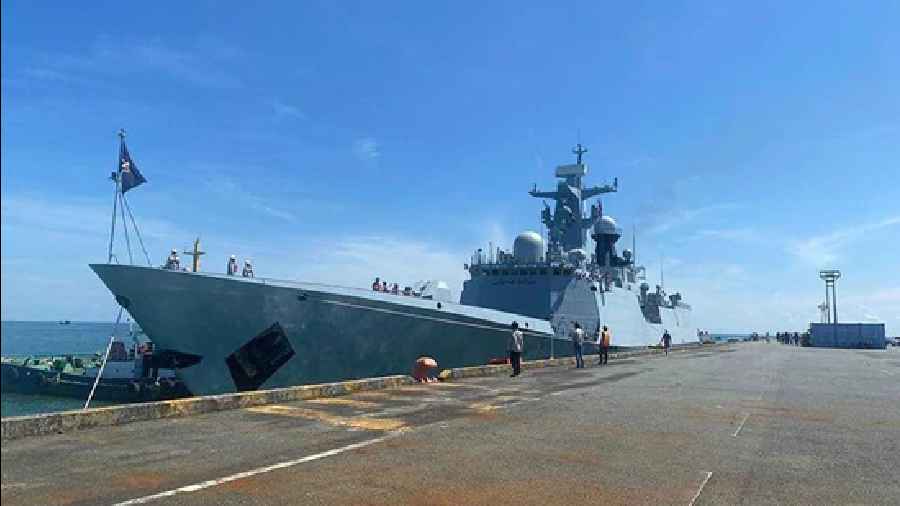 Pakistan's newly-commissioned Chinese-built frigate warship PNS Taimur arrived at the Colombo port on Friday and will conduct a joint exercise with the Sri Lankan Navy in the western seas.

The docking of the Pakistani warship at the Sri Lankan port came days after Colombo urged Beijing to defer the visit of Yuan Wang 5, a Chinese research vessel, at the strategic Hambantota port after India expressed security concerns over the presence of the ballistic missile and satellite tracking ship.

Sri Lanka allowed PNS Taimur to make a port call in Colombo while on its way to join the Pakistan Navy here on August 15 after the Bangladesh government denied it permission to dock at Chattogram Port.

The Pakistani naval ship is expected to remain in Colombo until August 15 and the crew of the ship will take part in several programmes organised by the Sri Lanka Navy to promote cooperation and goodwill between the two navies, News First, an online news portal, reported.

Further, PNS Taimur is expected to conduct a naval exercise with the Sri Lanka Navy in western seas before its departure on August 15.

PNS Taimur is the second of four powerful Type 054A/P frigates built by China. It was delivered to the Pakistan Navy in Shanghai on June 23. The first ship in the Type 054A/P-class, the PNS Tughril, joined the Pakistan Navy Fleet in January. Two more frigates of the same class are currently under construction in China.

PNS Taimur took part in exercises in Malaysia and Cambodia along its journey to Karachi.

The 134m-long ship is a technologically advanced and highly capable sea asset having hi-tech weapons and sensors, the latest combat management and electronic warfare system to fight under multi-threat environments, according to media reports.