The US President storms out of a meeting with Democrats 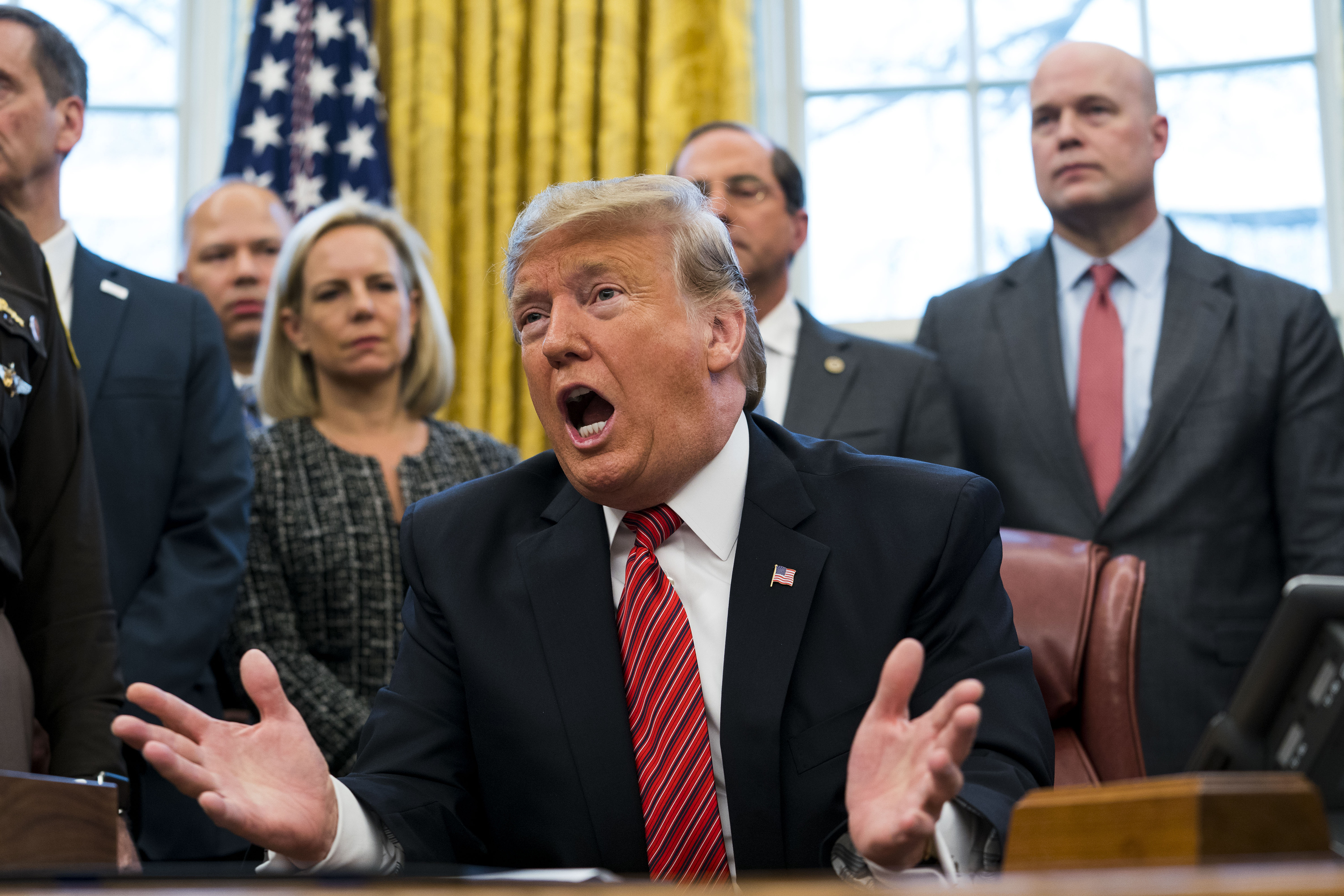 President Donald Trump stormed out of a White House meeting with congressional leaders on Wednesday after House Speaker Nancy Pelosi said she would not fund a border wall even if he agreed to reopen the government, escalating a confrontation that has shuttered large portions of the government for 19 days and counting.

Stunned Democrats emerged from the meeting in the White House Situation Room declaring the President had thrown a “temper tantrum” and slammed his hands on the table before leaving with an abrupt “bye-bye”. Republicans disputed the hand slam and blamed Democratic intransigence for prolonging the standoff.


It wasn’t even a high-stakes negotiation; it was a petulant President of the United States.
- Nancy Pelosi


When the meeting was over, talks to reopen the government appeared to be in disarray. The contentious, brief and futile session underscored an impasse that is looking each day like an insurmountable gulf between the two sides. Trump will visit the border on Thursday in McAllen, Texas, leaving little hope of a resolution for a shutdown that will tie the longest in the nation’s history on Friday.

“It wasn’t even a high-stakes negotiation; it was a petulant President of the United States,” Pelosi said as she returned to the Capitol. “A person who would say, ‘I’ll keep government shut down for weeks, months or years unless I get my way.'”

Trump called the exercise “a total waste of time.”

Just left a meeting with Chuck and Nancy, a total waste of time. I asked what is going to happen in 30 days if I quickly open things up, are you going to approve Border Security which includes a Wall or Steel Barrier? Nancy said, NO. I said bye-bye, nothing else works!

Day 19 had begun with what looked like signs of splintering support within the President’s own party. Sen. Lisa Murkowski, R-Alaska, pledged to confront Trump in a closed-door lunch at the Capitol, while more mainline conservatives like Sen. Pat Roberts, R-Kan., expressed misgivings about the President’s strategy.

Though Senate Republicans had not yet reached a breaking point, Roberts said, “We’re getting pretty close.”

But those differences largely had been papered over by day’s end. The House voted 240-188 to fund the Treasury Department, the IRS, the Securities and Exchange Commission and other agencies, including White House operations. The eight Republican defections exceeded last week’s vote to fund the government by only a single vote.

Trump, for his part, held out the possibility that he might declare a national emergency to build his promised border wall and circumvent Congress altogether — a deeply divisive option even within his own party that could allow him to use money allocated for the military and one that would almost certain be challenged in court.

“There was no discussion about anything other than solidarity,” Trump said after his lunch with Senate Republicans and before the White House negotiating session.

As the sides feuded, 800,000 federal workers were going without pay, and government agencies continued to reduce services, part of the cascading effect of a partial shutdown now possibly headed for a fourth week.

So frayed were feelings after a frantic 24-hour period of accusations and recriminations, including dueling nationally televised addresses, that Republicans and Democrats emerged from the White House meeting unable to agree on what had happened in the room.

On this they did: Trump insisted again on $5.7 billion in border wall funding, and asked Democrats, who he pointed out have supported money for physical barriers in the past, if they would capitulate if he agreed to reopen the government. Democrats told him again that they support increased funding for border security, but refused to commit additional money for a physical barrier they believe is a waste of money. They laid out what they said was unnecessary damage being done to federal workers.

“You are using people as leverage; why won’t you open the government and stop hurting people?” Sen. Chuck Schumer of New York, the Democratic leader, asked Trump at one point during the meeting, according to Democratic congressional officials and a White House official familiar with the exchange.

“Then you won’t give me what I want,” Trump replied, the congressional officials said. The White House official said that Trump added, “I am trying to do the right thing for the country. This isn’t about politics.”

But there are signs of strain. After his lunch with Senate Republicans, Trump declared that the party was “totally unified,” even if he faced some questions about “strategy.”

Leading up to it, though, the number of Republicans uneasy about the president’s tactics appeared to be growing. Sen. Shelley Moore Capito, R-W.Va., chairperson of the appropriations subcommittee on homeland security, had warned on Tuesday that she could potentially support reopening the government as talks continued on border security — the Democratic position.

“I mean, I think I could live with that,” Capito said. She said she expected pressure from federal employees and voters in her state would only mount the longer the impasse drags on. “I’ve expressed more than a few times the frustrations with a government shutdown and how useless it is, so that pressure’s going to build,” she said.

Murkowski had vowed to confront the President on the shutdown’s effect on her state. She and other moderate Republicans entered the lunch confident that senators were coalescing around the idea that the government should be reopened, but they left disappointed, convinced that for now, the party would follow Trump perilously further into a shutdown with an uncertain end.

A handful of them, including Murkowski and Sens. Cory Gardner of Colorado, Susan Collins of Maine and James Lankford of Oklahoma, pressed Trump on the mounting burden on federal workers and related industries in their states. His response was consistent.

“I was able to raise the issues that I have with using a shutdown,” Murkowski said. “He listened and urged that we all stick together.”

Several senators, including Collins, sought to find a way out of the impasse through a broader deal. In the meeting, she urged the president to reconsider an earlier deal that would have given him $25 billion for a wall in exchange for permanent protections for young immigrants brought illegally into the country as children, according to Republicans familiar with the exchange.

The President dismissed the idea. A handful of senators huddled on Wednesday evening with the President’s son-in-law and senior adviser, Jared Kushner, to hash over possible ways out of the impasse. But no apparent progress was made.

For now, at least, the President seems to have maintained support for his uncompromising position.

Democrats, who are confident Trump is taking the brunt of the blame for the impasse, showed little sign of capitulation. The House vote to fund financial agencies and the White House was the first of several this week on individual spending bills that are intended to pick off uneasy Republicans. But in the end, it drew only one more Republican than a vote last week to reopen the government. A White House official said on Wednesday that Trump would veto any such bill.

In the Senate, Democrats had managed to grind to a stop unrelated foreign policy legislation to increase pressure on Sen. Mitch McConnell, R-Ky., the Senate majority leader, to relent on his insistence that he will not put any bill to reopen the government up for a vote there without Trump’s support.