Was Imran Khan wrong in attributing quote to Kahlil Gibran, not Rabindranath Tagore 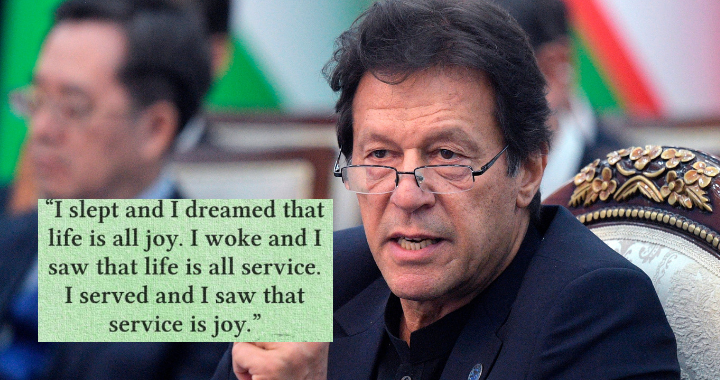 Imran was never known for his knowledge in literature.

Lebanese Gibran and Indian Tagore were almost contemporary and wrote on similar themes such as spirituality, faith and destiny. They are also two widely translated poets and essayists from the east.

A simple search on Google using the lines Imran mentioned threw up two choices as the original writer - Gibran and Tagore. Gibran was mentioned more in he Google search.

They had Admissions on Donation in Oxford also Mr @ImranKhanPTI 😳😳? BTW for you the very first five Words of this Gurudev Tagore’ quote are enough to learn “I slept and I dreamed” 😂🙏 Keep on sleeping, Keep on Dreaming Captain 👍😜 https://t.co/LQH3E3BX9z

Those who discover and get to understand the wisdom of Gibran's words, cited below, get to live a life of contentment. pic.twitter.com/BdmIdqGxeL

Oxford Graduate ? Selected PM of Pakistan have put the credibility of Oxford also in danger 😂

Pakistan Prime Minister Imran Khan got some Twitter roasting when on Wednesday he posted a quote that credited Lebanese writer Kahlil Gibran.

“Those who discover and get to understand the wisdom of Gibran's words, cited below, get to live a life of contentment,” Khan wrote on his Twitter account along with a quote. Many thought that it was a quote of Rabindranath Tagore's and lectured the Oxford-educated Imran for his poor knowledge of world literature.

Here is the Oxford educated Prime Minister of Pakistan of the proud Pakistani people! @IamMafiaa @Pagal_aurat
He doesn't even check his facts before posting it on world stage!

All you idiots making an issue of this quote should go do a little research and you'll find PM Khans quote IS CORRECT. 3 different people have virtually the same quote attributed to them, Gibran, Tagore and Coelho. The one used by Imran Khan being the Gibran one!