US synagogue shooting as Passover ends 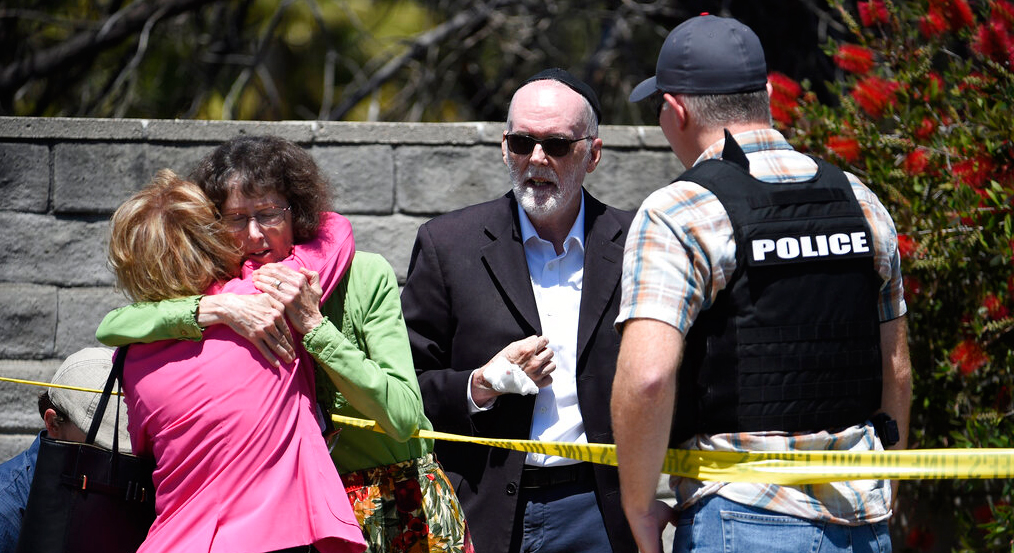 The gunman entered the synagogue on Saturday yelling anti-Semitic slurs, and opened fire with an AR 15-style gun. He paused when the rabbi of the congregation tried to talk with him. But he fired again, shooting the rabbi in the hand.

His attack left a 60-year-old woman dead, the rabbi wounded and a 34-year-old man and a girl with shrapnel wounds.

It was the Sabbath and the last day of Passover, a holiday that celebrates Jewish freedom.

The shooting, at Chabad of Poway, about 40km north of San Diego, is the most recent in a series of deadly attacks at houses of worship, including the mass shooting at mosques in New Zealand last month and the church bombings in Sri Lanka last week. It came exactly six months after one of the worst acts of violence against the American Jewish community in decades left 11 dead in a Pittsburgh synagogue.

Local officials called the shooting in Poway, California, a hate crime. The gunman, whom officials identified as John Earnest, a 19-year-old resident of San Diego, screamed that Jews were ruining the world as he stormed the synagogue, according to a government official with knowledge of the investigation.

The gunman then fled the building, perhaps because his gun stopped working, the authorities said. An off-duty Border Patrol agent at the synagogue shot at the suspect’s vehicle as he tried to escape. The bullets punctured the suspect’s car but did not injure him.

The synagogue did not have a guard at the time, the official said, and there were about 40 to 60 people there at the time of the shooting. Some had come to services especially to say Yizkor, a memorial prayer for the dead that is said on Jewish holidays.

The rabbi, Yisroel Goldstein, and three of his congregants were taken to Palomar Medical Centre.

The San Diego police chief, David Nisleit, said that after the shooting, the gunman called the California Highway Patrol to report his location on Interstate 15 in Rancho Bernardo. He then surrendered to a police officer who was responding to the attack, jumping out of his vehicle with his hands up.

In an interview on Sunday with NBC’s Today programme, Rabbi Goldstein described the attack.

“I was face-to-face with this murderer, terrorist, who was holding a rifle and looking straight at me,” Goldstein said. “As soon as he saw me, he started to shoot towards me. My fingers got blown away.”

Goldstein said the woman killed was Lori Kaye, a founding member of the three-decade-old congregation.

“Just a kind soul,” said Goldstein, who underwent surgery at the hospital. “Everyone in the community knew her.”

A woman who said she was a friend of Kaye, Audrey Jacobs, wrote on Facebook that Kaye left behind a husband and a 22-year-old daughter.

“Lori would have wanted all of us to stand up to hate,” Jacobs wrote. “She was a warrior of love and she will be missed.”

Earnest was enrolled at California State University in San Marcos. In a statement, the university’s president said the school was “dismayed and disheartened” to learn Earnest was a student and was working with the sheriff’s department.

Earnest attended Mt. Carmel High School in San Diego, where his father taught physics before retiring in 2016, according to the San Diego Union-Tribune newspaper.

The police are investigating if Earnest had authored a “manifesto”, in which the author has also claimed to have set a nearby mosque on fire last month and professed drawing inspiration from the gunman who killed nearly 50 people at two mosques in New Zealand.

San Diego county sheriff Bill Gore said police and the FBI were investigating Earnest’s “possible involvement” in the March 24 pre-dawn arson fire at the Islamic Centre of Escondido, a town 24km north of Poway. No one was hurt at the mosque fire.

Gore said Earnest has no prior criminal record.

Poway mayor Steve Vaus characterised the shooting as a “hate crime”, saying his assessment was based on statements uttered by the gunman when he entered the synagogue.

The “manifesto” on the online message board 8chan is an anti-Semitic screed filled with racist slurs and white nationalist conspiracy theories.