US lawmakers in $2-trillion aid deal 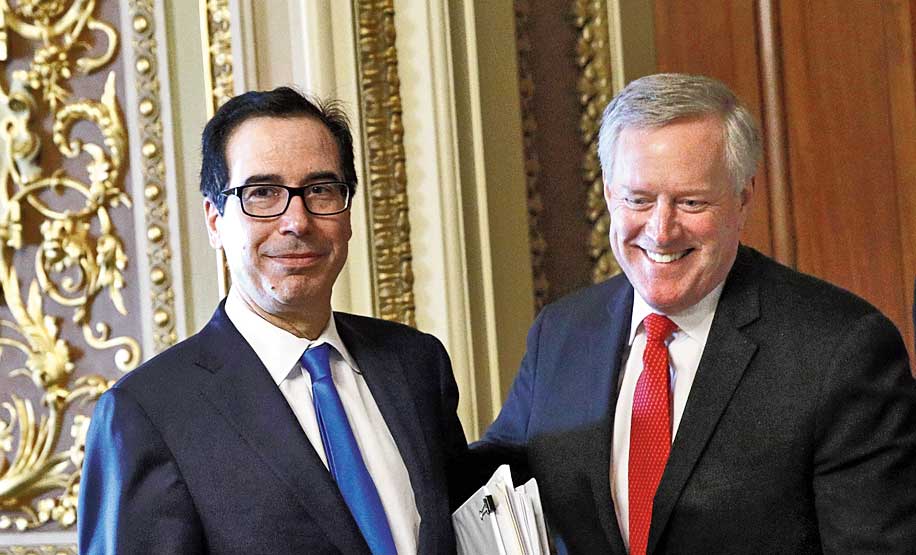 Senators and Trump administration officials reached an agreement early on Wednesday on a sweeping, roughly $2 trillion stimulus measure to send direct payments and jobless benefits to individuals as well as money to states and businesses devastated by the coronavirus pandemic.

The legislation, which is expected to be enacted within days, is the biggest fiscal stimulus package in modern American history, aimed at delivering critical financial support to businesses forced to shut their doors and relief to American families and hospitals.

Struck after midnight, the deal was the product of a marathon set of negotiations among Senate Republicans, Democrats and President Trump’s team that nearly fell apart as Democrats insisted on stronger worker protections and oversight over a new $500 billion fund to bail out distressed businesses.

The deal was completed after a furious final round of haggling between Steven Mnuchin, the treasury secretary, and Senator Chuck Schumer, Democrat of New York and the minority leader, after Democrats twice blocked action on the measure as they insisted on concessions.

Mnuchin and Eric Ueland, the White House legislative affairs director, were on Capitol Hill late on Tuesday and early Wednesday, shuttling between the Republican and Democratic leaders’ offices as they hammered out final details.

Senator Mitch McConnell, Republican of Kentucky and the majority leader, announced the deal on the Senate floor about 1.30am Eastern.

“At last, we have a deal,” he said, adding, “In effect, this is a wartime level of investment into our nation.”

Lawmakers and aides were still drafting portions of the bill early on Wednesday morning. “I’m hopeful that over the next few hours, we’ll finish what’s left and be able to circulate it early in the morning,” Ueland told reporters on Capitol Hill.

A vote was expected in the afternoon, McConnell said.

The compromise was a package whose sheer size and scope would have been unthinkable only a couple of weeks ago. Its cost amounts to several hundreds of billions of dollars more than the entire US federal budget for a year, and administration officials said they hoped that its effect on a battered economy would be exponentially greater, as much as $4 trillion.

“This is not a moment of celebration, but one of necessity,” Schumer said as he took careful note of the changes his party had secured in the legislation. “To all Americans I say, ‘Help is on the way.’”

The resulting measure is an attempt to sustain the workers and businesses that are losing income as vast sections of the American economy are shutting down under quarantine orders and to help the economy rebound quickly once the pandemic abates.

It includes direct support for companies large and small that have lost all or most of their customers in recent weeks, and direct payments to low- and middle-income families.

The package also includes measures meant to encourage companies to keep employees on their payrolls even if their businesses have shuttered temporarily — and it increases aid to workers who are laid off anyway or have had their hours and wages cut back.