One million empty chairs around the family dinner table — each irreplaceable. Irreplaceable losses, each leaving behind a family, a community forever changed because of this pandemic, says President Biden 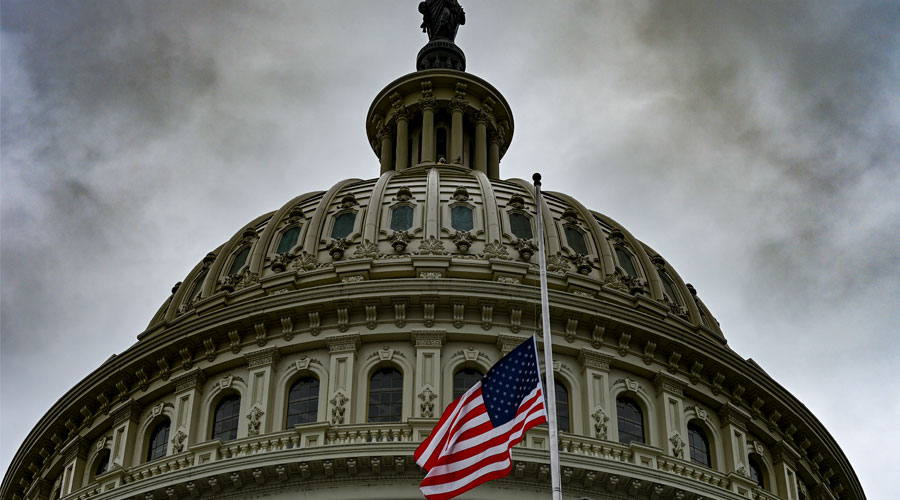 The American flag flies at half-staff to mark one million American lives lost to Covid-19 at the Capitol in Washington on Thursday, May 12, 2022. President Biden said in a formal statement that the United States must stay committed to fighting a virus that has “forever changed” the country.
(Kenny Holston/The New York Times)
Our Bureau   |   Published 13.05.22, 11:22 AM

The United States of America reached a tragic milestone in its battle against the pandemic on Thursday with the country recording 1 million Covid deaths.

“Today, we mark a tragic milestone here in the United States: one million Covid deaths,“ said President Joe Biden in remarks made at the Global Covid 19 Summit, according to the White House website.

“One million empty chairs around the family dinner table — each irreplaceable.  Irreplaceable losses, each leaving behind a family, a community forever changed because of this pandemic,” President Biden said.

Earlier, Biden also issued a proclamation Thursday ordering flags at the White House and all federal buildings to be flown at half-staff until next Monday to mark the 1 million deaths, The New York Times reported.

He said that the United States must stay committed to fighting a virus that has “forever changed” the country.

As of Wednesday, the federal Centers for Disease Control and Prevention had reported more than 995,000 coronavirus deaths in the United States; a New York Times database put the figure at more than 997,000. But with heads of state, leaders of philanthropies and drugmakers attending the virtual gathering, Biden was ready to mark the coming moment.

Biden’s remarks come a week after the WHO reported that 14.9 million people died around the world between January 1, 2020, and December 31, 2021 which is more than three times the official numbers published by governments globally that have calculated that the total deaths is slightly more than 5.4 million.

The WHO, according to figures released on May 5, estimates that a massive 4.7 million people died in India of Covid-19 or coronavirus-related illnesses between January 1, 2020, and December 31, 2021.

That contrasts with the Indian government’s calculation that its official death toll of 481,000 is the real number of deaths in the 24-month period. The WHO estimate goes against official claims that India was able to keep deaths at a very low level compared to other parts of the world.

The WHO figures indicate that one-third of the deaths globally took place in India, most of them during the catastrophic second wave of infections when hospitals ran out of oxygen, patients died in parking lots and crematoriums worked 24x7.

The government said it “strongly objected” to the WHO’s calculations. “Despite India's objection to the process, methodology and outcome of this modelling exercise, WHO has released the excess mortality estimates without adequately addressing India's concerns," the health ministry said.

Well into the pandemic’s third year, COVID-19 has become the third-leading cause of death among Americans, behind only heart disease and cancer. Its toll has extended deep into the lives of families across the United States. An estimated 250,000 children have lost parents or caregivers to COVID-19; of those, nearly 200,000 have lost one or both parents.

The pandemic has also defined the Biden presidency. Biden came into office vowing to conquer COVID-19, but hopes of achieving “herd immunity” through the combination of vaccination and exposure gave way to the harsh realization that vaccines’ protective power against infection could wane and that new variants made reinfection more common. Political divisions have thwarted mask and vaccine mandates.

Thursday’s meeting was an effort by the president to put COVID-19 back on the radar screen, both in the United States and around the globe. The White House has asked Congress for $22.5 billion in new emergency coronavirus aid, but the request is stalled on Capitol Hill, as is a compromise proposal for $10 billion in aid.