Did India help abduct the princess, fleeing from her father, and hand her over to the UAE authorities? 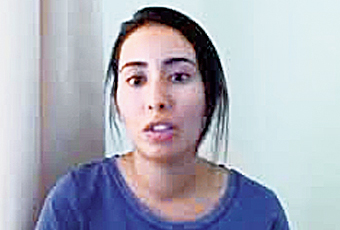 A UN body on enforced disappearances has communicated to India on the case of one of the Dubai ruler’s daughters who was allegedly abducted in March from a US-flagged yacht off the Indian coast while attempting to flee the United Arab Emirates.

The Human Rights Council’s Working Group on Enforced or Involuntary Disappearances believes that “Indian military and security services, as well as coastguards” helped abduct Princess Sheikha Latifa, 33, and handed her over to the UAE authorities.

The incident has sprung back to the spotlight after the UAE this week extradited Christian Michel, an alleged middleman in the AgustaWestland chopper scandal that the BJP has been using to target the Congress, to India.

Latifa is the daughter of Sheikh Mohammed bin Rashid al-Maktoum, ruler of Dubai and Prime Minister of the UAE. She had told friends she was effectively being held prisoner by her repressive father and wished to escape.

She fled across the border to Oman with the help of a friend before boarding a boat to meet French national Herve Jaubert, who had himself escaped the Emirates in 2010.

The boat sailed for the Indian coast but was intercepted by three Indian and two Emirati warships. Jaubert claimed he and his crew were beaten by commandos before Latifa was whisked away, according to British newspaper The Daily Telegraph.

The Geneva-based Working Group, in its August 16 report on “Communications, cases examined, observations and other activities”, said it had transmitted a copy of the case to India. It added: “Her fate and whereabouts remain unknown.”

Replying to an email from PTI, the Working Group said its “proceedings are confidential” and it could only share the information made public in its August 2018 report on the case.

Diplomatic sources here offered no comment on the case, saying it was being handled in Geneva.

The Dubai government said in a statement on Thursday that Latifa “is now safe in Dubai”.

“She and her family are looking forward to celebrating her birthday today, in privacy and peace, and to building a happy and stable future for her,” The Daily Telegraph quoted the statement as saying.

Rights group Human Rights Watch had in May said Tiina Jauhiainen, a Finnish citizen and former Dubai resident for 17 years, had told it she had met Latifa in 2010 and they became friends.

Jauhiainen said she and Latifa left the UAE on February 24. Later that day, they joined Jaubert on his private boat. On March 4, the boat stopped 50 miles off the coast of Goa.

“At around 10pm she and Latifa were below deck when they heard shouting and gunfire and locked themselves in the bathroom. The cabin filled with gas, forcing them onto the deck,” Human Rights Watch said.

Jauhiainen said she saw several boats around their boat. Men boarded their boat, pointed guns at her, forced her to the ground, and tied her hands behind her back, according to the HRW statement.

She said the men kept shouting in English, “Who is Latifa?”, adding that she later heard Latifa, whom she could not see, trying to break free and repeatedly shouting that she wanted to claim asylum.

She said the men removed Latifa from the boat, the statement said. It appeared that Jaubert and the crew had been mistreated, Jauhiainen said, describing Jaubert’s face as “bloody” and “unrecognisable”.

Jauiainen told Human Rights Watch that the Indian coastguard participated in the raid in coordination with the UAE authorities.

The Working Group was established by the then UN Commission on Human Rights in 1980 to assist families in determining the fate and whereabouts of disappeared relatives.