Which authors can still be read? Who can still perform there? And what exceptions exist? 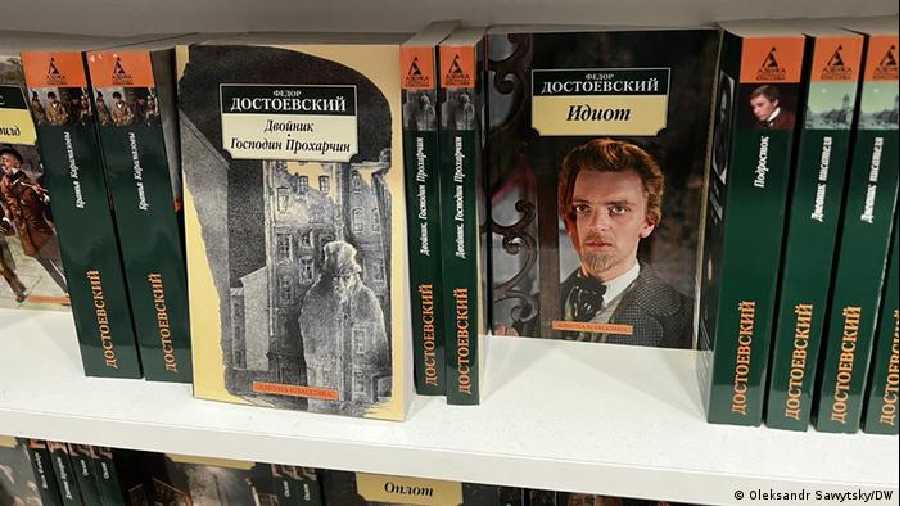 In the future, Russian literature will be available in Ukrainian bookshops only under certain conditions
Deutsche Welle
Deutsche Welle   |   Published 01.07.22, 10:50 AM

In Ukraine, it is now illegal to play Russian music in public or import large numbers of books from Russia and Belarus. The new ban passed by Kyiv's parliament covers "products from artists or authors who are or were citizens of the aggressor nation."  Artists who fit that bill are also prohibited from performing in Ukraine.

Ukrainian television presenter and film producer Ihor Kondratyuk collected more than 25,000 signatures for a petition banning concerts featuring Russian artists in Ukraine even before Russia's February 24 invasion. For him, the new law seems like a logical next step to protecting the country.

"It's just as much a part of defending Ukraine as what our fighters are doing in the struggle against the aggressor. Russian artists should be unwelcome in Ukraine until relations with Russia are once again friendly," he tells DW. The presenter adds that Russia's army has been using its artists as a type of vanguard since 2014, when it annexed Crimea and launched its invasion into the Donbas region.

Kondratyuk says streaming platforms and YouTube are registering heightened interest in Ukrainian-language content. The authors of the new ban point to that growing popularity as one of their motivations in writing the law but are quick to add that there are exceptions built into the legislation. They say, for instance, there are exemptions for Russian musicians who condemn Moscow's aggression toward Ukraine. Just which artists are exempted is to be determined by Kyiv.

No more books from Russia or Belarus

Another law was passed as well. Ukraine's parliament has determined that it is illegal to import and sell books from publishers in Russia or Belarus, as well as those in occupied parts of Ukraine.

The ban pertains not only to works written in any of those places but also applies to works by authors who are Russian citizens. Books published before the occupation are exempted from the ban.

Russian-language literature published in other countries, however, may still be imported as long as it has been approved.  According to the law, a new literary council of experts will first scour works looking for anti-Ukrainian propaganda.

In addition, books by authors who hold or held Russian passports can no longer be printed in Ukraine. "That, too, is a natural societal reaction to the war. Neither 'good' nor 'bad' Russians will be given access to the Ukrainian book market," says Oleksandr Krasovytsky — owner and director of Folio Publishers — who helped write the law. The publishing ban will not, however, apply to Russian-language books that are to be published in Ukraine before January 1, 2023.

How will the ban be enforced?

That ban is focused, above all, on authors with Russian passports, says Krasovytsky. The publisher says Ukraine's council of experts will review each case individually. According to the law, works by Alexander Pushkin or Leo Tolstoy, for instance, can no longer be imported into Ukraine if they are printed in Russia; but if they are printed in other countries they may.

That means things will become complicated for some authors in the future — authors like Boris Akunin, who no longer lives in Russia but still has a Russian passport. His works can no longer be imported. But that rule applies only to his works printed in Russia; those printed elsewhere and found by the council of experts to be free of anti-Ukrainian propaganda can still be imported.

There are also import exceptions for private individuals. Those who are carrying fewer than 10 copies of a work not on the council of experts' list of banned books and having no intention of selling these are free to bring them into the country.

Moscow's reaction to the law was predictable — anchoring the Ukrainian language in everyday life is a violation of the rights of Russian-speaking Ukrainians, according to the Kremlin.

The next step could be banning classic Russian literature from Ukrainian classrooms. An Education Ministry working group has already advised striking some 40 Russian or Soviet authors and poets — among them Leo Tolstoy, Alexander Pushkin, Fyodor Dostoyevsky and Michail Bulgakov — from school curricula. Authorities have yet to issue a final decision on the matter.

Author Rostyslav Semkiv supports striking Russian literature from lesson plans entirely. "At the moment, I really don't see how we can excite pupils about the beauty of Russian poetry. Classrooms are full of children whose homes have been destroyed, who have been forced to flee, have been shot at, or who have lost relatives," said Semkiv while speaking on Ukrainian television. German literature did not return to Soviet classrooms until 1960, for instance, 15 years after victory over Nazism. Goethe's "Faust" was the first to reappear.

Andriy Hirnyk, professor of psychology and pedagogy at the National University of Kyiv Mohyla Academy, says Russian literature and culture had an outsized presence in Ukraine before the invasion. Now, he says, greater importance will simply be given to English, German, French, Chinese and Ukrainian literature.