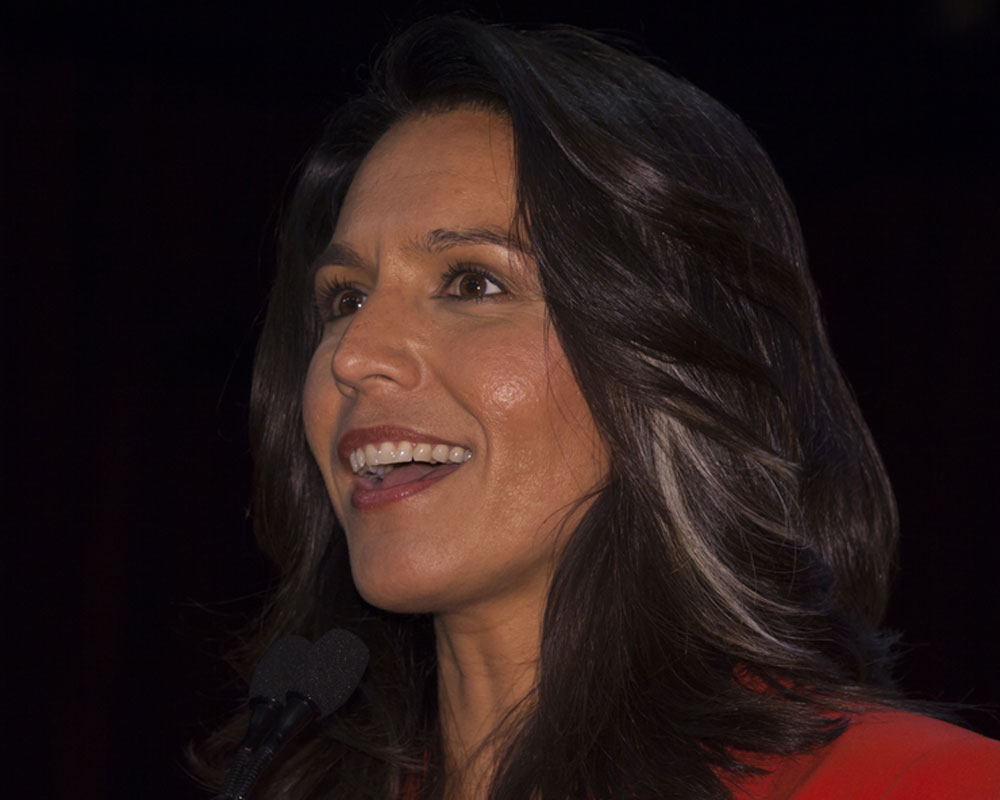 Gabbard is highly popular among Indian-Americans, a constituency she has nurtured from the beginning of her political career.
Shutterstock
PTI   |   Washington   |   Published 12.11.18, 08:38 PM

Tulsi Gabbard, the first Hindu lawmaker from Hawaii in the US Congress, is considering a run for the American presidency in 2020, according to sources.

On Friday, at a Medtronic conference in Los Angeles an eminent Indian-American Dr Sampat Shivangi introduced Gabbard, 37, and said that she could be the next President of the US in 2020. The brief statement was marked by a standing ovation in the presence of the four-term Congresswoman from Hawaii.

Gabbard, a Democrat who addressed the gathering, however, neither confirmed or denied that she is running for President in 2020.

A decision on this could be taken before Christmas, which might not necessarily result in a formal announcement as that could be delayed till the next year, people familiar with her thinking process said.

However, it is said that she and her team has quietly been reaching out to prospective donors, including a large number of Indian Americans, and volunteers to build an impressive campaign for her 2020 run.

Given that Gabbard is highly popular among Indian-Americans, a constituency she has nurtured from the very beginning of her political career, it is but natural that her team has quietly started reaching out to this community, which is considered the richest ethnic group after Jewish Americans. In many critical States, Indian Americans can play an important role for her.

Gabbard is not Indian. She was born in American Samoa to a Catholic father (Hawaii State Senator Mike Gabbard) and her mother, Carol Porter Gabbard, is of Caucasian descent who practices Hinduism. Gabbard moved to Hawaii when she was two and embraced Hinduism as a teenager and is well-versed in the scriptures.

If Gabbard declares her presidential bid she would be the first Hindu candidate ever from a major party to announce to enter the race for White House. And if elected in 2020, she could be the youngest ever and first woman to be elected as the US President.

A Democrat, Gabbard last week was elected for the fourth time at the US House of Representatives.

Notably, Dr Shivangi is a Republican and has been the party’s delegate for the past several presidential conventions. However, he had held fundraisers for Gabbard when she ran for the Congress for the first time in 2012. She was the first US lawmaker to take her oath on the Bhagwat Gita.

A former vice-chairman of the Democratic National Committee, Gabbard currently serves on powerful House Armed Services Committee and House Foreign Affairs Committee. She is also the Democratic co-chair of the Congressional India Caucus.

The 2020 presidential primary cycle is scheduled to kick off from the Iowa Caucuses on February 3, 2020, followed by the New Hampshire Primary on February 11, Nevada caucus of February 15 and South Carolina on February 22. Team Tulsi has been reaching out to people in these four states.

President Donald Trump is all set to seek his re-election in 2020, none of the Democratic candidates have announced their bid yet. The Democratic race is expected to be crowded by the summer of 2019.

Amid the clamour of Trump headlines and focus on higher-profile candidates, Gabbard has been quietly making the traditional moves of a presidential candidate. She recently visited Iowa, where locals urged her to run for President, according to the Iowa City Press-Citizen.

She keynoted a progressive gathering in New Hampshire in September. And she’s writing a book due out in spring titled, Is Today the Day?: Not Another Political Memoir, Politico reported last month.