Advertisement
Home / World / Teacher to techie, none spared in Myanmar

Teacher to techie, none spared in Myanmar

The UN Human Rights Office said at least 18 people had been killed and 30 wounded on Sunday, bringing the total number of protesters killed to at least 21 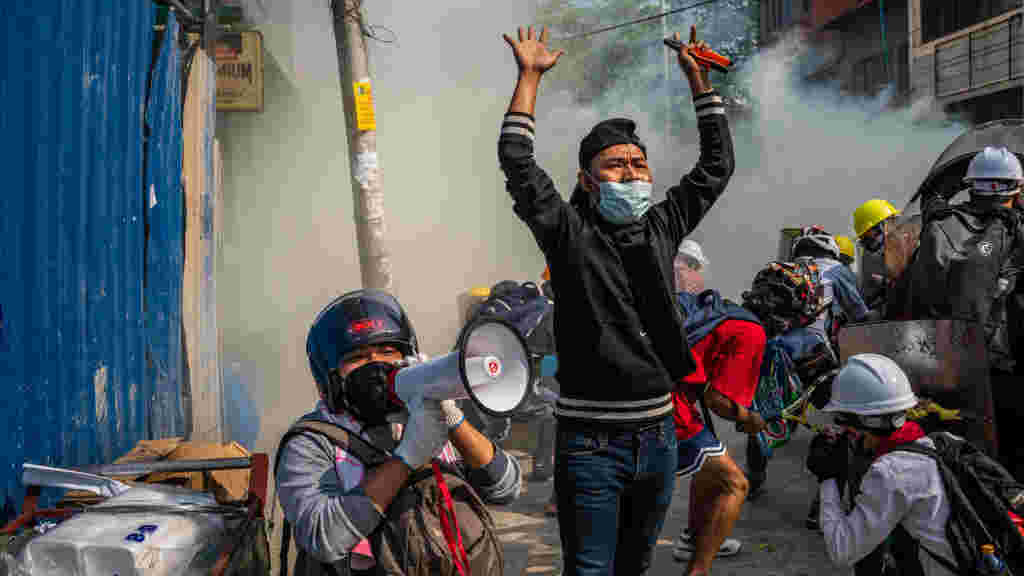 The day before he was killed, Internet network engineer Nyi Nyi Aung Htet Naing had posted on Facebook about the increasingly violent military crackdown on pro-democracy protests in Myanmar.

“#How_Many_Dead_Bodies_UN_Need_To_Take_Action” he wrote, in reference to the United Nations.
He was among the first shot dead in Myanmar’s biggest city of Yangon on Sunday, the bloodiest day since the February 1 coup prompted daily protests against the junta and to demand the release of elected leader Aung San Suu Kyi.

The United Nations Human Rights Office said at least 18 people had been killed and 30 wounded on Sunday, bringing the total number of protesters killed since the coup to at least 21. The army says one policeman has died in the unrest.

With daily protests and strikes paralysing a country where the army had promised to bring order, soldiers and the police intensified their crackdown during the weekend.

Video from an apartment above records the sound of gunshots as Nyi Nyi lies slumped outside the gate of the Kamaryut township high school — dressed in a check shirt and with a builder’s white hard hat, his phone in his hand.

Several protesters sprint past the body before five gain courage to carry him away, crouching as they run, the video from website Myanmar Now that was republished by Reuters shows.

It was too late to save him.

A UN official speaking on condition of anonymity said Nyi Nyi was one of at least five killed people in Yangon. One had been shot in the eye. A middle school teacher died of a suspected heart attack from a stun grenade blast, her colleagues said.

The teachers tried to assemble early, but the police threw stun grenades and charged in to break up the protest.

“Many were wounded. I have no weapon. I just came here to protest peacefully. Whatever they do, we just have to take it,” said teacher Hayman May Hninsi.

Across the country, protesters wearing plastic work helmets and with makeshift shields faced off against the police and soldiers in battle gear, including some from units notorious for tough crackdowns on ethnic rebel groups in Myanmar’s border regions.

In the coastal town of Dawei, security forces opened fire on demonstrators in the middle of the road, witnesses said.

Video footage shared on social media shows a protester clad in jeans and flip flops lying motionless after the crowd scatters. Soldiers walk past the body and begin beating another protester.

One front-line reporter posted on Facebook that the police had told people they were not shooting because they had been ordered to.

“We shoot because we want to. Get inside your homes if you don’t want to die,” she quoted one as shouting.

Yangon echoed to the sound of stun grenades and rubber bullets and the occasional zip of a live round.
Despite the crackdown, protesters moved to different districts, setting up roadblocks with wheeled garbage bins, lighting poles and concrete blocks.

Some held riot shields homemade from tin sheet and stencilled with the word “PEOPLE” to contrast with those labelled “POLICE”.

Protesters wrote their blood group and a contact number for next of kin on their forearms in case they were wounded.

Until nightfall, demonstrations flared and subsided.

In the southern city of Dawei, the police opened fire on a crowd of hundreds, witnesses told The New York Times. At least three people were killed and more than 50 wounded, said Dr Tun Min, who was treating the injured at a hospital.

Doctors in Mandalay confirmed three fatal shootings there, and killings also took place in Yangon and the city of Mawlamyine. A United Nations statement said it had reports of deaths “as a result of live ammunition fired into crowds” in Yangon, Mandalay and Dawei, as well as in the cities of Myeik, Bago and Pokokku.

In Mandalay, Myanmar’s second largest city, one protester, U Maung Maung Oo, died after being shot in the head through his motorcycle helmet as he was fleeing police officers and soldiers. Two others were shot and wounded.

U Si Thu, a doctor and a protester, said he and the three victims were among a group of about 50 who were trying to escape police officers and soldiers, who broke up their planned anti-regime protest before it could start.

“I don’t know where the bullet came from, but the man was shot in the forehead and went down,” Dr Si Thu said in an interview. A video of the scene posted on Twitter showed several men carrying the victim to an ambulance as blood from his wound dripped onto the ground.

Minutes after the ambulance left, an army truck stopped at the end of the street and soldiers opened fire on the group, Dr Si Thu said. That was when the other two men were wounded, one in the chest and one in the arm.

Mr Maung Maung Oo was taken to the Byamaso Social Association Hospital, where he died, said U Zar Ni, a doctor there. U Lei Lei, another doctor at the hospital, said a second protester also died there from a gunshot wound.

Later, after protesters in Mandalay had largely dispersed, a woman was shot in the head and killed as the police and soldiers cleared barricades and fired at people in the streets, apparently at random, a witness said.

In Yangon a protester named Hein Htut Aung, 23, was shot and killed at a demonstration in Thingangyun Township.

As teachers gathered to demonstrate at another protest site in Yangon, the police began firing tear gas and rubber bullets near them, and a primary-school teacher identified as Daw Tin Nwet Yi died of a heart attack, a witness said.

The police also arrested at least 185 medical students in Yangon as they were preparing to march in their white coats in a separate protest, witnesses said. Doctors have been at the forefront of the civil disobedience movement.

As the police prepared to take the medical students away in trucks, neighbours poured into the streets and blocked the vehicles. But the police eventually pushed their way through.

State television announced on Saturday that Myanmar’s UN envoy had been fired for betraying the country, after he urged the United Nations to use “any means necessary” to reverse the coup.
The ambassador, Kyaw Moe Tun, remained defiant. “I decided to fight back as long as I can,” he told Reuters in New York.