Tributes for Queen Elizabeth II have been pouring in from musicians, writers, actors — and even a famous bear 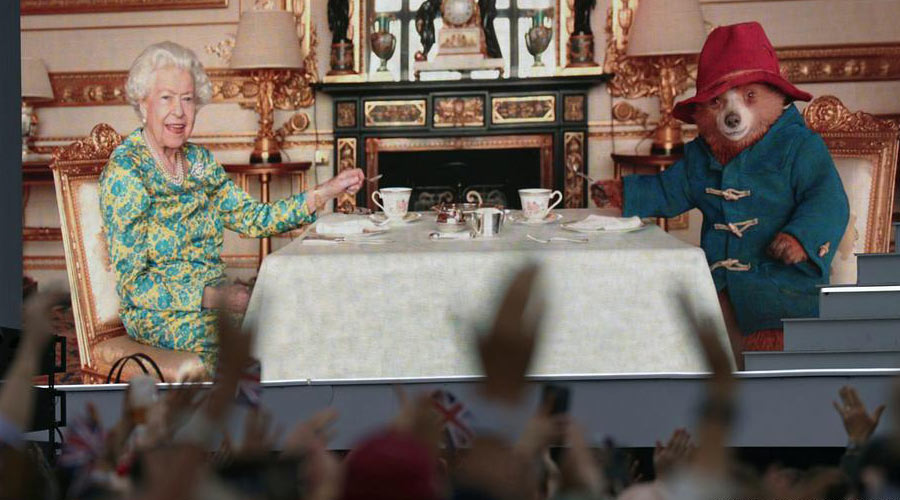 The world is mourning the death of Queen Elizabeth II, with tributes pouring in from musicians, writers, actors — and even a famous bear.

Beyond her role as a monarch, Queen Elizabeth II was a pop culture icon who met (and knighted) acting and music legends. Many stars have been reacting to the news of her death.

Rolling Stones frontman Mick Jagger wrote that Queen Elizabeth II had been in his life forever, tweeting that he remembered her from the time she was "a beautiful young lady, to the much beloved grandmother of the nation."

Sir Michael Phillip Jagger was knighted in 2003 at Buckingham Palace for his 40 years of service to popular music.

For my whole life Her Majesty, Queen Elizabeth II has always been there. In my childhood I can recall watching her wedding highlights on TV. I remember her as a beautiful young lady, to the much beloved grandmother of the nation. My deepest sympathies are with the Royal family. pic.twitter.com/3JLILZDKwK

Another knighted British singer, Elton John, also shared the sentiment that she was "a huge part" of people's lives from childhood on.

The pianist and composer remembered Queen Elizabeth as "an inspiring presence to be around," adding in his tweet that he would "miss her dearly."

A longtime friend of Princess Diana, to whom he dedicated a rewritten version of his hit song "Candle in the Wind" after her death in 1997, Sir Elton John was knighted at Buckingham Palace in 1998.

US singer and actress Barbra Streisand posted a photo of herself shaking hands with the queen. They met at the Royal Film Performance of "Funny Girl" in 1975.

"She was a constant for us all," Streisand tweeted.

Sad to hear about the passing of Queen Elizabeth II. She was a constant for us all. Respected around the world. May she rest in peace. Barbra. pic.twitter.com/LCizXL0u1N

US actress and producer Whoopi Goldberg recalled her meeting with the British monarch in 2009. She remembers being "in awe," considering that she was simply "an American kid from the projects" who was suddenly in the "company of the Queen of England."

Bette Midler, who also appeared in the 2009 Royal Variety Performance, the annual British charity event attended by Queen Elizabeth II, noted that she was "steadfast, staunch, and dedicated until the very end," adding in her tweet: "70 years of duty. Unbelievable."

Former Beatle Paul McCartney, who was knighted in 1997, shared a brief tribute to the queen, while also looking ahead to her son's reign on the throne with the words: "Long live The King."

Monthly US fashion and lifestyle magazine Vogue shared a tribute on Instagram. British editor-in-chief Anna Wintour, who in 2017 was appointed Dame Commander of the Order of the British Empire by Queen Elizabeth II for her contributions to fashion and journalism, posted a photo of them together at the fashion show of designer Richard Quinn, where the queen was presenting an award in her name.

Even though Wintour left England for the US long ago, she remained a fan. "The admiration and respect I felt for her has never diminished. I'm not alone in that regard: the queen touched everyone," she wrote.

Also appointed Dame Commander of the Order of the British Empire for her services to drama in 2003, Helen Mirren is perhaps the person who came the closest to wearing Queen Elizabeth's shoes. Her portrayals of the British monarch in the 2006 biographical drama movie "The Queen," as well as in the Broadway version of the film, were crowned with awards.

She wrote on Instagram that she was "proud to be an Elizabethan," describing the queen as "the epitome of nobility."

Meanwhile, Peter Morgan, screenwriter of "The Queen" and of the successful Netflix series "The Crown," has said he expects filming of season six of the historical drama will pause, "out of respect."

"'The Crown' is a love letter to her and I've nothing to add for now, just silence and respect," he told Hollywood news site Deadline in an email. The series covers the reign of Queen Elizabeth II, from her wedding to Philip, Duke of Edinburgh, in 1947, up into the 21st century.

In a video for her Platinum Jubilee in June, they shared tea together and revealed to each other that they both loved marmalade sandwiches. The queen said she always had her own supply in her iconic handbag.

Paddington's tweet, one of the most popular tributes on Twitter, simply repeats a touching line from that video: "Thank you, Ma'am, for everything."

Thank you Ma’am, for everything.