Shelling does not spare Sievierodonetsk civilians 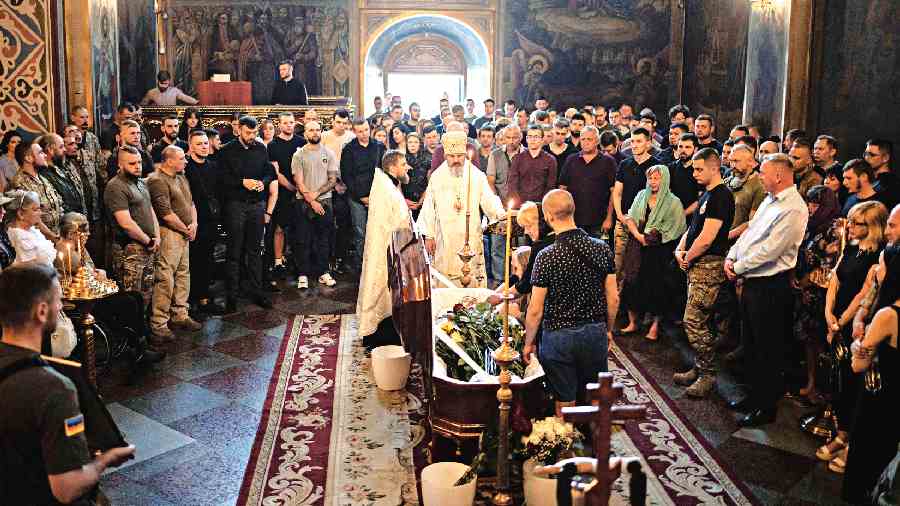 Family and friends at a memorial service for Ukrainian serviceman Ivan Chekaniuk, who died during a combat mission in Sievierodonetsk, at St Michael’s Golden-Domed Cathedral, Kyiv.
Reuters
Reuters   |   Kyiv   |   Published 14.06.22, 01:08 AM

Russian forces swarmed into the eastern Ukrainian city of Sievierodonetsk and pounded a zone where hundreds of civilians were sheltering, a Ukrainian official said on Monday — a scene that mirrored Moscow’s brutal assault on Mariupol last month.

Pro-Moscow separatists claimed the last bridge out of Sievierodonetsk had been destroyed and Ukrainian defenders there must now surrender or die. Ukraine said there was still another way out although it was severely damaged.

Ukraine has issued increasingly urgent calls for more western weapons to help defend Sievierodonetsk, which Kyiv says could hold the key to the outcome of the battle for control of the eastern Donbas region and the future course of the war.

“The battles are so fierce that fighting for not just a street but for a single high-rise building can last for days,” he said on social media.

Russian forces now controlled about 70 per cent of Sievierodonetsk, he said, and were destroying it “quarter by quarter” in one of the bloodiest assaults since they launched their invasion on February 24.

“Russians continue to storm the city, having a significant advantage in artillery they have somewhat pushed back the Ukrainian soldiers,” Gaidai, who is governor of the Luhansk region that includes Sievierodonetsk, said on Monday.

Russian artillery fire pummelled the Azot chemical plant, where hundred of civilians were sheltering, he said.

“About 500 civilians remain on the grounds of the Azot plant in Sievierodonetsk, 40 of them are children. Sometimes the military manages to evacuate someone,” he said, noting the lack of a ceasefire agreement or agreement on evacuation corridors.

Gaidai said the twin city of Lysychansk across the Siverskyi Donets river to the west was also being shelled by Russian forces, and a six-year-old child had been killed there. Reuters could not independently confirm that account.

Russia’s RIA news agency quoted a pro-Moscow separatist spokesperson, Eduard Basurin, as saying the last bridge over the river linking the two cities had been destroyed on Sunday.

Ukrainian troops were effectively blockaded in Sievierodonetsk and should surrender or die, Basurin said.

Gaidai also said one crossing was destroyed on Sunday, but there was still another “half destroyed” bridge remaining, though it could not be used for heavy vehicles.