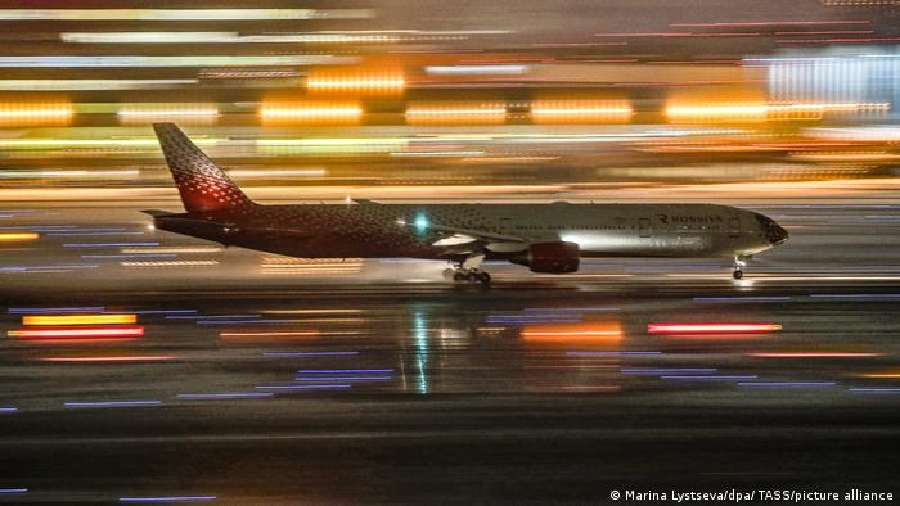 The US warned that flights in and out of Russia could be increasingly difficult to find.
Deutsche Welle.
Deutsche Welle   |   Published 28.02.22, 07:41 AM

The US State Department has also told its citizens not to travel to Russia.

Brazilian President Jair Bolsonaro has decided to not condemn Russia's invasion of Ukraine and instead as opted for neutrality.

The right-wing populist leader said he had talks with Russian President Vladimir Putin on the phone where he discussed Brazil's position.

The two leaders had met earlier in the month for talks in Moscow. At a press conference on Sunday Bolsonaro said: "We will not take sides, we will continue being neutral, and help with whatever is possible."

The United Nations Security Council on Sunday called to hold a special session of the General Assembly as a result of Russia's invasion of Ukraine.

The emergency session will be held on Monday and affords members of the global body an opportunity to express their views on the crisis.

Russia did not have the power to veto the move due to it being a procedural action falling under a 1950 resolution called "Uniting for Peace."

The emergency session was adopted with 11 yes votes, to Russia's no vote.

Russian carrier Aeroflot said it is cutting off flights to all European destinations.

The airline said that fellow Russian carrier Rossiya Airlines would also be impacted, and gave an explanation for the decision on Twitter.

"Due to the closure of the airspace of a number of European countries, Aeroflot cancels flights and suspends flights from Moscow and St. Petersburg (including flights operated by Rossiya Airlines) to a number of destinations," Russia's flag carrier tweeted.

A number of European countries have taken the decision to bar Russian aircraft from their airspace, including Germany, Italy, Iceland, the Netherlands, the UK and most Eastern European EU member states.

Tsikhanouskaya: Lukashenko 'shares the responsibility' for the invasion

"Lukashenko shares the responsibility for the invasion of Ukrainian territory," she said, noting that the regime was hosting Russian troops which are used to invade Ukraine.

"I think that Lukashenko is not controlling our territory anymore. He's like the Kremlin's vassal, and he has to show his loyalty for the support he got after the fraudulent elections," Tsikhanouskaya said.

At the same time, ordinary people in Belarus were protesting against the war, according to the exhiled politician.

The G7 group of top industrialized nations warned Moscow that it could face additional sanctions if the war in Ukraine continues.

Foreign ministers from Canada, France, Germany, Italy, Japan, the United Kingdom, and the United States also agreed on Sunday that any Russian military gains in Ukraine would not receive international recognition.

BP did not detail how it would exit its stake but said it expected to write off a total $25 billion at the end of the first quarter. Rosneft accounts for around half of BP's oil and gas reserves and a third of its production.

Following Russia's invasion of Ukraine, BP's chief executive Bernard Looney announced he was resigning from the Russian energy company's board "with immediate effect." Looney's predecessor as CEO, Bob Dudley, is also stepping down from the Rosneft board.

"I have been deeply shocked and saddened by the situation unfolding in Ukraine and my heart goes out to everyone affected. It has caused us to fundamentally rethink bp's position with Rosneft," Looney said in a statement on Sunday.

BP operated in Russia for over 30 years.

After just four days, Russia's war on Ukraine has displaced over 7 million people as Ukrainians flee their homes for other relatively safer parts of the country or leave Ukraine, European Commissioner for Humanitarian Aid and Crisis Management Janez Lenarcic told reporters.

"We are witnessing what could become the largest humanitarian crisis on our European continent in many, many years," Lenarcic said.

The European Commission announced it would propose rules to help Ukrainian refugees. The proposal, expected to be presented Thursday, would allow displaced persons to receive immediate temporary protection without a drawn-out asylum procedure.

EU Home Affairs Commissioner Ylva Johansson said she does not know how many people will come but that the 27-memberbloc should "prepare for millions."

Hundreds of thousands of Ukrainians have come to the EU because of the Russian war against Ukraine, she said.

Sweden has said it would send anti-tank launchers, field rations, helmets and body armor to Ukraine.

The move is a break from a longstanding policy of not arming nations in an active conflict. Sweden last sent weapons to a country in an armed conflict when the Soviet Union invaded Finland in 1939.

In Denmark, Prime Minister Mette Frederiksen said the country would donate up to 2,700 anti-tank weapons to Ukraine.

Over 2,000 anti-war protesters arrested in Russia

Anti-war activists took to the streets across Russia to protest the country's invasion of Ukraine and the bloody war in its fourth day there.

Protests on Sunday were smaller than earlier demonstrations, which saw hundreds of people detained by riot police.

Police on Sunday detained more than 2,000 people at anti-war protests that occurred in 45 Russian cities, according to OVD-Info, a group that counts participation in opposition protests. The group said about 5,250 people have been detained at protests since the war began four days ago.

In Moscow and St. Petersburg, many people went to memorials for Boris Nemtsov, a top Russian opposition figure who was shot dead near the Kremlin on February 27, 2015.

Ukrainian President Volodymyr Zelenskyy said he was willing to "try" talks with Russia but added he is "skeptical" they will lead to a ceasefire.

"I will be honest, as always: I do not really believe in the outcome of this meeting, but let them try," Zelenskyy said in a video statement.

If there was a "chance" to end the war, he should take part in the talks, he added.

For the first time in its history, the European Union will purchase weapons for a country under attack, said European Commission President Ursula von der Leyen.

In a meeting on Sunday, EU foreign minister agreed to budget €450 million ($502 million) for weapons and equipment for Ukraine. Poland agreed to work as a logistic hub for the delivery of weapons.

She also said EU airspace would be closed to Russia-owned, registered or controlled aircraft, explicitly mentioning that the ban would apply to "the private jets of oligarchs."

Additionally, von der Leyen announced the 27-member bloc would take steps to stop "the Kremlin's media machine in the EU" by banning state-owned Russia Today, Sputnik and their subsidiaries.

"We are developing tools to ban their toxic and harmful disinformation in Europe," she said.

EU foreign policy chief Josep Borrell said the move was aimed at "turning off the tap for Russia's disinformation in Europe."

In addition to the measures against Russia, von der Leyen added that the EU agreed to sanction Russia's ally Belarus, which she called "the other aggressor in this war."

In a message to the hundreds of thousands of people fleeing Ukraine, von der Leyen said they would be welcomed with "open arms."

Germany advises against travel to Russia

The German Foreign Ministry on Sunday advised Germans against traveling to Russia. It also warned people not to travel to the southern Russian areas that border Ukraine.

The Foreign Ministry also noted that travel to and from Russia was increasingly difficult as several countries, including Germany, close their airspace to Russian flights and airlines stop flying to Russian airports.

Russian oligarchs Oleg Deripaska and Mikhail Fridman called for an end to the invasion of Ukraine.

Fridman, who was born in western Ukraine, called it a tragedy for both Russia and Ukraine. In a letter to his staff, he wrote that the war was creating divisions between Russians and Ukrainians who he said have been brothers for centuries.

He wrote, "My parents are Ukrainian citizens and live in Lviv, my favorite city."

Deripaska posed on Telegram a message calling for peace talks "as fast as possible." On February 21, Deripaska incorrectly surmised there would be no military conflict.

Former Russian military officer Konstantin Eggert says he had "trouble discerning" what Putin meant when he said nuclear forces are on higher alert.

"The expression he used to indicate some heightened state of alert does not exist in Russian military manuals," Eggert, DW's Russia affairs analyst, told our TV channel.

There are four levels of alert in the Russian military, Eggert explained. Those four levels are: regular, heightened, threat of war and full or complete.

Mevlut Cavusoglu, Turkey's foreign minister, said during a live interview on CNN Turk that Turkey would implement the 1936 Montreux Convention, limiting the passage of Russia's warships through the Dardanelles and the Bosphorus straits.

The Montreux Convention gives Turkey control of the two waterways and permits it to cut off access to warships during wartime or if threatened. The two waterways connect the Mediterranean and Black seas.

Earlier Sunday, NATO member Turkey called the Russian invasion of Ukraine a "war," a shift that made it possible to block Russia's battleships.

Following a phone call with Belarusian strongman Alexander Lukashenko, Zelenskyy's office said he is ready to send a delegation to a meeting on the Belarusian-Ukrainian border near the Pripyat River.

Belarus leader Lukashenko assured Zelensky that "all planes, helicopters and missiles stationed on Belarus territory will remain on the ground during the travel, negotiations and return of the Ukrainian delegation," according to Kyiv.