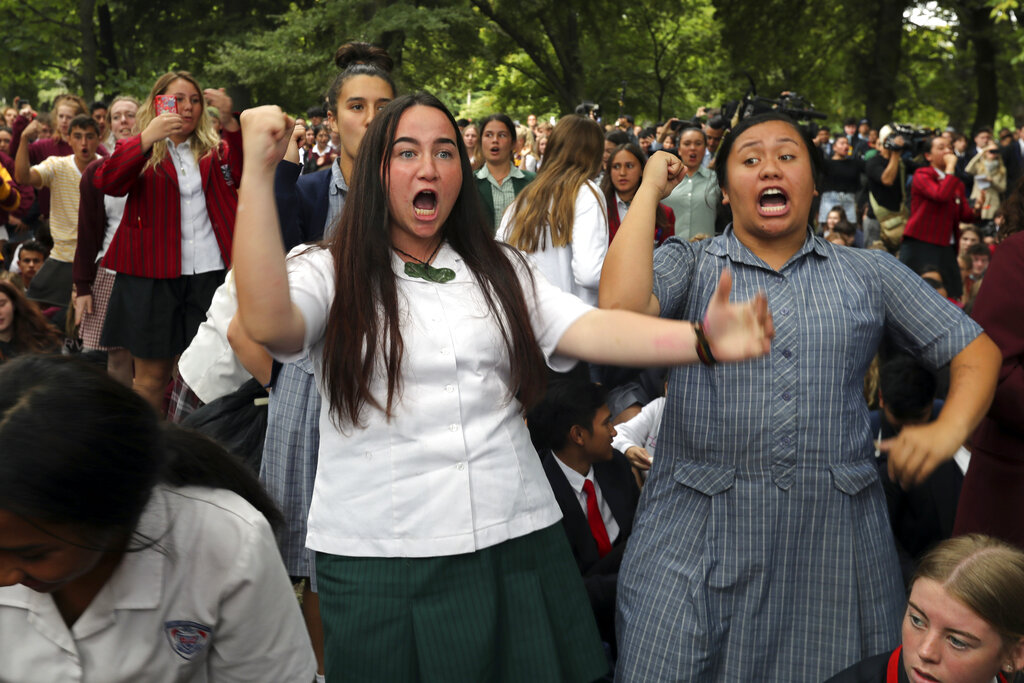 Their voices have thundered across this heartsick city, in parks and at flower memorials and schools. Day after day, the students of Christchurch have gathered, feet smashing the ground in unison as they chant the words of their nation's indigenous people in an outpouring of grief and love and support.

In the aftermath of last week's deadly shooting spree on two mosques blamed on a white supremacist, the young people of Christchurch have found solace in an old tradition: a Maori ceremonial dance called the haka.

To much of the world, the haka is largely associated with New Zealand's rugby team, the All Blacks, who perform it before games. That has led to a misconception that it is solely a war dance meant to inspire fear. But though it may have started out that way, the haka has evolved to mean so much more.

'Whenever I haka, I feel like I am from the tribe, standing with them — that all their spirits are with us,' said high school student Georgia Horiana Myers Meihana, after she and her classmates finished reciting a karakia, or Maori prayer, at a flower memorial. 'To us, it doesn't feel like we're just shouting words.'


Whenever I haka, I feel like I am from the tribe, standing with them — that all their spirits are with us.
- High school student Georgia Horiana Myers Meihana


Millions around the world have viewed videos of the students' hakas over the past week, with many people commenting that they have been moved to tears, even if they don't understand what the Maori words mean. Such a reaction is not surprising, says Tapeta Wehi, founder of the New Zealand performance group The Haka Experience.

'I've performed haka around the world, and that's normal,' Wehi says. 'I remember performing it in Germany, and I had these big German guys coming up to me with tears in their eyes, wondering why they're crying. It's the inner spirit that we portray.'

Though hakas were traditionally performed by the Maori people in preparation for battle, they are not all about war, Wehi says. Hakas are performed to celebrate and to mourn, and are often part of important events such as funerals or 21st birthdays. In the aftermath of the shootings, Wehi says, people across New Zealand have performed hakas to show support and respect for the victims and their families.

For the students, the haka has served as a powerful form of healing after a harrowing week in which they lost friends and the sense of safety that came from living in a nation previously largely immune to mass gun violence. Many New Zealand students learn how to perform hakas in school. Some schools have hakas specifically written for them; other schools teach traditional hakas.

On Monday, more than a thousand students gathered for a vigil in the park across from one of the mosques that was attacked. White and Maori, Catholic and Muslim, they stood and performed a haka that held a particularly poignant meaning: It is the haka used by Cashmere High School, which lost two students in the attack.

This haka, called Tahu Potiki, comes from the South Island Maori tribe Ngai Tahu, said Cashmere High Principal Mark Wilson. Tahu Potiki was an ancestor of Ngai Tahu, and the haka calls for his descendants to rise and claim their place in the new day, Wilson said. Being part of a haka group can be a powerful emotive moment, he said, one in which people are left uplifted and strengthened.

In some ways, the students' response to the attacks has been similar to the aftermath of last year's mass shooting at a school in Parkland, Florida, where it was the voices of the youth that rose above the din. The students of Parkland — around 30 of whom actually visited Christchurch last year — united to demand gun law reform. In Christchurch, the students have united in an utter rejection of the intolerance spewed by the white supremacist accused of the massacre.

'It melts my heart,' 15-year-old Seraphim Tempest said after joining in Monday's performance of the Tahu Potiki. 'It's just showing that everyone's the same here and we accept everyone.'

Students perform the Haka during the New Zealand Prime Minister Jacinda Ardern's visit to a high school in Christchurch.
AP

Prime Minister Jacinda Ardern has encouraged students to turn to the haka in the wake of the attacks, particularly if they are struggling to express themselves.

'Never underestimate the power of just sending a message, looking out for someone, performing a haka,' Ardern told students at Cashmere High after they performed the Tahu Potiki for her during a visit on Wednesday. 'There is power in that, because in doing that, you are sending a message of solidarity and of support.'


Never underestimate the power of just sending a message, looking out for someone, performing a haka.
- Jacinda Ardern


Fourteen-year-old Rayhan Satriawan was born in Indonesia, but later moved to New Zealand. Two of his friends were killed in the attack, something he is still struggling to understand. He hopes the message behind the students' hakas will carry beyond Christchurch to the rest of the world — that no matter how different people seem, he says, 'we are one.'

'I want to stay strong,' he says. 'Everything that I do in my life is going to be on behalf of the people who have died.'

And when the students stood to perform the Tahu Potiki at their vigil on Monday, their strength was clear in every stamp of their feet, every slap of their chest. Together, they roared:

RISE UP! RISE UP!