Advertisement
Home / World / Riddle: Why virus hits some and spares others

Riddle: Why virus hits some and spares others

Global metropolises like New York, Paris and London have been devastated, while teeming cities like Bangkok, Baghdad, New Delhi and Lagos have, so far, largely been spared 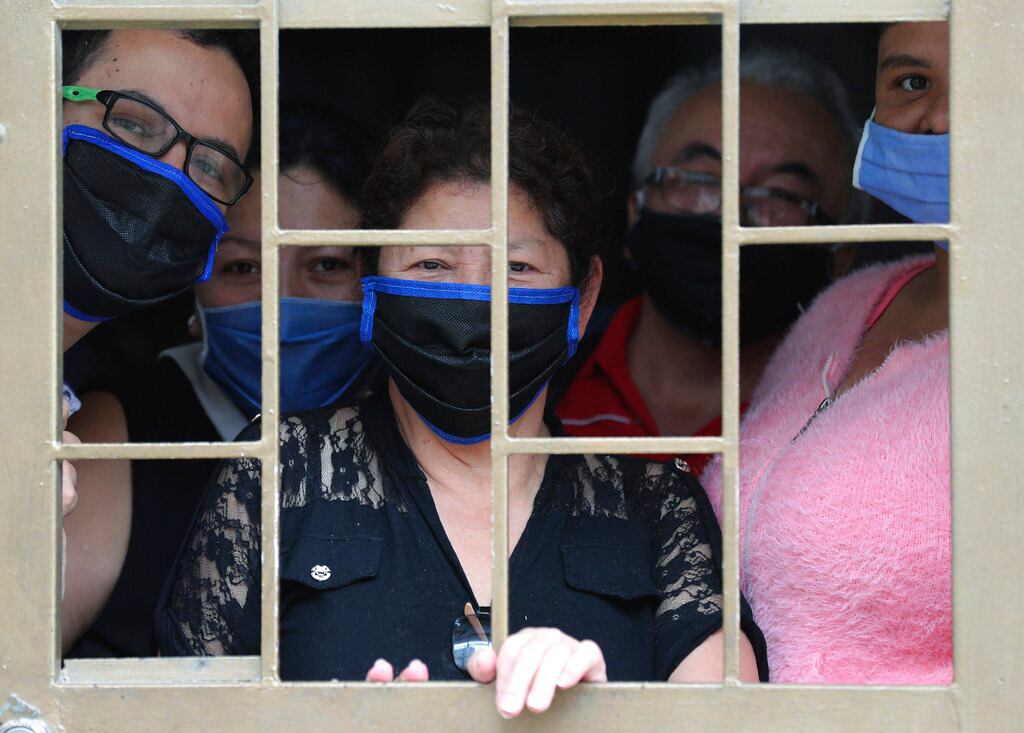 A family peers from their home's window before receiving boxes of free food during a lockdown to prevent the spread of the new coronavirus in Bogota, Colombia, Monday, May 4, 2020.
(AP)
Hannah Beech, Alissa J. Rubin, Anatoly Kurmanaev And Ruth Maclean/ NYTNS   |   New York   |   Published 04.05.20, 07:09 PM

The coronavirus has killed so many people in Iran that the country has resorted to mass burials, but in neighbouring Iraq, the body count is fewer than 100.

The Dominican Republic has reported nearly 7,600 cases of the virus. Just across the border, Haiti has recorded about 85.

In Indonesia, thousands are believed to have died of the coronavirus. In nearby Malaysia, a strict lockdown has kept fatalities to about 100.

The coronavirus has touched almost every country on earth, but its impact has seemed capricious. Global metropolises like New York, Paris and London have been devastated, while teeming cities like Bangkok, Baghdad, New Delhi and Lagos have, so far, largely been spared.

The question of why the virus has overwhelmed some places and left others relatively untouched is a puzzle that has spawned numerous theories and speculations but no definitive answers. That knowledge could have profound implications for how countries respond to the virus, for determining who is at risk and for knowing when it’s safe to go out again.

There are already hundreds of studies underway around the world looking into how demographics, pre-existing conditions and genetics might affect the wide variation in impact.

Doctors in Saudi Arabia are studying whether genetic differences may help explain varying levels of severity in Covid-19 cases among Saudi Arabs, while scientists in Brazil are looking into the relationship between genetics and Covid-19 complications. Teams in multiple countries are studying if common hypertension medications might worsen the disease’s severity and whether a particular tuberculosis vaccine might do the opposite.

Many developing nations with hot climates and young populations have escaped the worst, suggesting that temperature and demographics could be factors. But countries like Peru, Indonesia and Brazil, tropical countries in the throes of growing epidemics, throw cold water on that idea.

One theory that is unproven but impossible to refute: maybe the virus just hasn’t reached those countries yet. Russia and Turkey appeared to be fine until, suddenly, they were not.

Time may still prove the greatest equaliser: The Spanish flu that broke out in the US in 1918 seemed to die down during the summer only to come roaring back with a deadlier strain in autumn, and a third wave the following year. It eventually reached far-flung places like islands in Alaska and the South Pacific and infected a third of the world’s population.

“We are really early in this disease,” said Dr Ashish Jha, the director of the Harvard Global Health Research Institute. “If this were a baseball game, it would be the second innings and there’s no reason to think that by the ninth inning the rest of the world that looks now like it hasn’t been affected won’t become like other places.”

Doctors who study infectious diseases around the world say they do not have enough data yet to get a full epidemiological picture, and that gaps in information in many countries make it dangerous to draw conclusions. Testing is woeful in many places, leading to vast underestimates of the virus’s progress, and deaths are almost certainly undercounted.

Still, the broad patterns are clear. Even in places with abysmal record-keeping and broken health systems, mass burials or hospitals turning away sick people by the thousands would be hard to miss, and a number of places are just not seeing them — at least not yet.

Interviews with more than two dozen infectious disease experts, health officials, epidemiologists and academics around the globe suggest four main factors that could help explain where the virus thrives and where it doesn’t: demographics, culture, environment and the speed of government responses.

Each possible explanation comes with considerable caveats and confounding counter-evidence. If an ageing population is the most vulnerable, for instance, Japan should be at the top of the list. It is far from it. Nonetheless these are the factors that experts find the most persuasive.

Many countries that have escaped mass epidemics have relatively younger populations.

Young people are more likely to contract mild or asymptomatic cases that are less transmissible to others, said Robert Bollinger, a professor of infectious diseases at the Johns Hopkins School of Medicine. And they are less likely to have certain health problems that can make Covid-19, the disease caused by the coronavirus, particularly deadly, according to the World Health Organisation.

Africa — with about 45,000 reported cases, a tiny fraction of its 1.3 billion people — is the world’s youngest continent, with more than 60 per cent of its population under age 25. In Thailand and Najaf, Iraq, local health officials found that the 20-to-29 age group had the highest rate of infection but often showed few symptoms.

By contrast, the national median age in Italy, one of the hardest hit countries, is more than 45. The average age of those who died of Covid-19 there was around 80.

Younger people tend to have stronger immune systems, which can result in milder symptoms, said Josip Car, an expert in population and global health at Nanyang Technological University in Singapore.

In Singapore and Saudi Arabia, for instance, most of the infections are among foreign migrant workers, many of them living in cramped dormitories. However, many of those workers are young and fit, and have not required hospitalisation.

Along with youth, relative good health can lessen the impact of the virus among those who are infected, while certain pre-existing conditions — notably hypertension, diabetes and obesity — can worsen the severity, researchers in the US say.

There are notable exceptions to the demographic theory. Japan, with the world’s oldest average population, has recorded fewer than 520 deaths, although its caseload has risen with increased testing.

The Guayas region of Ecuador, the epicentre of an outbreak that may have claimed up to 7,000 lives, is one of the youngest in the country, with only 11 per cent of its residents over 60 years old.

And Dr Jha of Harvard warns that some young people who are not showing symptoms are also highly contagious for reasons that are not well understood.

Cultural factors, like the social distancing that is built into certain societies, may give some countries more protection, epidemiologists said.

In Thailand and India, where virus numbers are relatively low, people greet each other at a distance, with palms joined together as in prayer. In Japan and South Korea, people bow, and long before the coronavirus arrived, they tended to wear face masks when feeling unwell.

In much of the developing world, the custom of caring for the elderly at home leads to fewer nursing homes, which have been tinder for tragic outbreaks in the West.

However, there are notable exceptions to the cultural distancing theory. In many parts of West Asia, such as Iraq and the Persian Gulf countries, men often embrace or shake hands on meeting, yet most are not getting sick.

What might be called “national distancing” has also proven advantageous. Countries that are relatively isolated have reaped health benefits from their seclusion.

Far-flung nations, such as some in the South Pacific and parts of sub-Saharan Africa, have not been as inundated with visitors bringing the virus with them. Health experts in Africa cite limited travel from abroad as perhaps the main reason for the continent’s relatively low infection rate.

Countries that are less accessible for political reasons, like Venezuela, or because of conflict, like Syria and Libya, have also been somewhat shielded by the lack of travelers, as have countries like Lebanon and Iraq, which have endured widespread protests in recent months.

The lack of public transportation in developing countries may have also reduced the spread of the virus there.

The geography of the outbreak — which spread rapidly during the winter in temperate zone countries like Italy and the US and was virtually unseen in warmer countries such as Chad or Guyana — seemed to suggest that the virus did not take well to heat. Other coronaviruses, such as ones that cause the common cold, are less contagious in warmer, moist climates.

But researchers say the idea that hot weather alone can repel the virus is wishful thinking.

Some of the worst outbreaks in the developing world have been in places like the Amazonas region of Brazil, as tropical a place as any.

“The best guess is that summer conditions will help but are unlikely by themselves to lead to significant slowing of growth or to a decline in cases,” said Marc Lipsitch, the director of the Center for Communicable Disease Dynamics at Harvard University.

The virus that causes Covid-19 appears to be so contagious as to mitigate any beneficial effect of heat and humidity, said Dr Raul Rabadan, a computational biologist at Columbia University.

But other aspects of warm climates, like people spending more time outside, could help.

The ultraviolet rays of direct sunlight inhibit this coronavirus, according to a study by ecological modelers at the University of Connecticut. So surfaces in sunny places may be less likely to remain contaminated, but transmission usually occurs through contact with an infected person, not by touching a surface.

No scientist has proposed that beaming light inside an infected person, as President Trump has suggested, would be an effective cure. And tropical conditions may have even lulled some people into a false sense of security.

“People were saying ‘It’s hot here, nothing will happen to me,’” said Dr Doménica Cevallos, a medical investigator in Ecuador. “Some were even going out on purpose to sunbathe, thinking it would protect them from infection.”

Countries that locked down early, like Vietnam and Greece, have been able to avoid out-of-control contagions, evidence of the power of strict social distancing and quarantines to contain the virus.

In Africa, countries with bitter experience with killers like HIV, drug-resistant tuberculosis and Ebola knew the drill and reacted quickly.

Airport staff from Sierra Leone to Uganda were taking temperatures (since found to be a less effective measure) and contact details and wearing masks long before their counterparts in the US and Europe took such precautions.

All this happened in a region where health ministries had come to rely on money, personnel and supplies from foreign donors, many of which had to turn their attention to outbreaks in their own countries, said Catherine Kyobutungi, executive director of the African Population and Health Research Center.

“Countries wake up one day and they’re like, ‘OK, the weight of the country rests on our shoulders, so we need to step up,’” she said. “And they have. Some of the responses have been beautiful to behold, honestly.”

Sierra Leone repurposed disease-tracking protocols that had been established in the wake of the Ebola outbreak in 2014, in which almost 4,000 people died there. The government set up emergency operations centres in every district and recruited 14,000 community health workers, 1,500 of whom are being trained as contact tracers, even though Sierra Leone has only about 155 confirmed cases.

It is not clear, however, who will pay for their salaries or for expenses like motorcycles and raincoats to keep them operating during the coming wet season.

Uganda, which also suffered during the Ebola contagion, quickly quarantined travelers from Dubai after the first case of coronavirus arrived from there. Authorities also tracked down about 800 others who had travelled from Dubai in previous weeks.

The Ugandan health authorities are also testing around 1,000 truck drivers a day. But many of those who test positive have come from Tanzania and Kenya, countries that are not monitoring as aggressively, leading to worries that the virus will keep penetrating porous borders.

Lockdowns, with bans on religious conclaves and spectator sporting events, clearly work, the WHO says.