The US President had turned down a similar deal in December, forcing the 35-day partial shutdown 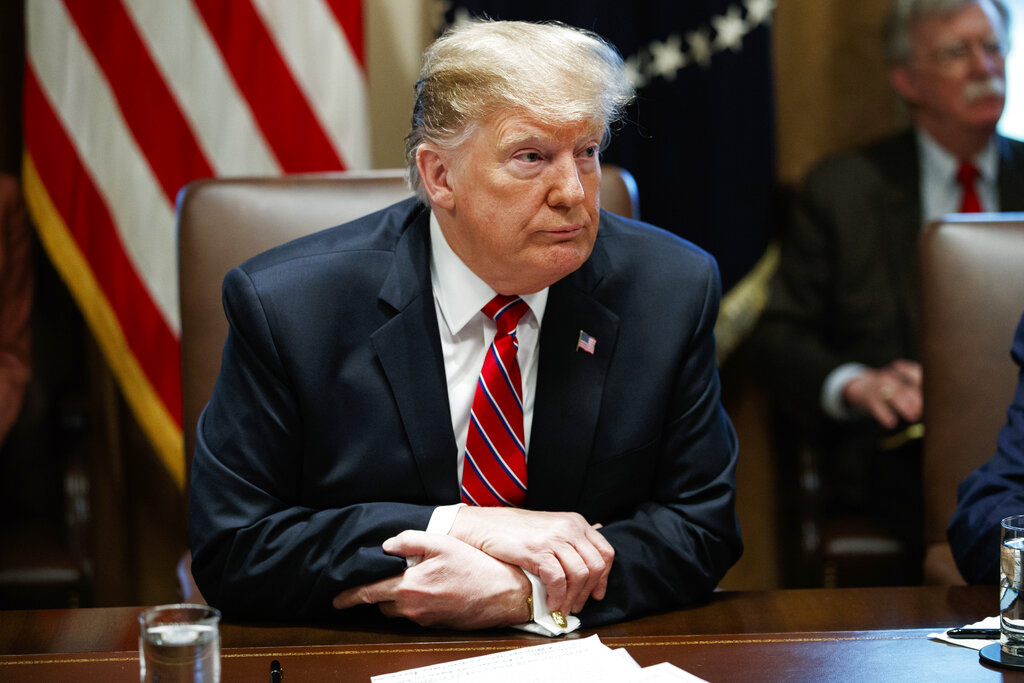 President Donald Trump isn't showing his hand yet. But with little Washington appetite for another shutdown, he's expected to grudgingly accept an agreement that would keep the government open but provide just a fraction of the money he's been demanding for his Mexican border wall.

Addressing the deal at the White House Wednesday, Trump said he would be taking 'a very serious look' at the text when the White House receives it from Congress. Lawmakers on Capitol Hill were still haggling over final details, but they appeared on track to finish soon.

'We're going to look at the legislation when it comes and I'll make a determination,' Trump said, telling reporters he'd be looking out for any 'land mines.'

Still, he reiterated his aversion to another shutdown, the likely result if he rejects the agreement, saying one would be 'a terrible thing.'

White House officials cautioned on Wednesday that they have yet to receive full legislative language. And Trump has a history of suddenly balking at deals after signalling he would sign them. But barring any major changes, he is nonetheless expected to acquiesce, according to two White House officials and other Republicans close to the White House who spoke on condition of anonymity because they weren't authorised to speak publicly.

Trump and his aides have also signalled that he is preparing to use executive action to try to secure additional funding for the wall by shifting federal dollars without congressional sign-off.

Accepting the deal, worked out by congressional negotiators from both parties, would be a disappointment for a president who has repeatedly insisted he needs $5.7 billion for a barrier along the US-Mexico border and painted the project as paramount for national security. Trump turned down a similar deal in December, forcing the 35-day partial shutdown that left hundreds of thousands of federal workers without paychecks and Republicans reeling.

Lawmakers tentatively agreed to a deal that would provide nearly $1.4 billion for border barriers and keep the government funded for the rest of the fiscal year, which ends on September 30. Filling in the details has taken some time, as is typical, and aides reported Wednesday that the measure had hit some snags, though they doubted they would prove fatal.

Last-minute hang-ups include whether to include a simple extension of the Violence Against Women Act as Senate Republicans want or move a new, longer-term bill separately, as House Speaker Nancy Pelosi, is pushing.

Democrats are also pressing to try to make sure employees of federal contractors receive back pay for wages lost during the last shutdown. The continued haggling means that a House vote can't come before Thursday night, at the earliest.

Given the back-and-forth, Press Secretary Sarah Sanders told reporters the president was awaiting a final version before making a final call.

'We want to see the final piece of legislation, and we'll make a determination at that point,' she said Wednesday.

Trump added that, no matter what, 'The wall is being built as we speak.'

'We're going to have a great wall. It's going to be a great, powerful wall,' he said.

In conversations with allies, however, Trump has complained about the deal, calling the committee members poor negotiators, said a person familiar with the conversations who was not authorised to speak publicly. Trump has also made clear that he'd wanted more money for the wall and has expressed concern the plan is being spun as a defeat for him in the media.

Still, allies believe the president has little choice but to sign and move on.

Assuming there are no surprises in the final text, 'I think he's going to sign it,' conservative Representative Mark Meadows, a Republican from North Carolina, a close ally of the president, told reporters Wednesday. But he warned that 'it would be political suicide' if Trump signed the deal and then failed to take additional action to secure more funding for the wall.

The agreement would allow 88 kilometers of new fencing — constructed using existing designs such as metal slats— but far less than the 345 kilometers the White House demanded in December. The fencing would be built in Texas' Rio Grande Valley.

Full details were not expected to be released until later Wednesday as lawmakers worked to translate their verbal agreement into legislation. But Republicans have urged Trump to sign on.

'I hope he signs the bill,' said Senate Majority Leader Mitch McConnell, who joined other GOP leaders in selling it as a necessary compromise that represented a major concession from Democrats.

Lawmakers need to pass some kind of funding bill to avoid another shutdown at midnight Friday and have worked to avoid turning to another short-term bill that would only prolong the border debate.

Speaking at a Cabinet meeting Tuesday, Trump said he wasn't 'thrilled' or happy with the plan, but needed more time to study it. He also made clear that, if he does sign the deal, he is strongly considering supplementing it by moving money from what he described as less important areas of government.

The White House has long been laying the groundwork for Trump to use executive action to bypass Congress and divert money into wall construction. He could declare a national emergency or invoke other executive authority to tap funds including money set aside for military construction, disaster relief and counterdrug efforts.

Previewing that strategy last week, acting White House Chief of Staff Mick Mulvaney said, 'We'll take as much money as you can give us, and then we will go off and find the money someplace else — legally — in order to secure that southern barrier.' He said more than $5.7 billion in available funds had been identified.

McConnell, who had previously said he was troubled by the concept of declaring a national emergency, said Tuesday that Trump 'ought to feel free to use whatever tools he can legally use to enhance his effort to secure the border.'