Nearly two months after flooding, communities hoping to rebuild are still waiting for much-needed financial aid from the government 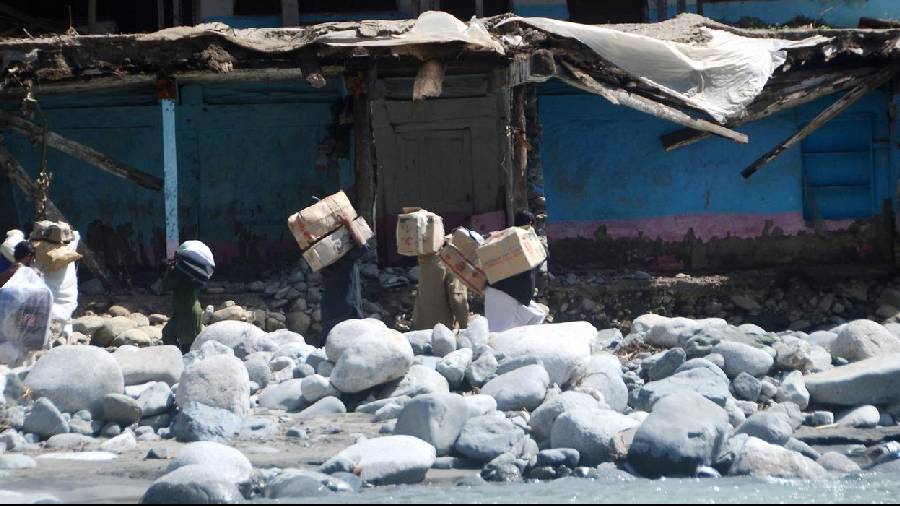 Across Pakistan, over 1,700 people were killed in the flooding and huge areas of farmland were destroyed
Deutsche Welle
Deutsche Welle   |   Published 21.10.22, 05:31 PM

Zaman Khan's simple mud and clay home in Pakistan's northwest Khyber Pakhtunkhwa province was washed away by record monsoon flooding in August. He wants to return but cannot afford to rebuild.

He is one of many flood victims in the decimated Swat River valley who are still waiting for financial aid promised by the government for repairs and reconstruction. Khan, a 38-year-old who works in a plum orchard, said he is growing desperate.

"The little I had saved as a lowly paid worker has been exhausted. The cash handout promised by the government is the only ray of hope for me to rebuild the house and pick up the pieces of my life," he told DW.

Khan, his wife and seven children are living in two tents pitched on his relatives' property outside of the Swat district capital of Saidu Sharif. All the rooms in the house are occupied.

Swat was one of Khyber Pakhtunkhwa's worst-hit districts. In the aftermath, the provincial government carried out rescue and relief operations, and the federal government announced individual payments to compensate for the death of family members and help repair destroyed property.

In Khyber Pakhtunkhwa province, over 300 people were killed and over 70,000 houses were either damaged or destroyed, along with livestock and crops.

Across Pakistan, over 1,700 people were killed in the flooding and huge areas of farmland were destroyed.

Although compensation for deaths was paid quickly, people are still waiting for repair and reconstruction aid. After Khan asked for aid to repair his home, he was told disbursements would begin only after the completion of an ongoing damage assessment survey.

"Our hosts are very caring and try their best to cater to our basic needs, but we still need cash for other essential goods. Given their fast-shrinking financial resources, I fear that we will become a burden on them soon." he said.

Another flood victim, 56-year-old Kanizaan Bibi, told DW she is living in a damaged home she is unable to repair, and worries it will not be fixed in time before the winter sets in. Her husband and sons are also out of work due to the floods.

Why are funds being delayed?

Taimur Khan Jhagra, Khyber Pakhtunkhwa's provincial finance minister, has said that displaced people are no longer living in temporary camps set up by the government. However, aid organizations point out this doesn't mean people have returned to their homes.

"I agree that the province no more has temporary shelters put up by either the government or private organizations, but that doesn't mean that their occupants have resumed normal life," Khalid Waqas Chamkani, the provincial president for the NGO Al-Khidmat Foundation, told DW.

"Unfortunately, most flood victims are still in dire straits due to a long delay in the payment of cash handouts that has forced them to either go back to their damaged houses or stay with relatives in cities and towns," he added.

Chamkani believes the Bank of Khyber has already received government funds for flood compensation but the money has yet to be disbursed.

Taimur Ali, a spokesperson for the Khyber Pakhtunkhwa Provincial Disaster Management Authority, acknowledged a "delay" in the disbursement of house damage compensation.

He attributed the delay to a high workload at Bank of Khyber, and the unavailability of bank branches in flood-hit areas.

Ali told DW that disbursement of aid to victims depended on a biometric verification system, which many people are not aware of. He added that money had been paid out in the areas where the biometric survey was completed.

He said the government had directed the Bank of Khyber to open proper or mobile branches without delay to reach out to those entitled to compensation.

The government "wants to wrap up this payment exercise by the start of the winter season early next month," he said.