58 people have died in the neighbouring country 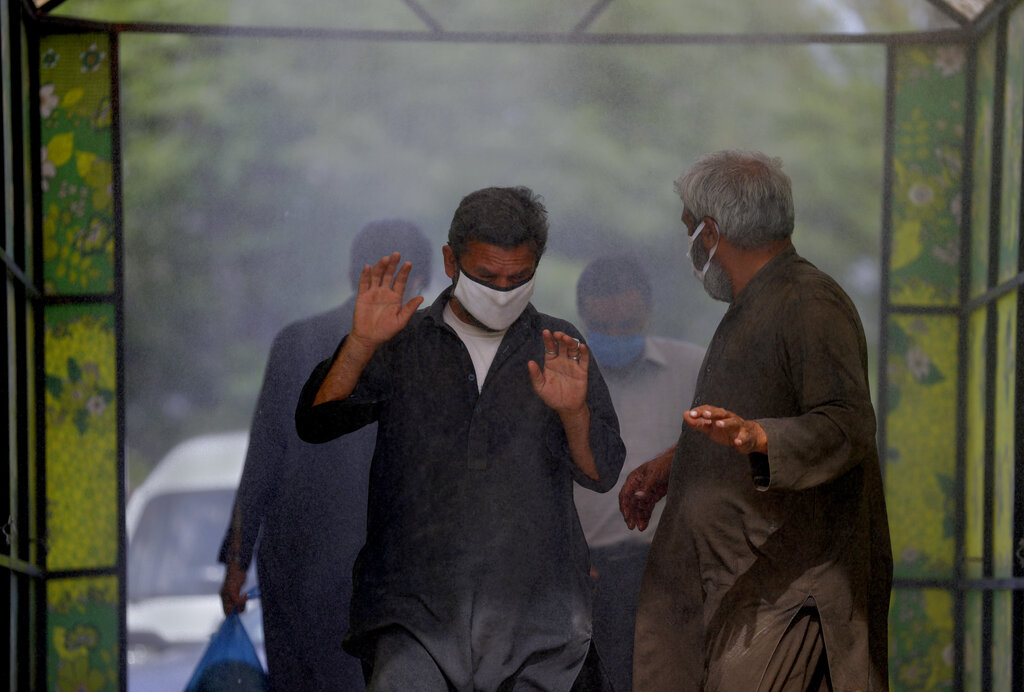 People walk through a disinfecting tunnel setup at an entrance to a wholesale vegetable and fruit market to help curb the spread of the coronavirus, in Islamabad, Pakistan, Monday, April 6, 2020.
AP
PTI   |   Islamabad   |   Published 08.04.20, 08:15 AM

Pakistan's novel coronavirus cases rose to 4,072 on Wednesday even as Army chief General Qamar Javed Bajwa directed his top commanders to provide full support to the federal and provincial governments in combating the pandemic which has killed 58 people in the country.

The ministry of National Health Services in its morning update said that 208 new Covid-19 patients were added to the list during the last 24 hours.

So far 58 patients have died, including four in the last 24 hours, while 467 had recovered. Another 25 were reported to be in critical condition.

The province and region wise data of cases was not available on the ministry's website as it was being updated.

However, private media and official sources reported that number of patients in Punjab has risen to 2,030, Sindh 986, Khyber-Pakhtunkhwa 527, Gilgit-Baltistan 212, Balochistan 206, Islamabad 83 and Pakistan-occupied Kashmir 28.

Pakistan was making frantic efforts to tackle the pandemic and Prime Minister Imran Khan once again warned the people to follow official guidelines on self-isolation or the virus would spread further.

Army chief Gen Bajwa held a meeting with his top Generals on Tuesday during which he reviewed geo strategic, regional and national security issues with particular emphasis on latest situation arising from COVID-19, said a statement issued by the army.

The generals, who attended the meeting through video link from respective Headquarters, reviewed the deployment of troops assisting civil administration across the country.

Appreciating the troops in the field for efforts so far, COAS directed all commanders to extend maximum assistance in moving critical resources and reaching out to mitigate suffering of people in far flung areas, the statement said.

Inspector-general (Prisons) Shahid Baig told PTI that some 20 cases have been reported in the camp jail Lahore and the remaining in others.

Baig said the outbreak stemmed from a Pakistani citizen who was arrested over narcotics smuggling in Italy and handed over to Pakistan last month. He was diagnosed on March 23.

The government has extended partial lockdown till April 14 and constantly asking people to stay indoors and follow social distancing.

Meanwhile, Balochistan Young Doctors Association (YDA) in Balochistan province has announced to resume services after successful talks with the government.

The YDA was on strike due to lack of protective kits and against police brutality after their rally was baton-charged and several of their colleagues were taken in custody earlier this week.

Provincial Agriculture Minister Zamrak Khan Achakzai said an inquiry will be held against the persons who used violence against the protesting doctors.