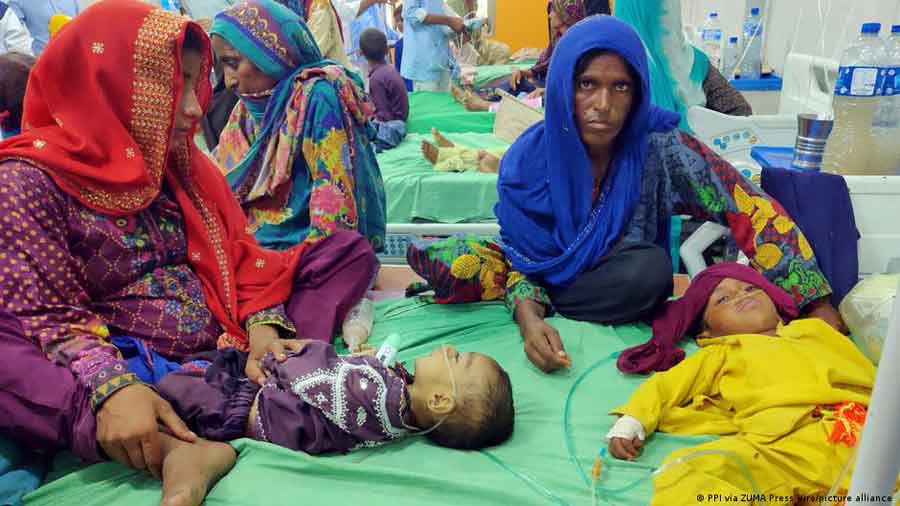 Pakistan desperately needs help after more people died of water-borne diseases due to catastrophic floods that had submerged a third of the South Asian country.

"We need help. We need food for children and medicines," Pakistan's Prime Minister Shehbaz Sharif said on Wednesday on the sidelines of the UN General Assembly in New York. Heavy monsoon rains have submerged large parts of the country, killing more than 1,500 people and affecting roughly 33 million people.

Diseases like cholera, diarrhea, skin allergies, malaria, dengue fever, and dysentery added to the death toll. "We are deeply worried about the very real possibility of a wave of death and disease which is already stretching its tentacles. A second disaster is looming in sight," the United Nations children's agency UNICEF said.

The agency renewed its appeal for $39 million to help the most vulnerable flood victims.

Only a third of the sum in the funding appeal has been met so far, UNICEF said in a statement. UNICEF said more than 3.4 million children had been uprooted from their homes, and the floodwaters have claimed the lives of more than 550 children across Pakistan.

"Without a significant surge in support, we fear many more children will lose their lives," UNICEF said.

On Wednesday, several world leaders who spoke at the UN General Assembly hinted at climate change's role in the country's flooding.

"We don't have much time left," he added. "We all know we're already living in a climate crisis." Nigerian President Muhammadu Buhari says developing countries are "literally paying the price" when it comes to climate change.

"Africa and other developing nations produce only a small proportion of greenhouse gas emissions compared to industrial economies. Yet we are the hardest hit by the consequences of climate change as we see in the sustained droughts in Somalia and floods of unprecedented severity in Pakistan," he told the General Assembly.

On Tuesday, UN Secretary-General Antonio Guterres told world leaders the climate crisis was the defining issue of our time.

"And yet climate action is being put on the back burner – despite overwhelming public support around the world." "We have a rendezvous with climate disaster, he said, recalling his recent visit to Pakistan, "where I saw with my own eyes...that one-third of the country is submerged by a monsoon on steroids."