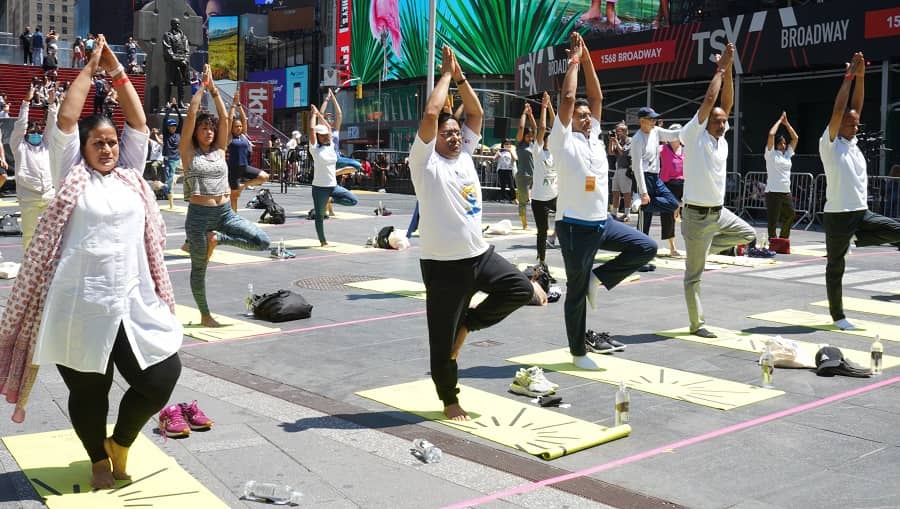 Over 3,000 people spread their mats at the iconic Times Square here and performed Yoga asanas keeping in mind social distancing guidelines to celebrate the International Yoga Day as the city opens up following the COVID-19 pandemic.

The Consulate General of India, New York in partnership with Times Square Alliance hosted the 7th International Day of Yoga celebrations on Sunday at the popular city destination, known as the crossroads of the world. The day-long celebration themed as Solstice Event was attended by more than 3000 people.

The International Yoga day is commemorated with much enthusiasm and fanfare at Times Square every year. As the city opened up following the COVID-19 pandemic, people turned out in huge numbers for the day-long celebration that included yoga, meditation and exercise sessions by renowned yoga practitioners.

With Yoga mats spread out keeping in mind social distancing guidelines, people from various walks of life and nationalities performed Yoga asanas and exercises in the middle of Times Square, surrounded by its distinctive giant and towering LED screens as people and tourists stopped to look and participate in the commemoration.

Jaiswal, joined by Deputy Consul General Shatrughna Sinha and senior officials from the Consulate, as well as members of the Indian diaspora, also participated in the yoga sessions conducted during the commemoration. Leading Yoga instructor Ruchika Lal led a Yoga, Pranayama and Meditation session during the day.

Yoga is about health, but it's also about a lifestyle. Yoga has various interpretations, dimensions - spirituality, health and philosophy. We must celebrate yoga today, tomorrow and for all times.

Yoga is about health. Yoga is about living in harmony with nature. Yoga is about unity and togetherness. That is what Times Square represents. And most important of all, yoga enables you to experience the human self in the deepest form, Jaiswal said.

In keeping with this year's theme Yoga for Wellness', the event showcased holistic health, Ayurvedic and nature based wellness products from Tribes India (TRIFED) and other Indian companies. The stalls attracted a large number of visitors, who were eager to learn about the uniqueness of Indian tribal, Ayurvedic and natural products, the Consulate said.

In the run-up to the International Yoga Day celebrations on June 21, the Consulate General in New York, in partnership with Friends of Yoga, had organised several virtual and in-person yoga events and sessions throughout the month across New York and neighboring states such as New Jersey and Pennsylvania.

The International Day of Yoga was also celebrated in New Jersey at the Liberty State Park with the Statue of Liberty in the background. This was a community led event anchored by the Federation of Indian Associations where renowned yoga instructor Thara Natalie led the yoga session.