Advertisement
Home / World / Out of cash and fuel, Sri Lanka runs on patience

Out of cash and fuel, Sri Lanka runs on patience

The parliament will vote for a successor on Wednesday, and the country is closely watching whether the politicians can put aside their bickering to find a path to economic relief 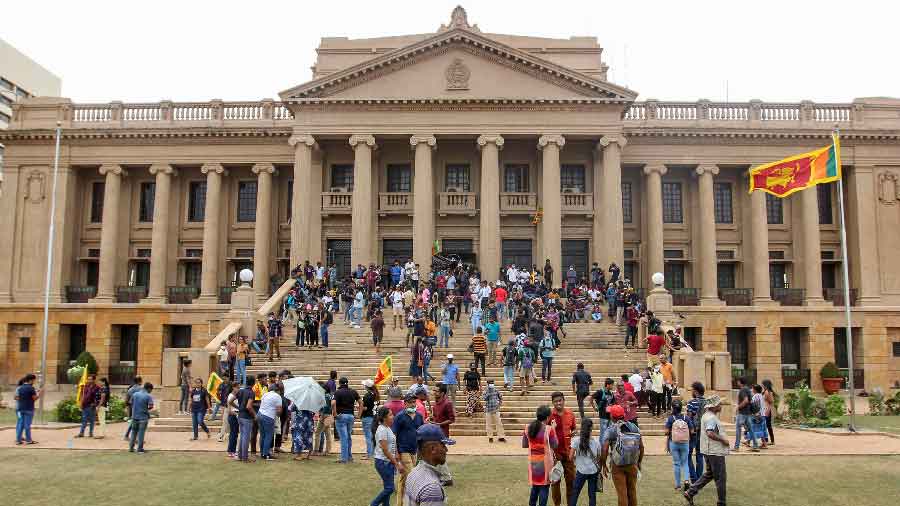 People have been queuing up for cooking gas, milk powder, and meals at soup kitchens, without fights or friction
File Photo
Mujib Mashal, Emily Schmall, Skandha Gunasekara   |   Colombo   |   Published 20.07.22, 12:47 AM

The queues are ubiquitous — and orderly. To get five litres of gasoline, auto-rickshaw drivers wait calmly in line for as long as five days. People have been queuing up for cooking gas, milk powder, and meals at soup kitchens, without fights or friction. Each day, essential workers, in hospitals, sanitation, post offices and banks, tolerate cramming into buses, one of the only means of transport with an assured supply of fuel.

“Without hanging? It’s 110 people,” bus driver M.P.L.K. Saman, 32, said about the number of passengers he packs in for the 15-mile journey between Colombo and Dompe in the east. “With hanging? 150 people.” The country is running on patience, even as the political and economic crisis intensifies. The former President, Gotabaya Rajapaksa, went into hiding after protesters stormed his residence and office last week, and then he fled the country on a military plane.

The parliament will vote for a successor on Wednesday, and the country is closely watching whether the politicians can put aside their bickering to find a path to economic relief. A fuel shortage, rising global food prices and the shock of erratic climate patterns, compounded by crushing policy mistakes and the coronavirus pandemic, have created a crisis with no easy solution. “Look no further than Sri Lanka as a warning sign,” said Kristalina Georgieva, the managing director of the International Monetary Fund. “Countries with high debt levels and limited policy space will face additional strains.”

But Sri Lanka might be unique in one thing: The rage at the failure and corruption of a ruling elite has been matched by generosity and ingenuity to prevent complete collapse and anarchy. Hospitals are still functioning. Sanitation trucks still roam the city’s neat streets, even if less often. The three-hour power cuts are announced in detailed schedules a day ahead. At the peak of the anger last week, thousands stormed the President’s mansion and several other top government buildings. But soon after, Sri Lankans went back to queues, patiently waiting outside the palaces for their turn to get a peek. The country is increasingly dependent on the goodness of others, donors, lenders — really any person or institution with the funds to help.

To bridge the gap in medical supplies, hospital administrators often put out lists of needed supplies and mobilise donations. At the Lady Ridgeway Hospital, where the country’s sickest children come for open-heart surgeries, kidney transplants and other complicated procedures, 40 per cent of their essential medicine and surgical equipment are from donors abroad. Every week, the hospital posts a list of needed items on its website and a link to its charity account. Dr G. Wijesurija, the hospital’s top administrator, said that the hospital had not lost any patients in the 1,600-bed facility because of the country’s shortages.

“But if the donors were not here, we would have to compromise our services,” he said. The government itself is scrounging for what it needs. Sumila Wanaguru, an economist at Sri Lanka’s central bank, analyses cash flow each day to determine what can be spared. Tourism and remittances — Sri Lanka’s main sources of foreign currency — have largely evaporated. When the government ran out of money to import the essentials last spring, it tapped the central bank’s reserves, which in recent months have hovered around zero. Dr Wanaguru, director of the international operations department, and others at the central bank have had to beg and plead for lines of credit, debt deferments and currency swaps to get the hundreds of millions of dollars needed every month to import the bare minimum to keep the country afloat. Officials have forced exporters to exchange a portion of their profits in foreign currency to the bank.

When the World Bank gave the government $130 million for a cash transfer programme for the country’s poorest, Dr Wanaguru swapped the money for rupees, adding US dollars to the bank’s reserves. “We are running the country without foreign exchange inflow,” she said. After the rating agency downgraded Sri Lanka’s debt last spring, some suppliers of diesel and other commodities started demanding upfront payments. The situation has worsened since Sri Lanka defaulted on its debt in May, losing access to capital markets.

Dr Wanaguru has to regularly authorise and arrange enormous cash transactions for trade. Import companies meet ships carrying desperately needed cargoes of fuel at the Port of Colombo with stacks of cash. “Everybody is looking at the central bank all the time, but it can’t do everything. That is why we have government and ministries who must sit together and come up with a national plan,” she said.

“Let’s hope they learn a good lesson.” If there is one business that is flourishing, it is the bus business — public and private. But that, too, has required constant troubleshooting. Transportation problems have become so commonplace that radio DJs joke about waiting four hours for a bus to arrive, or not making it to work at all when it never comes. Officials at Sri Lanka Transport Board said public and private buses ferry about 1.5 million passengers a day in Colombo and its greater suburbs. The transit board has ensured that the government will provide a separate and steady stream of diesel for both the public and private buses so that transport does not collapse entirely.

“The price of spare parts has doubled,” said KingsleyRanawaka, the chairman of the transport board. “A tire that was 70,000 rupees is now 160,000 rupees.” The bus stops, at the end of a day of work, are both signs of problems and perseverance. While buses have always been key to the city’s transport, the demographic at the bus stops is changing, in a country where the middle class is on pause. Among those waiting to get home was Praneeth Anuruddha, 33, who has worked as a banker for a little over a decade. Two years ago, he had bought a car — a Toyota Axio— for his small family, consisting of his wife and 4-year-old child. He would park his car at the bank’s premises.

“At the time I never thought I’d have to use the bus again,” he said with a smile. But for the past week, Anuruddha has parked his car at home, with just “one tick”of fuel remaining for family emergencies. His bag dangling on his shoulder, he inched closer to a bus that arrived. “It’s too crowded,” he said. “I will wait for the next one.”